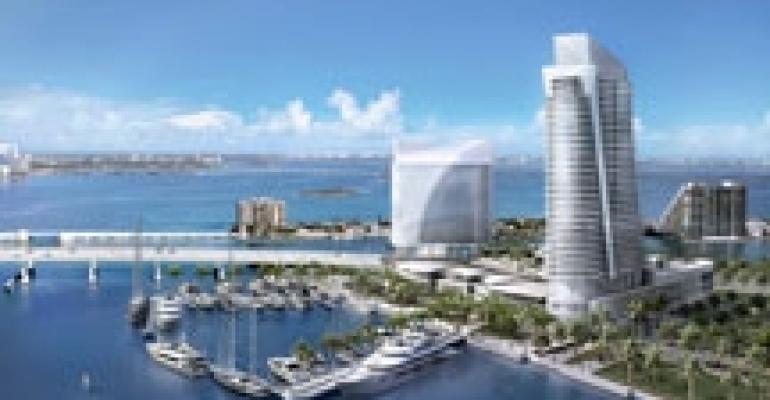 When Mehmet Bayraktar, chairman and CEO of Flagstone Property Group, pushed his shovel into the earth to break ground on his $640 million Island Gardens project in Miami this October, it marked the culmination of seven long years of preparation.

Certainly Bayraktar’s joint venture partner, institutional investor ING Clarion Partners, hopes success is on the horizon. ING Clarion, a New York-based real estate investment advisory firm, plowed $200 million into the project for a 35% equity stake in December 2007. “Island Gardens is truly a unique project,” says Edward Rotter, managing director at ING Clarion. “With its potential to transform the Miami skyline, we expect the complex to become one of the premier leisure and hospitality addresses in the city.”

Slated for completion in fall 2011, Island Gardens will feature a 50-slip harbor to accommodate yachts from 80 feet to over 400 feet in length; a 150-room Shangri-La Hotel, marking the chain’s entry into the American market; a private residence club with 98 fractional ownership units including floor plans with one to four bedrooms managed by Shangri-La; a spa; 221,000 sq. ft. of high-end retail space; dining; a fish market; leisure gardens and a maritime gallery.

If Bayraktar has his way, the mixed-use, hotel-condo development situated on 24 acres of prime land on Watson Island across from the Port of Miami cruise ship terminal, will become a haven for the super rich and their mega-yachts. “It was the perfect location in terms of real estate, but it was also difficult to do something there,” he says.

The City of Miami approved Bayraktar’s plans in 2001 after a lengthy RFP process. An international investor with real estate projects in the Mediterranean and Europe, the Turkish-born and U.S. educated Bayraktar took deed to the Watson Island land from the city under a 75-year ground lease. During the recent groundbreaking, Miami Mayor Manny Diaz praised the project. “With their investment, Flagstone Property Group and ING Clarion are highlighting Miami’s healthy business climate and ability to attract new business.”

As site work begins, Bayraktar continues his quest for the balance of construction funding. According to Bayraktar, loan agreements are being drafted for several components of the project, while others have been committed and approved by a lead bank and are in the process of being syndicated.

Meanwhile, the project has drawn skepticism among South Florida’s market watchers. “I think that the project has good potential, but I would recommend that a client not begin development until after 2011,” says Lewis Goodkin, president of Miami-based Goodkin Consulting and a leading analyst of the South Florida real estate market for the past 30 years.

“The condominium market continues to deteriorate with growing foreclosures, price declines and low demand. [Flagstone’s] concept is very ambitious, but should be well received if the market timing is right. But I don't believe that their timing meshes with the realities of the market globally,” adds Goodkin.

But despite the skeptics, Bayraktar insists the timing is right for this deal. “It’s not like we decided two months ago [to start this], when everything was going down to hell. This opportunity comes along every 80 to 100 years. This is so unique,” says Bayraktar. “The build-out is three years. We know that what’s happening now in the markets is not going to go on for three years.”

Even in 2005 when Bayraktar was preparing to search for investor partners, he was convinced that a high level of equity was needed. “From the beginning, even when everything was so rosy, we knew we wanted to have at least 35% equity. People were asking us why we did that and not 90%. But with this sort of project, we knew it needed that sort of depth,” emphasizes Bayraktar. “There are only a handful of banks that could lend the kind of money we needed, and they were one of them.”