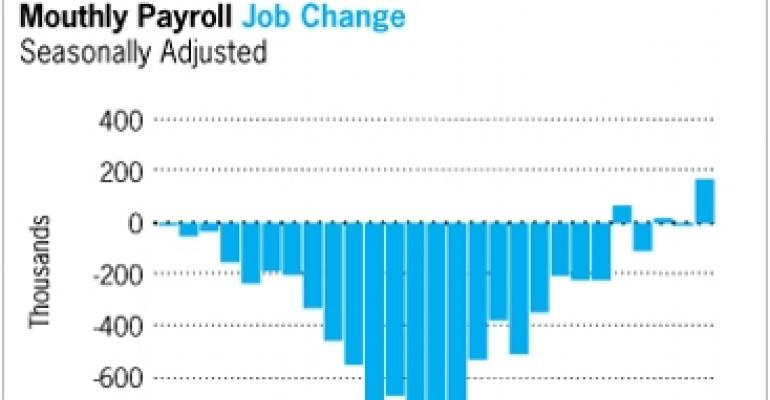 How Should We Interpret the March Jobs Report?

The March employment report released by the U.S. Bureau of Labor Statistics may have fallen somewhat short of Wall Street’s expectations, but the 162,000 gain in nonfarm payrolls provides indisputable evidence that the economy is on the mend. The leisure and hospitality sector, for example, added 22,000 jobs in March, while retailers added nearly 15,000 jobs. That’s encouraging news for commercial real estate.

Tempering the optimism are a few factors. The growth in payrolls in March includes the hiring of 48,000 temporary workers to conduct the decennial census. Most compelling is that the government's broader measure of unemployment — which takes into account people who have stopped looking or who can't find full-time jobs — shows an unemployment rate of 16.9%. In addition, some 6.5 million workers have been unemployed for 27 weeks or longer.

Victor Calanog, director of research at New York-based real estate researcher Reis:
“The last few months have consistently implied that the hemorrhage of job losses has slowed. Although March experienced a net gain in nonfarm payrolls, skeptics like pointing out that the largest gains were in temporary hiring, up 40,200, and that finance and information industries posted losses of 21,000 and 12,000, respectively.

“However, economic stabilization often progresses in fits and starts, and we should expect to see more of the checkered results like the March figures show, with some employment categories posting gains and some posting losses.

“Expect a roller-coaster ride over the next few months as the hiring by the U.S. Census Bureau ramps up, and then lets go of temporary workers as processing work winds down. We should also expect a slow journey back to previous employment level peaks. As of February, we're back to employment levels last seen in August 1999.

“Even if the economy adds a healthy 200,000 jobs per month, it will still take three and a half years to regain the 8.4 million jobs we lost since December 2007. However, as of March 2010 we've taken the first step by actually posting net gains.”

Bob Bach, chief economist at Chicago-based Grubb & Ellis:
“Private-sector employers were responsible for 123,000 of the 162,000 net new payroll jobs in March. It was the best showing for nonfarm payroll in three years, according to the Bureau of Labor Statistics.

“The manufacturing sector is alive and well. The Institute for Supply Management’s purchasing managers’ index increased to 59.6 in March. That’s the highest level since July 2004. The index has remained above the expansionary threshold of 50 for the past eight months. These and other recent indicators suggest that the recovery is gaining some momentum.