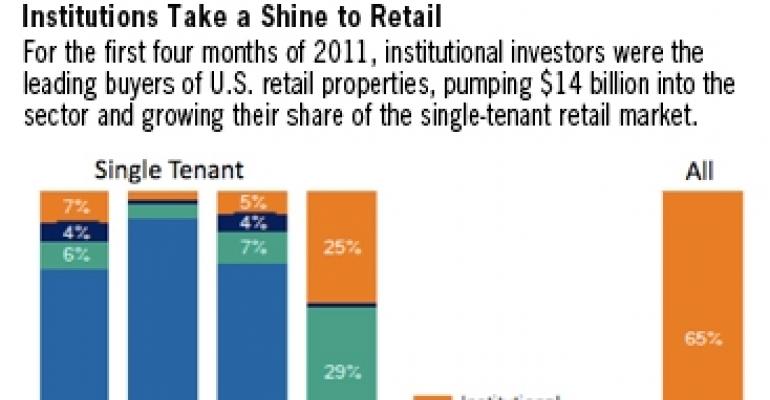 As we approach the halfway mark of 2011, institutional investors have increased their appetite for commercial real estate, overtaking publicly traded real estate investment trusts (REITs) as the leading purchasers of retail and office properties in the first quarter of 2011.

Institutions pumped nearly $14 billion into the retail sector from January through April of this year, according to New York-based real estate research firm Real Capital Analytics. That compares to just $3.2 billion invested in retail properties for all of 2010.

In particular, institutional investors grew their share of the single-tenant retail market from just 5% for all of 2010 to a 25% market share in the first four months of 2011. Their acquisitions totaled $427 million from January through April compared with $161 million for all of last year.

Why are institutional buyers and REITs much more intent on owning single-tenant retail properties than they were a year ago? “There have been more portfolios trading,” says Bob White, president of Real Capital Analytics.

Typically large-scale investors such as institutions are not interested in smaller-dollar transactions, including single-tenant retail.

“But many of the recent REIT/institutional deals have been portfolio sales where there is much more activity this year. Those [deals] were pretty tough to finance a year ago,” notes White. “So some of the rise in institutional and REIT investment is just because portfolios are trading again.”

“I also think that as the economy turns around slowly, the institutional/REIT crowd is feeling a bit more comfortable understanding the [creditworthiness] of the retailers. It wasn’t too long ago that everyone lost faith in credit ratings in general,” says White.

Developers were the largest sellers of retail properties in the first quarter of 2011, according to Christopher Macke, senior real estate strategist at CoStar Group in Washington, D.C. “This is due to their capital constraints and need to decrease their debt loads,” he says.

When it comes to attracting institutional capital, the retail sector has not been alone, as office buildings have also garnered significant attention.

According to CoStar, institutional investors overtook publicly traded REITs as the largest acquirers of U.S. office buildings in the first quarter of the year, a sign of widening demand that may have the net effect of pushing property prices higher.

In fact, institutions were larger purchasers of office buildings than REITs in three of four quarters last year, says CoStar’s Macke. He notes that institutional demand for commercial real estate is on the rise due to the improving economy and relatively low yields being generated in alternative asset classes.

Pension funds, insurance companies and sovereign wealth funds added $1.39 billion of office buildings to their portfolios in the first quarter of 2011. During the same period, acquisitions of office properties by REITs totaled $1.1 billion, according to CoStar.

That represents a dramatic turnaround from a year ago when institutions were net sellers, notes Macke. According to CoStar, investment-grade commercial property prices rose 2.2% in March 2011 from a year ago.

Office sales more than doubled to $10.2 billion in the first quarter from a year earlier, according to Real Capital Analytics.

This additional investment follows the $205 million committed by TRS to LaSalle in 2009. TRS has $108.2 billion in total assets under management.

“Assuming that the institutions continue their net buying and the REITs continue as well, that should portend a positive direction for pricing in commercial real estate,” says Macke.