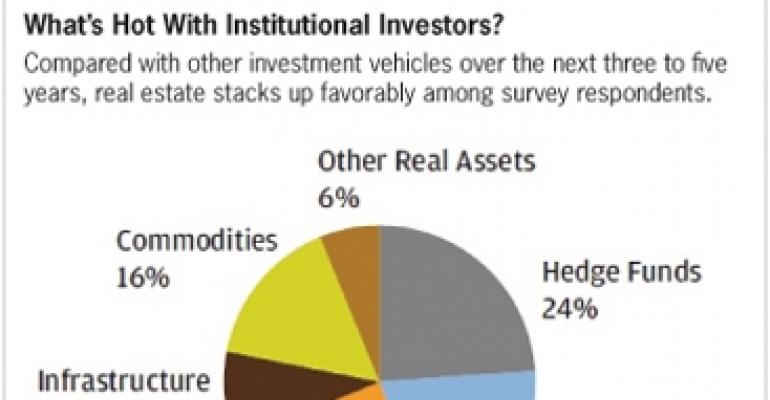 According to a new study on institutions by J.P. Morgan Asset Management — titled “Market Pulse: Alternative Assets Survey” —investors believe commercial real estate could rebound significantly over the next 12 months and are resuming their steady march from so-called “traditional” investments to the “alternative.”

The online survey was conducted in March and April, and included 349 North American investors from 325 institutions, including corporate pension plans, public pension funds, endowments, foundations and others.

“Our results suggest that on balance, given recent experiences and lessons learned, investors have maintained their faith in alternatives and, overall, are expanding allocations to these strategies, seeking greater diversification and a more optimal mix,” says Annette Whittemore, head of market research and development at J.P. Morgan Asset Management.

Investors are expected to funnel more capital into real estate, hedge funds and even private equity over the next two to three years, says Whittemore.

Surprisingly, pension funds are leading the charge to boost their allocation in alternative investments, jumping from an average of 14% of total assets to an expected 21% over the next two to three years. Much of that money will be shifted away from traditional stocks.

Some funds are climbing into the real estate market for the first time. The Oklahoma Teachers’ Retirement System is in the process of hiring its first real estate manager, and plans to invest 5% to 10% of its $8.7 billion in well-stabilized assets, or so-called core and core-plus real estate. This move comes even after the fund racked up a 24.5% return in calendar 2009 with 70% of its investments in stocks.

That’s not to say pension fund managers and their institutional peers are wearing rose-colored glasses, however. The survey reflects some uncertainty about the timing of a commercial real estate rebound. For example, 25% of respondents indicate that the outlook for real estate will get worse over the coming 12 months.

Still, investors are bullish on real estate in the long term. Survey respondents indicate that real estate will provide one of the greatest investment opportunities three to five years from now compared with other asset classes.

Another rising star among investors appears to be infrastructure, which includes public transportation and utility projects such as bridges, airports and power plants.

Public pension funds have been a leading advocate of infrastructure, with 18% currently investing in this niche and 20% in the planning stages.

“Perhaps this is a result of infrastructure’s real estate-like diversification, inflation-protection and income-producing characteristics, and the social and economic benefits that states and municipalities derive from investing in infrastructure,” says Whittemore.

The California Public Employees’ Retirement System (CalPERS) made a major foray into infrastructure investment when it recently purchased a 12.7% stake in London’s Gatwick Airport for $155 million.

The acquisition by CalPERS in June was the fund’s first direct investment as part of its infrastructure program, which was launched in 2007 with a goal of allocating 1.5% of its $200 billion in total assets under management.

“We are looking for opportunities to invest directly in high-quality infrastructure assets,” said George Diehr, the investment committee chair at CalPERS, in a statement.

Plowing money into U.S. infrastructure investments will continue to be a challenge, however. “Unfortunately, political will appears in especially short supply to tackle mounting problems as cash-strapped households and businesses could buckle under higher taxes,” noted a recent report from the Urban Land Institute.

Survey respondents named the Asia-Pacific region as the most attractive location for future infrastructure investments, given its economic growth potential and the need for infrastructure improvements.