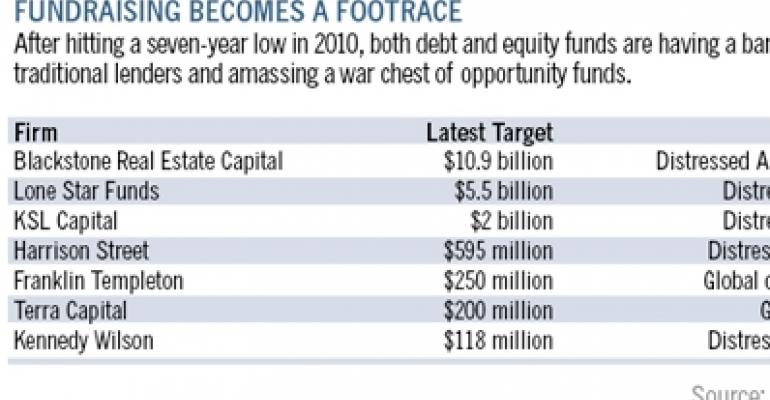 Over the past nine months, the newswires have been ablaze with announcements of heavy real estate fundraising from private opportunistic debt and equity investment funds.

First in the crosshairs of these fund managers are loans held on the books of weary lenders and their servicers seeking options to exit a two-year-long strategy of extend and pretend.

For instance, Lone Star Funds, an asset manager and high-yield investment fund based in Dallas, has just closed its second real estate debt fund this year alone, raising $5.5 billion in what seems like a marathon campaign.

The figure is well above the $5 billion cap the firm had initially imposed on that particular fundraising campaign. In just a few months, Lone Star expects to close its seventh distressed real estate debt fund since 2007, raising an additional $4.5 billion. These are stunning numbers for an industry still reeling from the worst three-year down cycle in recent memory.

Chicago-based Harrison Street Real Estate Capital, a high-yield investment and asset management firm, just closed its third equity fund by raising about $600 million for its latest effort, some $100 million more than its original target of $500 million.

Even on a smaller scale, fundraising is moving at a fast pace. Los Angeles-based Kennedy Wilson has now raised $118 million in equity for its most recent opportunistic real estate fund, Kennedy Wilson Real Estate Fund IV. The firm is well on its way to raise $300 million by mid- to late 2012.

Meanwhile, the Federal Reserve is reporting that banks are accelerating the credit thaw from their three-year lending hibernation. The return of gun-shy lenders has sparked more deal announcements in the last nine months than the previous two years.

The Fed’s second quarter survey of senior bank loan officers revealed that 27% of respondents reported higher loan demand from large companies, and at the same time demand from smaller firms rose by a respectable 10%. This is the second consecutive quarter of such gains, and the first time it has happened since the first half of 2006.

There also has been a pickup in lending by insurance companies. The life company lenders are still trying to keep pace with private investment funds, encouraged by the emerging revival of commercial mortgage-backed securities (CMBS).

These gains have been attributed almost entirely to life companies picking and choosing mostly large transactions for trophy assets in primary markets.

As major players like JP Morgan Chase and Wells Fargo go to market with new CMBS issues, the rating agencies are once again busy dissecting and analyzing transactions.

Even the somewhat tarnished Freddie Mac is getting in on the act by bringing its second CMBS deal to market in the past month, and the firm’s sixth such offering this year.

The footrace between high-yield investment funds and the flow from lending activities is giving rise to concerns about overheating in both the high-yield credit market and commercial real estate transactions in general. To be sure, these developments are playing out in the analyses of the rating agencies.

Standard & Poor’s is now raising red flags about underwriting even before CMBS makes a full comeback. The rating agency recently issued a report questioning what it identifies as increasingly aggressive property appraisals, pro forma underwriting, and “incentive management fees” to issuers that were at the center of the capital markets collapse in the first place.