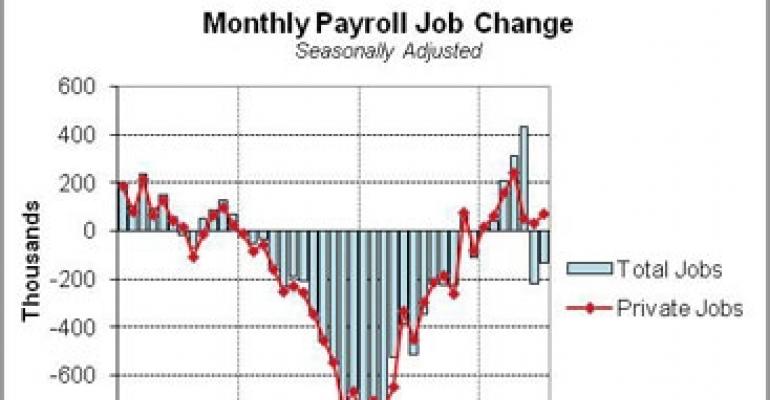 The disappointing July employment report released last Friday by the Bureau of Labor Statistics contains one number that is telling. The loss of 6,000 jobs in temporary help services from the prior month points to a lack of pent-up demand for full-time workers, says Robert Bach, chief economist for Chicago-based brokerage Grubb & Ellis. “For commercial real estate, it points to a slower leasing market and continued strength in investor demand for core assets.”

Indeed, low interest rates and mediocre returns for other asset classes have attracted investment capital to well-stabilized, high-quality commercial properties in the top markets. That in turn has driven down capitalization rates for properties fitting this profile and generated multiple bids, according to Bach.

Private sector employers added 71,000 workers to their payrolls in July, but a loss of 202,000 government jobs resulted in a total loss of 131,000 nonfarm payrolls. The national unemployment rate remained steady at 9.5%. Economists had expected the private sector to add 90,000 workers in July, and for the drop in nonfarm payrolls to be about 60,000. Thus, the report fell short of expectations.

The losses in government employment were comprised of 154,000 at the federal level, including the elimination of 143,000 temporary census jobs, 10,000 state government jobs, and 38,000 at the local level. Struggling with plunging tax receipts and restricted from running deficits, state and local governmental units laid off workers to balance their budgets.

Reasons for optimism
Commercial real estate economists see the glass as half full, not half empty, based on their analysis of the latest jobs data. “The continued modest gains in private sector hiring reinforce the idea that the worst is over for the commercial real estate industry,” says Hessam Nadji, managing director of research services for Marcus & Millichap Real Estate Investment Services based in Encino, Calif.

“While [economic] growth has been tepid thus far, and meaningful job gains have yet to materialize, vacancy rates for each property type will likely peak this year as we have been predicting since early 2009,” explains Nadji.

The apartment market, for example, has posted five consecutive quarters of positive absorption despite tepid employment growth. Nadji says that trend could signal that job gains will be revised upward next year.

Strength in import/export activity and the expansion of several discount and big-box retailers support some recovery signs in the retail and industrial sectors, adds Nadji. Both sectors recorded positive absorption in the second quarter of 2010, representing the first gain since late 2008.

Demand in the office sector will take longer to recover, however, as many companies maintain a conservative approach to expansion, explains Nadji. “Much of the deterioration has already taken place though, as the second quarter of 2010 represented the smallest decline in net absorption since the recession began.”

• The Job Openings and Labor Turnover Survey (JOLTS) conducted by the Bureau of Labor Statistics shows an increase of about 1 million job openings from July 2009 through May of this year.

• The non-manufacturing index from the Institute for Supply Management increased slightly in July to 54.3 from 53.8 in June. Index values above 50 indicate expansion.

The fact that the labor market continues to plod along shouldn’t be too surprising because the last two recessions were followed by extended jobless recoveries, explains Bach. “And the current recovery is not actually jobless. The labor market has added 654,000 payroll jobs this year, of which 630,000 are in the private sector. Inflation and interest rates are very low and likely to stay that way for an extended period.”

Analyzing corporate behavior
What puzzles many Americans is why Corporate America, after posting several quarters of healthy earnings, continues to hoard cash and hire so few workers. Non-financial companies are sitting on $1.8 trillion in cash, up about 25% from the start of the recession.

Victor Calanog, director of research for New York-based Reis, says the behavior of Corporate America on the hiring issue is no mystery. In fact, it’s Economics 101. “Businesses are gearing up for an eventual recovery. They are just investing in capital instead of labor, trying to do the same or more work without adding to their current roster of workers,” explains Calanog. “Investment in equipment and software grew by over 20% for two quarters in a row in 2010.”