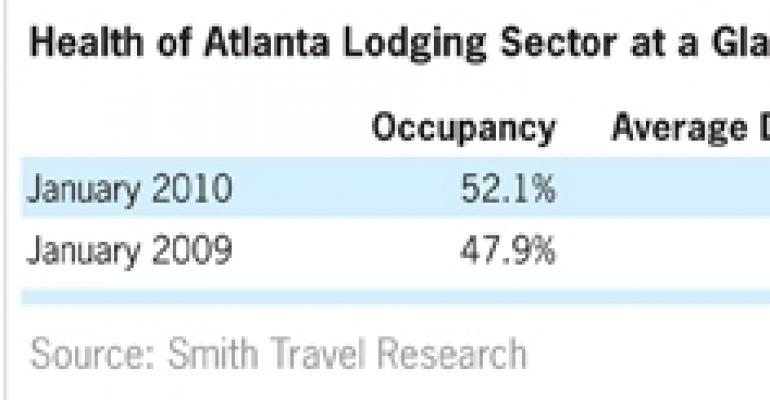 ATLANTA — The state of the hospitality industry in the Southeast goes under the microscope starting today as the 22nd annual Hunter Hotel Investment Conference kicks off at the Atlanta Marriott Marquis downtown.

While workouts, special servicing and distress assets have become household terms over the past year, the good news is that key metrics are beginning to improve. After suffering through a bruising economic downturn, the metro Atlanta hotel market — the sixth largest in the nation — is on the mend. The occupancy rate in January registered 52.1%, up from 47.9% in January 2009, according to Smith Travel Research.

What’s more, revenue per available room (RevPAR) rose 2.5% in January on a year-over-year basis in metro Atlanta. That’s a welcome turnaround for owners and operators who for much of last year appeared shell-shocked by the downward spiral of the hotel market.

But even so, Atlanta slightly outperformed its peer group. RevPAR in the top 25 U.S. lodging markets fell an average of 19% in 2009.

A wave of new supply has dampened hopes for a robust recovery in the Atlanta hotel market in the short run. Some 9,504 new rooms are in the pipeline, including 2,010 rooms under construction, 919 in final planning and 6,575 in earlier planning stages. The room pipeline represents about 10% of the current inventory of 94,260 rooms.

“The market has experienced significant room growth recently and certainly not at the best time for that to happen,” says Steven Nicholas, principal and executive vice president of Atlanta-based Noble Investment Group and conference panelist focusing on the art of hotel asset management.

Nicholas estimates that 5,000 rooms have been added to the Atlanta hotel market over the past two years, forcing hoteliers to be more flexible on pricing. In short, the added supply is fueling price discounting.

Noble Investment Group ranked No. 21 on NREI’s 2009 list of top hotel owners with 8,500 rooms in its portfolio. Last fall, the company completed the development of the Macon Marriott City Center Hotel in Macon, Ga., as part of a public-private partnership with the city.

The asset management panel, which meets from 1:45 p.m. to 2:45 p.m. Thursday afternoon, will pinpoint where the lodging sector currently stands in the real estate cycle, identify potential investment opportunities, and share what hotel companies are doing individually and collectively at their properties to weather the downturn.

“I think that we are at or close to the bottom of the cycle. The hotel industry is truly a cyclical industry and it’s been proven over and over again,” says Nicholas. “When the industry improves, it will improve quickly. Our job right now is that we do everything we can to mitigate the downside, but also more importantly be prepared to capitalize on the upside.”

In the case of Noble Investment Group that means pursuing new revenue streams. “At some of our hotels we’re taking on business we haven’t looked at before. More specifically, some of our corporate group hotels now have a number of government pieces of business because that’s not a segment some of our upper upscale hotels have used before.”

On the expense side, hoteliers today are trying to achieve cost savings at all levels without negatively affecting the guest experience, adds Nicholas.

The program kicks off this afternoon with a 40-minute presentation from Dr. Rajeev Dhawan, economist at Georgia State University. Dhawan will focus on the U.S. economy in 2010 and beyond and its impact on the lodging sector.

What’s the message he wants to hammer home to the audience? “A lot of the attendees are buying and selling hotels, and some of them will construct hotels. I think that they are a little puzzled at this point about why the lenders aren’t giving them the money. They need to understand why,” explains Dhawan.

“They hear the word toxic overhang of debt. That is what is going on. It went on in the late 1980s and early 1990s, too,” continues Dhawan. “It took awhile to clean it up. This time we’re just in the early stages of cleaning it up.”