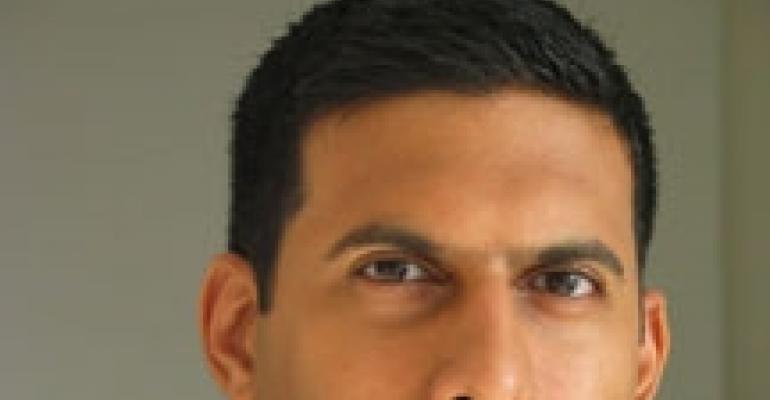 Market Watcher Says Credit Will Remain Tight for Next 12 Months

One of the leading authorities on real estate market economics says that lending institutions, burned by the recent turmoil in the financial markets, will maintain their tight lending standards for at least the next year.

Dr. Sam Chandan is chief economist and senior vice president of research at New York-based research firm Reis. He and his team are responsible for the firm's market forecasting, valuation, risk, and analytical product development as well as economic, regulatory, and capital markets research. They also oversee Reis's commercial mortgage-backed security (CMB) and real estate portfolio analytics services. Chandan holds a PhD in applied economics from the Wharton School of the University of Pennsylvania and is a doctoral scholar in the economics department at Princeton University.

We asked Chandan to give us his take on where all of the recent market movements may lead in the short and long term.

NREI: Give us your take on where the financial markets stand right now in terms of commercial real estate finance.

Chandan: Credit is continuing to tighten. Risk premiums remain elevated. Lending institutions are more focused on needing to stabilize their balance sheets, needing to recapitalize, than on taking new exposures in commercial real estate. That means for borrowers the cost of financing is higher and this is over and above the increases that we’ve seen already as a result of greater risk sensitivity on the part of the lending community.

NREI: Is it safe to say that the subprime residential contagion finally did spread to the commercial area?

Chandan: Absolutely. What you clearly see is the impact of residential foreclosures and distress on financial services companies and their willingness to extend credit has been infectious. It has spilled over into other areas of credit, not only commercial real estate but also corporate debt and other components of personal lending like credit cards.

Across the board borrowing is more expensive and this is in spite of the Fed’s fairly aggressive actions over the last year to cut rates. The risk-free rate in that sense may come down but the risk-free premiums have widened to an even greater degree.

We see this more for CMBS spreads than we do for more traditional lending. CMBS spreads are significantly higher than they were a year ago in a way that has made it difficult to think about the timeframe over which the next issue will come to market.

NREI: What is the short-term and long-term impact of the government rescue package on commercial real estate finance, and will it work?

Ultimately the impact for commercial real estate depends on one hand on the extent to which an increasing number of required refinancings in 2010 and 2011 are met by an appropriate credit extension by the market. If there is a relative balance between the availability of credit and the need for refinancing as those numbers climb, then refinancings will occur in a way that we could describe as orderly.

If not, if credit remains significantly constrained even out into that period and as a result we have either a significant increase in delinquency and default rates and a larger number of distressed asset sales, that will have a materially negative impact on the availability of credit for commercial real estate over a longer period.

Ultimately our view is that the market will stabilize with a set of healthy underwriting standards and a sustainable level of transaction activity. That doesn’t mean levels like what we saw in 2007.

NREI: Institutional investors are usually slow to enter down markets, but they have cash. What are they doing right now?

Chandan: Transaction activity has fallen on an annualized basis so far in 2008 by about 67% as compared to 2007. In part, that’s because there are a large number of investors who do have cash but it’s not unreasonable that some of them are concerned about the potential for asset prices to fall further, in part because the credit markets have shown, even in recent weeks, the potential to tighten further. Even with the ample supply of cash that some institutions and investors have at their disposal, inordinately tight credit markets will impact pricing and liquidity.

I don’t think there is a lot of confidence in the market that asset prices have stabilized, which is why transaction activity remains slow, even for the equity investors. They’re not in the position of having to rush. There’s no urgency so they’ll wait a little longer.

NREI: Is one wildcard the investment banks and what assets they put on the market?

Chandan: Absolutely. What comes to market is a significant factor because in as much as transaction activity remains low and demand at least for the time being remains muted, we don’t want too many assets to come to market. One of the things that has allowed for a relative degree of stability for commercial real estate is that there haven’t been a large number of people who have been forced to bring their assets to the market for sale because of a pending refinancing.

That’s not where we are right now and why we don’t observe a significant spike in delinquency and default rates. But if a situation arose where because of institutional distress and a large number of assets were to come to market suddenly in a particular place or at a particular time . . . when you have a lot of assets for sale the way the market comes back into balance is to draw down those prices. We do want to be careful and watch for that.

Without a very robust CMBS market, the debt to acquire large portfolios is harder to come by. So we shouldn’t expect to see very large portfolio sales in this environment.

Chandan: I think spreads are still too wide and there’s a lot of uncertainty there. There is some concern about the underlying risk associated with the investable assets. Not every CMBS deal is one that we need to be wary of, but people need to get comfortable again with their ability to clearly discriminate between varying levels of risk.

There is an increasing sensitivity to risk that’s driving up spreads generally, but for assets or investment opportunities where investors are concerned about their potential to discriminate different risk classes or different grades of risk they’re going to hesitate. There is still some work to do there.

There may be a perception that foreign capital plays a significant role in providing liquidity in a broad cross section of markets but that’s not the case. If we look at the markets where investors have been active, foreign investors are in a position to carefully scrutinize investment opportunities so there won’t be fervent sales activity because of this. While foreign investment is not being driven by day-to-day changes in exchange rates, general trends in exchange rates will affect the specific timing of acquisition activity.

The markets that are perceived to be and remain very liquid are the markets that will continue to attract investment. While oil has fallen from a historic high of $147 a barrel to something in the range of $90 to $95 a barrel, that’s still five times higher than earlier this decade when it was around $20 a barrel. So there are many funds that are cash rich because of sustained high levels of commodities pricing.

NREI: How will pricing be affected by the recent credit squeeze?

Chandan: There is the potential for the tightness in credit to undercut pricing for commercial real estate assets particularly in the case of a distressed asset sale. That presents — where those opportunities are evaluated carefully — the potential for a cash-rich investor to acquire a property in a way that if they have a long-time horizon will support meaningful returns.

Right now we do have a weakness in fundamentals, and people are going to say how long will they have to hold the asset to reach their target return and how can they reasonably expect the property to perform over the time period. In light of that expected property performance, what is appropriate pricing and that’s where we’re going to see some further downward pressure on prices.

Expectations for asset price appreciation are very modest at this point and investors are coming into the market largely with an expectation that they will have to hold their properties. They’re investing in an operating asset. It’s not like a couple of years ago where there were some investors who were purchasing properties with an expectation that they would then sell them within a year or two. People are expecting to hold these and so the operating capacity of the property becomes that much more important.

Institutional investors that have a demonstrated capacity and confidence in their ability to operate the assets well, either by themselves or in partnership with an operating company, are going to find that there are opportunities in the market right now.