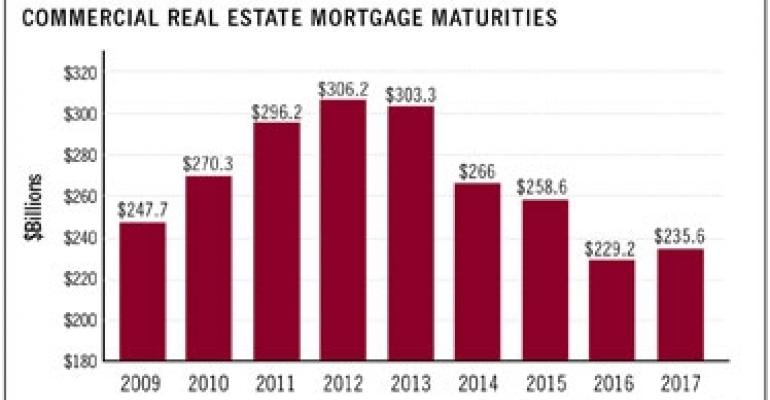 A potential recipe for disaster is brewing in the commercial real estate market, according to a newly released report from research firm Foresight Analytics. An extremely tight credit market coupled with $814 billion in maturing loans over the next three years could prove to be a toxic mix that delays recovery and puts pressure on valuations.

“We broadly see two scenarios,” says Matt Anderson, a partner with Oakland, Calif.-based research firm Foresight Analytics LLC. “The one that we’re currently most biased toward is to envision that there will be quite a bit of distress out there.” One impact of the distress would be the growth of defaults and foreclosures. The rising defaults, ironically, would remove some of the future pressure on maturities.

The second scenario is that lending capacity would be sufficient to avoid significant levels of distress, says Anderson. “If there is enough capacity out there to keep the existing inventory afloat for a while, the dollar amount of loans maturing will really soak up so much of the capacity of the market that there will be very little net new growth for the next decade.”

If this distress does not materialize or is more moderate, Foresight Analytics anticipates that the commercial real estate debt market will show minimal growth for the next decade.

Already, a wave of refinancing activity has begun to crowd out new loans. An estimated 80% of originations in 2008 were refinanced mortgages compared with approximately 35% from 2000 to 2007.

“We expect that proportion to be very high, approximately 80%, for several years to come where the market most likely will be treading water,” says Anderson. Each year through 2017, a high dollar value of maturing loans is anticipated (see chart).

This year, an estimated $250 billion in commercial loans is expected to mature, which if realized would be an all-time high for the market. With liquidity already scarce, many portfolio lenders have been kicking the can down the road with temporary one-year extensions on 2009 maturities.

While these short-term loan extensions are relieving some of the strain on the current debt market, they will add to the maturities that come back for refinancing in 2010. Anderson estimates that these one-year extensions represent more than a third — if not more — of the refinancing activity this year.

The pivotal year, however, will be 2011. “By our calculations for the 2006 and 2007 maturities, which really represent the boom years of commercial real estate investing and lending, 2011 is when we expect to see a sharp increase in the dollar amount of those loans that are maturing.”

“It’s concerning because it was the most aggressive lending [period], and there’s no CMBS lender to step in and replace those loans. Right now, there’s not much appetite among banks for these loans other than what they’re already exposed to,” says Anderson.

Not only does the lack of CMBS create a mortgage vacuum, but CMBS loans will also be adding to the total maturities. “Unless there’s a big shift and the CMBS engine gets revved up again, there’s definitely going to be a shortfall,” explains Anderson. “In the near term, the dollar amounts that we estimate maturing range from $45 billion to $55 billion per year from 2009 to 2011. For CMBS, it rises to $120 billion, and $140 billion in 2016 and 2017 because of the nature of 10-year loans in CMBS.”

Just how big the lending shortfall will be is tough to quantify. Although demand for refinancing existing loans has been defined, the supply side is a moving target. “In today’s environment, if the banks stop lending or stop growing, then we know we’re in some trouble there in terms of the shortfall,” says Anderson.

To avoid massive distress, he says, lenders will need to become more generous in terms of loan-to-value ratios or underwrite properties at higher valuations. “One or both of those would be the necessary elements of avoiding a lot of distress.”