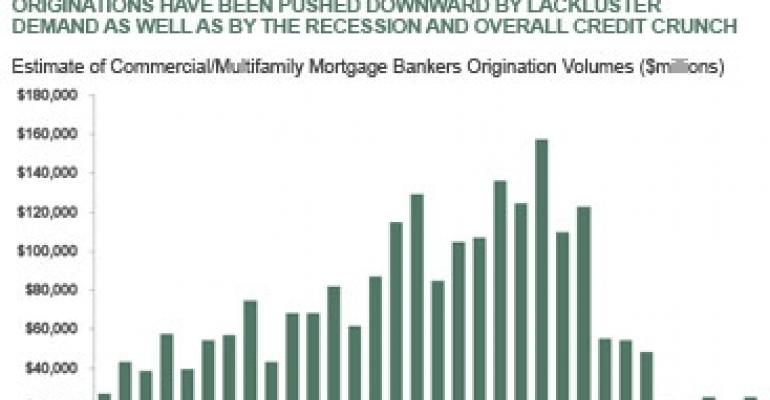 LAS VEGAS — Lenders are showing signs of coming out of hibernation with life insurance companies leading the way, according to new data released Tuesday by the Mortgage Bankers Association (MBA). Commercial and multifamily mortgage originations rose 12% in the fourth quarter compared with the same period a year earlier. Loan originations in the fourth quarter also were 15% higher than in the third quarter.

To be sure, commercial and multifamily mortgage originations remain at low levels in absolute terms, says Jamie Woodwell, vice president of commercial real estate research at the MBA based in Washington, D.C. The Commercial/Multifamily Mortgage Bankers Originations Index, for example, fell 79% over a two-year period ending in the third quarter of 2009.

The twin effects of recession and a lingering credit crunch have dealt a big blow to the commercial real estate market, the repercussions of which are likely to be felt for years to come, say industry experts.

But the uptick in originations is a sign of stabilization, Woodwell said during a press conference Tuesday at the Mandalay Bay Conference Center. “It is reinforcing the idea that there are lenders out there with capacity and looking to make loans, and they’re finding some deals.”

The press conference focused on the state of the commercial and multifamily real estate financing industry. “CREF 10” has attracted 2,000 industry professionals, up from approximately 1,700 last year, according to an MBA spokesperson.

Jumping back into the fray

Not surprisingly, originations by conduit lenders fell 82% on a year-over-year basis in the fourth quarter. The commercial mortgage-backed securities (CMBS) market has virtually ground to a halt since the second half of 2007.

The increase in loan originations occurred across all property types, except for multifamily. Loan originations in the apartment sector actually fell 8% during the fourth quarter compared with the same period a year earlier. Why?

The government-sponsored enterprises (GSEs) Fannie Mae and Freddie Mac — which continued to lend during the downturn and now account for more than 80% of the multifamily finance industry — have become more selective, explains Woodwell. There also has been a pullback in borrower demand.

The MBA also unveiled its legislative and regulatory priorities at the press conference. In an effort to boost liquidity during the disruption in the capital markets, MBA President and CEO John Courson says the association advocates the following:

Extension of the Term Asset-Backed Loan Facility (TALF) program through Dec. 31, 2011 — TALF has played an important role in jump-starting the CMBS market, according to MBA, by providing an active market for the purchase of super-senior tranches of CMBS.

Expansion of the FDIC Legacy Loan Program — The Federal Deposit Insurance Corp. plans to expand the program to include loans from performing banks. This program is expected to increase bank commercial real estate lending activity because banks will have the ability to sell existing loans, which in turn will provide the capacity to make new loans.

Increase funding for rental assistance — If rent subsidies are made available to tenants or to a new owner for assistance in preserving the property as affordable housing, points out Courson, many distressed properties could be saved.