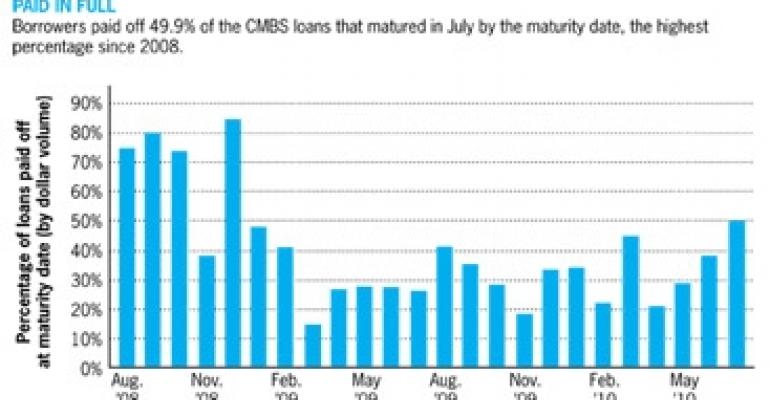 Some 49.9% of the securitized loans that matured in July successfully met their balloon payments, according to New York-based Trepp LLC, which closely tracks the commercial mortgage-backed securities (CMBS) market. That’s up more than 11 percentage points from 38.7% the previous month and is the highest level since the end of 2008.

“This shows there is more money out there than people have thought,” says John B. Levy, principal of real estate investment banking firm John B. Levy & Co. “Institutions, life companies and pension funds have money and they’re looking to make transactions.”

Variety of lenders
Trepp doesn’t specify how borrowers are coming up with the necessary capital to pay off their loans, but industry experts speculate that a combination of low borrowing costs and increasing liquidity from a range of sources outside the CMBS market are behind the recent improvement in payoffs. With very little new CMBS originations, it’s clear that most payoffs on securitized loans are funded with new whole loans or equity rather than securitized debt.

Borrowers with trophy assets have been able to obtain new financing from foreign wealth funds, insurers, and even a smattering of CMBS transactions this year. Private equity investors, too, are ready to help some borrowers put together the funds necessary to close out old CMBS loans, Levy says.

Equally important are low interest rates, which are enabling borrowers to meet the debt service on large loans. The 10-year Treasury rate, a benchmark for long-term lending, fell to a 17-month low of 2.58% on Monday before edging upward to 2.64% Tuesday. Fixed-rate commercial real estate loans are available for 5.5% today, compared with about 7% a few months ago, according to Levy.

“We’re seeing rates that many of us have just never seen before, and it allows people to make transactions and to carry debt that they never thought they could afford,” says Levy. “Something that might not have worked at 7%, may work at 5.5%.”

Levy says some CMBS loan holders are better able to meet their loan commitments today than they were in the depths of the commercial real estate downturn. “My guess is that some of the pressure may have been lifted from other deals that they were in and they can now free up some capital,” Levy says.

Historical context
Until the fourth quarter of 2008, when financial markets experienced a meltdown following the bankruptcy of Lehman Brothers, the monthly average for the number of on-time, paid balloon payments was more than 70%, according to Trepp.

Since the beginning of 2009, there hasn’t been a month when even half of the borrowers with CMBS loans reaching maturity were able to make their balloon payments. The average percentage for the past 12 months has been 32.2%.

While July’s surge in on-time balloon payments is encouraging, Trepp researchers are waiting for more data before deciding whether the improvement is a turnaround or an anomaly.

“We’d like to see this number at 50% or 60% for three to four months before we call it a trend, but we’re hopeful,” says Manus Clancy, senior managing director at Trepp. “Things are slowly starting to unwind and you’re seeing some deals get done and some refinancing take place.”

Decreasing asset values across property types since the market peak in late 2007 have made deleveraging a necessity for most owners attempting to replace mature CMBS loans. Even for owners with the equity to finance with a smaller loan, however, finding a lender is more challenging today than it was three years ago.

Earlier in this decade, most CMBS borrowers would expect to replace one securitized loan with another upon maturity. That funding source all but dried up in 2009, a year without a single CMBS transaction, says Clancy.

Securitization revival
CMBS lending has made a small comeback this year with deals that include a $716.3 million issue by JP Morgan Chase Commercial Mortgage Securities Corp. and a $788.5 million issue by Goldman Sachs and Citigroup. “In 2010, we could see up to 10 conduit deals,” Clancy says. “That would be great progress.”

The loan-to-value ratios on CMBS deals range between 60% and 75%. The financing terms often prohibit subordinated debt on the asset, such as mezzanine loans. Underwriting is based on current rent and signed leases, as opposed to the underwriting practices of 2006 and 2007 that often incorporated future rent increases and leasing projections.

July’s spike in balloon payment payoffs reflects a slight easing in the stringent underwriting standards that lenders enacted during the financial crisis, experts say. The recent change brings the market closer to historical leverage ratios, Levy says, and is a far cry from the days when the combined debt on a property could easily exceed 95% or more of its value. “Seventy five percent has been the standard for 50 years,” he says.

Clancy says that an increasing number of securitized lenders are agreeing to loan-to-values between 70% and 75% today as opposed to 60% a year ago, but he believes today’s underwriting remains sound. “It’s lock-solid stuff, which is what investors are demanding in this environment.”

Haves and have-nots
Unfortunately for most of the $227.3 billion in CMBS loans slated to come due through 2014, securitized debt lenders are focused on top-quality commercial real estate. That means owners of less-desirable properties will get little or no help from the CMBS market as they seek funding to pay off their loans.

“It tends to be trophy properties in premiere metropolitan areas right now that are managing to refinance,” Clancy says. “Secondary and tertiary markets, B-level properties, C-level properties — those types of things are still struggling as they have for the last two years to find money to refinance their loans.”

Seeing nearly half of maturing conduit loans in July being paid off on time is a positive sign for the CMBS market, Clancy says. But when it comes to addressing the loan maturity problem, what Clancy would like to see is a CMBS transaction backed by Class B and Class C properties outside of the primary markets.

Establishing pricing for a pool of loans off the beaten path would set pricing for similar deals and help to re-establish conduit lending for the broader market. “If somebody could get a deal done like that,” Clancy says, “it would open the floodgates for more and more deals to be done through securitization.”