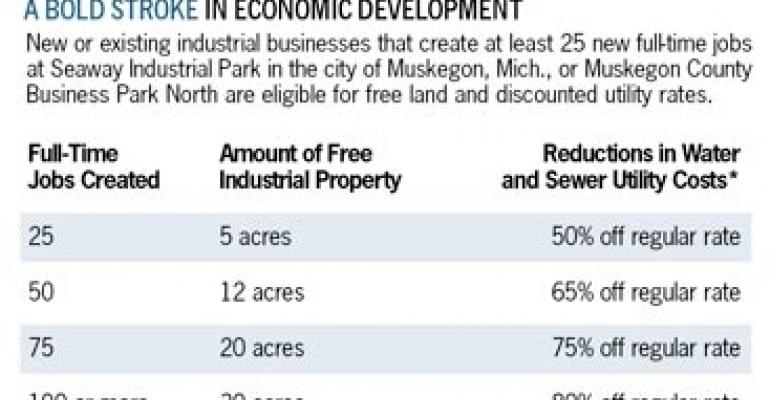 Extraordinary times call for extraordinary measures in Muskegon County, Mich., where the unemployment rate rose from 13.9% in June to 14.9% in July. In a bold move to stimulate hiring, the city of Muskegon, the county and Dalton Township have joined forces to offer free land to companies that can guarantee 25 or more full-time jobs at one of two industrial parks.

Qualifying companies that accept the offer also will receive reduced water and sewer utility rates for at least three years, plus huge tax breaks. Government officials rolled out the program, known as Muskegon 25, late this summer.

The available parcels at Seaway Industrial Business Park in the city and Muskegon Business Park North in Dalton Township are “shovel-ready sites,” says Ed Garner, president and CEO of Muskegon Area First, a private, non-profit corporation whose mission is to attract and retain businesses.

“The due diligence has been already done to qualify these sites environmentally, explains Garner, adding that the necessary zoning approvals are in place. “These sites are ready to go, which tends to be important to developers.” The asking price of land averages $17,500 per acre in Muskegon Business Park North and $30,000 per acre in Seaway Industrial Park.

That’s certainly an enticing offer. “We think it’s going to work. We’ve definitely got some calls about it,” says Mike Franzak, zoning administrator for the city of Muskegon, population 40,000. “We also want to show people this is a great place to live.” The downtown area is located on the shores of Lake Muskegon, an inland lake connected to Lake Michigan. “We have a great quality of life here in terms of the recreation — the golf, beaches, marinas and bike trails,” says Franzak.

But wait, there’s more
Both industrial parks are in Michigan Renaissance Zones, which are virtually free of all state and local taxes for businesses located within their boundaries. That program ends in 2014, with a gradual phase-out period beginning in 2012.

Businesses that locate in either of the parks will pay no real estate property taxes or personal property taxes until 2012, when they will be required to pay 25% of the taxes, followed by 50% in 2013, 75% in 2014, and the full amount thereafter. It is possible to get at 15-year extension for “catalyst” projects.

About 18% of the county’s workforce is employed in the manufacturing sector, says Garner. The silver lining in a high jobless rate is that skilled workers can be hired quickly. “We feel that we have a good training system with our colleges to get people ready.”

Overcoming the union stigma
One misperception that some employers have of West Michigan is that the local workforce is heavily unionized, says Garner. Unions are a much bigger factor in Southeast Michigan, where Ford Motor Co., General Motors Co., and Chrysler Group LLC are all based, he emphasizes. “I would dare say that of the companies that are unionized here, it’s not an adversarial relationship with the union. It’s more of a cooperative nature.”

Muskegon 25 is a win-win for companies and skilled workers, says Franzak, who doesn’t mince words. “We have people hungry for a job, and we feel we are a very business-friendly community.”