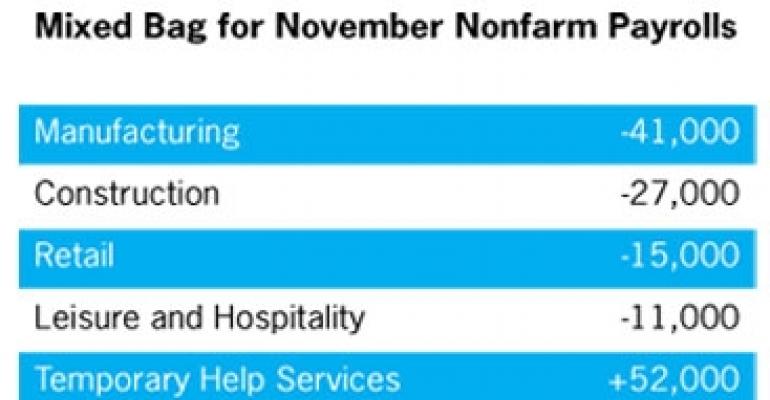 A much better than expected jobs report for November raises the possibility that employers could begin adding jobs sooner than expected, according to Bob Bach, chief economist for brokerage firm Grubb & Ellis. The news provides some much-needed holiday cheer to the battered commercial real estate industry.

Nonfarm payroll employment fell by 11,000 in November compared with an expected loss of 125,000, the U.S. Labor Department reported today, causing some economists to call the report a game changer. Meanwhile, the unemployment rate dropped from 10.2% to 10%. Equally important, revisions to the September and October jobs data show that U.S. employers shed 159,000 fewer jobs than first reported.

The brightening jobs picture initially generated plenty of enthusiasm on Wall Street, with the Dow Jones Industrial Average soaring by 150 points in early trading before pulling back to near even by mid-afternoon.

For the commercial real estate industry, whose fortunes are inextricably linked to the health of the labor market, Bach says that a near-term resumption of employment growth “would lend support to net operating incomes and property values, helping to cushion the distress that continues to mount for the lack of debt capital available to renew maturing loans.”

Resumption of job growth also would have positive implications for consumer confidence and spending, adds Bach. The negative implications quite possibly could be higher inflation and rising interest rates.

Bach is quick to temper his enthusiasm. “The November jobs report could be an outlier with more losses to follow in the coming months, but it is one more piece of evidence that the economy is on the right track, which is really good news.” The economy has shed approximately 7.1 million jobs since December 2007.

“Although overall trajectories strongly show that the labor markets are in a better place today relative to the end of last year or the beginning of 2009, today’s numbers from the Bureau of Labor Statistics are a surprise for most folks, perhaps even the BLS,” says Calanog.

Revisions as the cusp of economic downturns or recoveries are notoriously variable, he points out. For example, in January 20008, the BLS reported job losses of 17,000, but later revised the total number of job losses to 72,000.

Similar revisions occurred in February 2008, when job losses were initially reported to be 63,000, but the figures were later revised to show total job losses of 144,000.

“We have yet to see job gains in construction, manufacturing and information, and other categories remain flat,” Calanog emphasizes. “There were some gains for professional services, but mostly for temporary positions. However, if we see an uptick in these categories over the next few months, this may herald a quicker return to demand for commercial real estate space — although not as quick as others might hope.”

The coming year will most likely remain a challenging year for owners of office, industrial and retail properties, concludes Calanog, “but a massive unexpected rebound in job growth may mean a resumption in rent growth by 2011, not 2012.”

Light at the end of the tunnel

Given that there is typically a six- to nine-month lag between an improving U.S. economy and space demand, property fundamentals will bottom out by mid-2010, predicts Hessam Nadji, managing director of research services for Marcus & Millichap Real Estate Investment Services.

“This is what we have been projecting since the start of 2009. Apartments and industrial will be the first to show improvement,” adds Nadji.

Nadji says two data points are still of concern to him. The first is the small uptick in the average workweek, given that the U.S. economy only lost 11,000 jobs in November. The average workweek for production and nonsupervisory workers on private nonfarm payrolls rose to 33.2 hours, up from 33 hours the prior month. The manufacturing workweek increased from 40.1 to 40.4 hours month over month.

The second point of concern, says Nadji, is that the private ADP jobs report indicated a loss of 169,000 private sector jobs in November, which was actually worse than the 150,000 that analysts had estimated.

“These two data points indicate that the path to seeing employment gains turn positive in a sustainable fashion will be choppy,” emphasizes Nadji. “We may be in for a jobless recovery for awhile, but with productivity growth maxing out given the extreme levels of job cuts, we should be close to getting to at least neutral on jobs numbers.”

Unemployment will continue to rise as discouraged workers come back into the labor force and begin looking for jobs, forecasts Nadji. “This is a normal part of a recovery cycle.”