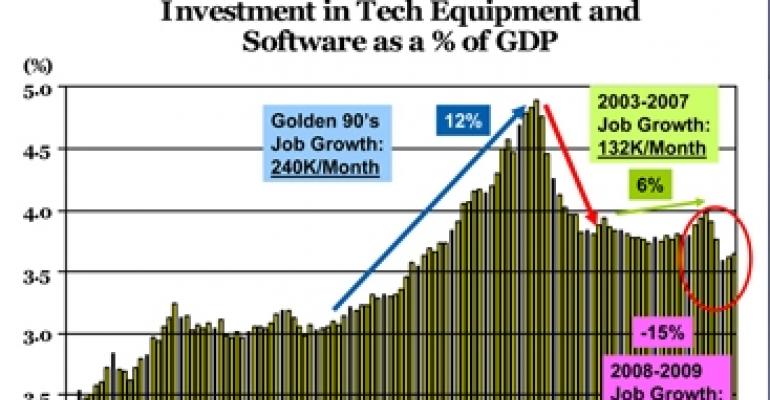 Until business investment accelerates, any recovery in the U.S. labor market will be muted, says Georgia State University economist Dr. Rajeev Dhawan, who adds that he doesn’t expect job growth “in any decent form” until the fourth quarter of 2010.

“I don’t care what your feelings are, what your confidence level is. I need the investment to happen. I need the banking system to be functioning reasonably to make new loans,” said Dhawan during a speech to a group of more than 250 real estate professionals recently on the 35th floor of the 1075 Peachtree St. office tower in Midtown Atlanta.

Dhawan forecasts non-farm payrolls to decline an average of 65,000 a month in the first quarter of this year, and fall an average of 20,000 monthly in the second quarter before heading into positive territory. By the fourth quarter of 2010, Dhawan expects modest monthly job gains of 60,000.

The economy needs to generate more than 200,000 jobs a month to make a dent in the national jobless rate of 10%, according to most industry experts.

The positive correlation between business investment and jobs is compelling, says Dhawan. During the go-go days of the 1990s, when the U.S. economy was adding an average of 240,000 jobs per month, business investment in technology equipment and software as a percentage of gross domestic product (GDP) rose 12% (see chart).

“As long as this [business investment] doesn’t come back, I can’t give you the job growth numbers,” emphasizes Dhawan. “My hands are tied because when businesses expand, they expand not just by building buildings. They have to buy equipment and software, then they hire people to work with those computers. It’s not going to happen the other way around. There is no miracle.”

Consumers remain in a tight-fisted mood, emphasizes Dhawan. While the stock market has rebounded about 60% from its March 2009 lows, the same can’t be said of the depressed housing market. Add to the mix stagnant or falling incomes, and it’s no surprise that Americans are hesitant to spend.

“It took 15 years for the savings rate to plummet. It took only six months to recover half that drop,” says Dhawan. The now expired cash for clunkers program is a good illustration of Americans’ financial behavior. “When we got the good car deals, we dropped the savings and went out and bought the cars,” explains Dhawan. “Once that was over, consumers went back to saving.”

Banks are hoarding cash for different reasons, explains Dhawan. The unhealthy banks recognize that if they dispose of the toxic assets on their books, they will become officially insolvent and forced to close. As they work to shore up their capital position, many of these smaller banks are not making any new loans.

The healthy banks are waiting for the bad banks to fail. They are keenly aware that the Federal Deposit Insurance Corp. (FDIC) has been sweetening the pot to entice buyers to take on the assets of failed banks.

Under a so-called “loss-share” agreement, the FDIC often agrees to assume up to 80% of losses when buyers take on a failed bank's assets. But at this point, the FDIC has neither the money nor the manpower to close down the insolvent banks en masse, says Dhawan.

While the healthy banks are waiting for the feast to begin, they are building up their cash reserves. Indeed, the excess reserves of depository institutions have grown to more than $1 trillion compared with less than $100 billion in 2008.

“What is the casualty? No new lending,” says Dhawan, which poses a real hardship for small businesses in particular.

Despite all the obstacles the FDIC is facing, Dhawan is hopeful many of the smaller banks that are insolvent will be closed as new solutions to the crisis emerge. Such a move is a precursor to business investment and job recovery, he believes. The FDIC seized 140 banks in 2009.