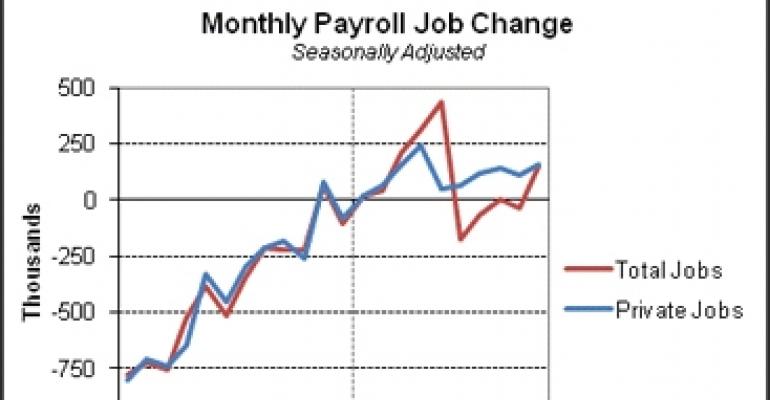 “But along with other indicators such as the ISM manufacturing and non-manufacturing indices, factory orders, vehicle sales and consumer spending, it suggests the economy is slowly gathering momentum,” he emphasizes.

What’s more, in October the seasonally adjusted annual rate for new vehicle retail sales, which is what sales would be if the rate remained constant for a year, increased to about 10.2 million, the highest mark for the year, according to the Detroit Free Press

But the better-than-expected job growth figures in October (forecasters had expected a gain of about 60,000 jobs) failed to make a dent in the national unemployment rate, which remained unchanged at 9.6%, according to a separate survey of households.

Because the household survey does a better job than the nonfarm payroll survey of tracking changes in employment at small businesses and among the self-employed, the lack of change in the unemployment rate in October is “a sign that small businesses remain stressed,” says Bach.

Among some of the highlights in the latest jobs report:

• The private sector added 159,000 jobs, while the government subtracted 8,000 jobs, primarily at the local level.

• The August and September nonfarm payroll numbers were revised higher by a combined 110,000.

• Since employment bottomed last December, the labor market has expanded by 874,000. “This is just 10% of the jobs lost in 2008 and 2009, and the rate of improvement has been disappointing, but the trend is up,” says Bach.

• Average monthly job growth in the private sector this year was 79,000 in the first quarter, 118,000 in the second quarter and 122,000 in the third quarter. October’s 159,000 spike in private-sector jobs provides a running start for the fourth quarter, Bach believes.

• The growth in nonfarm payroll jobs in October was led by education and health services with a gain of 53,000. Meanwhile, professional and business services jobs rose 46,000 (including 34,900 temporary jobs) and retail employment rose 27,900. Manufacturers laid off 7,000 workers.

For a more detailed analysis of the government’s monthly jobs report, click here.