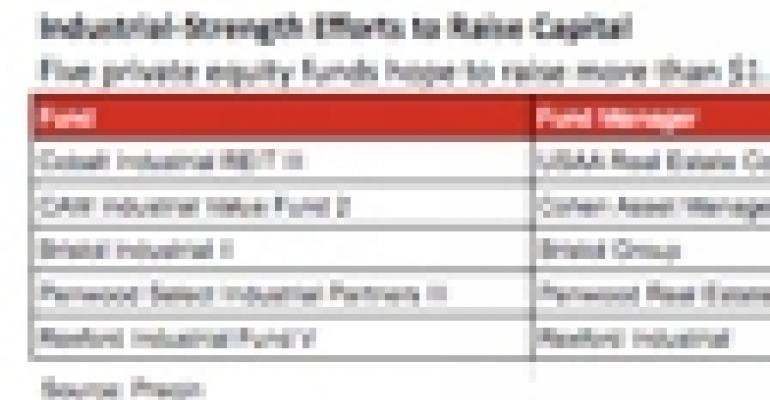 Industrial real estate is becoming a new focus for private equity funds this year as they seek to raise $1.8 billion for the sector — the most since 2006. More than 70% of that capital, or $1.3 billion, is targeting industrial warehouses in the United States, according to a new report from research firm Preqin, which tracks private equity fundraising activity (see table).

Preqin research analyst Farhaz Miah notes that only two of the eight private equity funds raising capital this year are targeting mainly European markets, while one fund is targeting Asia and collectively the “rest of the world.”

So why is industrial a favored investment class? It has much to do with the recovery in world trade.

“Both international and domestic demand for warehouse and distribution facilities are increasing, the former because of the recovery in international trade that commenced quickly after the [financial] collapse of 2009,” says Victor Calanog, director of research with New York-based researcher Reis.

Calanog notes that a rise in online sales by retailers, including Amazon.com, also has led to increased demand for U.S. warehouse space. The veteran economist is quick to note one caveat regarding geography, however.

“Clearly, the private equity players believe they can cherry pick the better properties that face more sanguine prospects down the road, despite the tepid economic recovery. But they need to be very careful in assessing various markets and what could be called the ‘shadow inventory’ of fallow industrial space,” says Calanog,

According to Preqin, private equity fundraising for industrial property worldwide has been on a roller-coaster ride since the mid-2000s. In 2006, the sector raised $800 million before volume spiked to $1.6 billion in 2007, and fundraising fell to $700 million in 2008.

Between 2005 and August 2011, 34 funds that focused exclusively on the industrial sector raised $9.3 billion in aggregate commitments from investors, says Miah.

However, in 2008, there was a significant decline in both the amount of capital raised and the number of funds reaching a final close in comparison to previous years, as only three industrial funds closed, raising an aggregate $700 million in commitments. This demonstrated the adverse impact that the financial crisis had on the fundraising environment.

For now, many market analysts believe the prospects for industrial remain bright. Class-A logistics space will remain in strong demand in the future, as its primary driver, international trade, continues to grow at a multiple of the overall economy, according to new research from brokerage firm Grubb & Ellis.

Strong demand and minimal new construction have already lowered the national vacancy rate to 12.5%, but investors should be wary of overbuilding in the segment.

One of the nation’s largest industrial markets, metro Los Angeles, is seeing a broad-based recovery, according to global real estate services giant Jones Lang LaSalle. Fueled by growth in the eastern part of the Inland Empire, the Los Angeles market recorded 8.6 million sq. ft. in absorption in the second quarter of 2011, the most since 2006.

In terms of transactions, sales of industrial properties and portfolios year-to-date through July 2011 are up 46% over the same period a year ago, according to New York-based Real Capital Analytics (RCA).
Sellers continued to bring industrial property to the market in July, adding $3.8 billion in new offerings, the highest monthly total this year, reports RCA, suggesting that demand for industrial purchases remains strong.