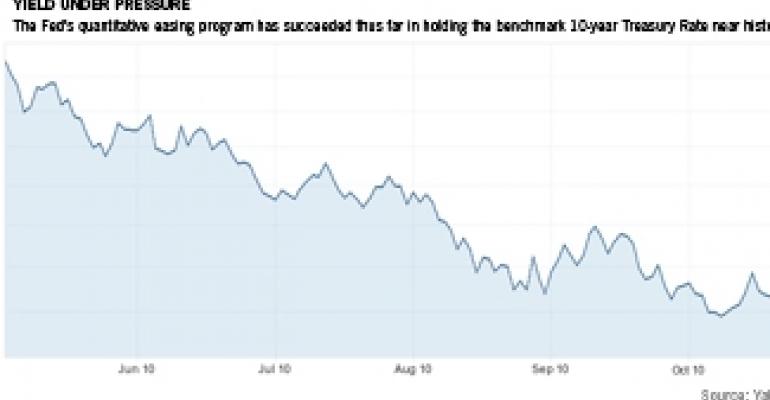 Quantitative Easing: Are the Consequences Worth the Benefits?

The next round in the Federal Reserve Bank’s risky plan to stimulate growth by suppressing long-term interest rates — Quantitative Easing 2 — will strengthen the bottom line for many commercial real estate investors, experts say. But inflationary side effects may do more harm than good to the U.S. economy, and the plan is unlikely to generate the job growth landlords need to drive absorption.

“We’re trying to cure the problem with the hair of the dog that bit us,” observes Robert Bach, chief economist at real estate services provider Grubb & Ellis. In this case, the dog in question was excess money and credit, which fueled overspending by consumers and investors alike.

As the Fed buys Treasury bonds with newly printed money in the coming months, it will add hundreds of billions in additional dollars to the monetary system. “The Fed is trying to flood the economy with even more liquidity,” says Bach. “The fear is that all of this money sloshing around the financial system has nowhere to go, no way to express itself, except in terms of higher inflation.”

Why is the Fed pushing more liquidity at a market that has shown weak demand for credit? In short, because that’s all it can do.

The overnight Fed funds rate — the interest rate that the Fed lowers directly when it wants to encourage lending and commerce — is already below 0.25% and has been at that level for roughly two years now. The only means still available to reduce long-term interest rates is quantitative easing.

Quantitative easing or QE2 refers to manipulating the supply and demand factors that investors use to determine the yield on U.S. Treasury bonds, which provide critical yield benchmarks for long-term lending. If the Fed can buy up enough Treasuries, then investor demand for the few bonds still available for purchase will keep the yields in check.

Since early 2009, the Fed has purchased some $1.25 trillion in mortgage securities, $175 billion in Fannie Mae and Freddie Mac mortgage debt, and $300 billion in U.S. Treasury bonds in an effort to boost liquidity and stimulate the economy with price stability. By rolling over those investments into Treasuries, the Fed will keep the supply of available bonds in check and thereby keep interest rates near their historic lows.

The strategy has helped to keep the 10-year Treasury rate near historic lows. The yield reached a 22-month low of 2.41% in early October and closed Tuesday at 2.59%. While the Fed hasn’t specified how much it will spend on Treasuries in its next round of purchases, observers say that volume will have to be several hundred billion dollars in order to have a significant impact on pricing. The Fed was expected to announce a round of purchasing at its policy meeting today.

The Fed’s actions are unlikely to speed the economy’s slow annual expansion rate of between 1.5% and 2% per year, according to Ben Breslau, head of Americas research at commercial real estate services provider Jones Lang LaSalle. The goal is to keep interest rates down until private sector growth kicks in, bringing the job growth the Fed is ultimately seeking.

For now at least, there is little danger of runaway inflation because credit is hard to come by, despite low interest rates giving the appearance of easy money. Lenders have no appetite for risk, loan to value ratios top out at 65% to 70% and assets have lost much of their pre-recession values, which limits available loan proceeds. “True monetary conditions are actually still very tight,” says Breslau, “way too tight to drive robust growth or create any sustained inflation.”

Commercial real estate investors stand to benefit in both the short and long terms from the Fed’s policy, according to Gary Mozer, chief executive officer at real estate investment banking firm George Smith Partners. “In the short term, we get great interest rates,” says Mozer, who is also a principal and managing director at the Los Angeles-based firm.

And in the long term, if and when QE2 triggers a bout of inflation, commercial property owners will be able to ride a wave of rent increases while debt costs remain fixed at low, long-term rates. “Real estate guys like inflation because we have a hard asset with variable rents,” Mozer says, “so as inflation hits, we can charge more.”

Not all property sectors will benefit equally under QE2, however. Retail sales growth depends on consumer spending, for example, and that is linked directly to employment growth and consumer confidence in the job market, says Rich Walter, president of Irvine, Calif.-based Faris Lee Investments. He suggests federal efforts could be more productively directed at easing taxes and other measures to promote hiring.

“If this is going to exacerbate future inflation, that could be an issue," says Walter. “Inflation will potentially help rents and property values, but ultimately the tenants have to survive. You don’t get any lift in your rent if they can’t afford to pay it.”

Walter doesn’t believe QE2 will help the large numbers of retail real estate investors who are struggling with vacancy issues and can’t qualify for financing. For those owners, relief will have to come from job growth and increased consumer spending that will eventually boost retail fundamentals. “It’s not a bad thing,” Walter says of QE2. “It’s just not going to solve the bigger problem and help the mass of real estate out there that is not qualifying for this debt.”

Ed Padilla, CEO of Minneapolis-based financial intermediary NorthMarq Capital, suggests commercial real estate investors should take advantage of the good that comes from QE2 while preparing for the inevitable inflation it will bring. Lock in as much low-interest, long-term, fixed-rate debt as possible before an end to the Fed’s bond-buying program frees long-term interest rates to go back up.

“When you increase the money supply by half a trillion dollars or whatever this will be, that can only lead to inflation,” says Padilla. “It might be a year out, but inflation is out there and inflation will go up. You’ll look smart a year from now if you’ve borrowed 10-year, fixed-rate financing at current levels.”