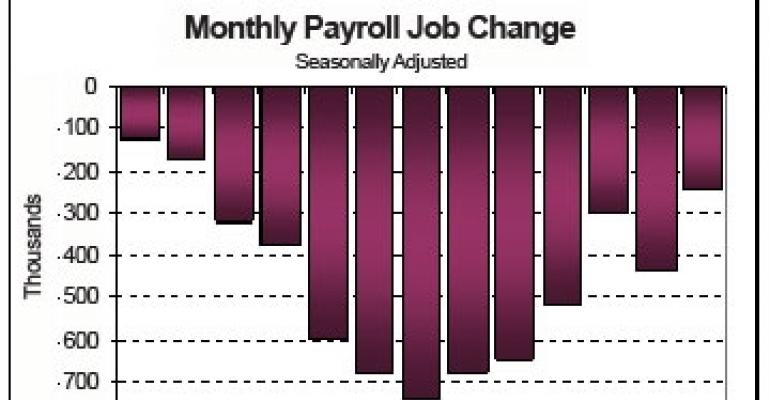 Recession Is Easing, But Not Commercial Real Estate’s Woes

Despite strong evidence that the severe U.S. recession is receding, the problems in commercial real estate continue to mount. Real gross domestic product (GDP) contracted at an annualized rate of 1% in the second quarter, much improved over the 6.4% pullback in the first quarter. But continued job losses coupled with a pullback in consumer and business spending have led to considerably weakened property fundamentals.

The U.S. apartment sector, for instance, long hailed as one of the most stable sectors in commercial real estate in good times and bad, experienced record deterioration in the second quarter. Fewer than 900 apartment units were absorbed during that span, according to New York-based real estate research firm Reis, less than one-tenth of what the market absorbed in the second quarter of 2008.

Vacancies climbed to 7.6% in the second quarter, up from 7.3% in the first quarter, while effective rents fell by 0.9% during the same period.

“With the slowdown in household formation inextricably linked to job markets that have yet to post gains, apartment properties registered the weakest second-quarter figures for net absorption since Reis began publishing quarterly performance data in 1999,” according to Victor Calanog, chief economist for Reis. His comments came during a second-quarter briefing with reporters today.

Inside the employment numbers

Non-farm payrolls dropped by an estimated 247,000 in July, according to the Bureau of Labor Statistics, the lowest level since August 2008 before the collapse of Lehman Brothers. By historical standards, that’s still a significant number of job losses.

“Job losses exact a toll on the social fabric of the country, and they have a big impact on consumer spending, which accounts for around 70% of the economy. Moreover, they directly impact leasing market conditions for commercial property,” stated Bob Bach, chief economist for Grubb & Ellis, following the release of the employment summary last Friday.

Job losses are never good news for commercial real estate, added Bach. “But [Friday’s] report showing diminishing losses and other encouraging details is consistent with a late-stage recession/early-stage recovery. The pain is easing.”

While the U.S. unemployment rate unexpectedly dropped from 9.5% in June to 9.4% in July, many Americans who have lost their jobs are struggling to find work, according to Sam Chandan, president and chief economist for New York-based Real Estate Econometrics.

The average duration of unemployment rose from 24.5 weeks in June to 25.1 weeks in July, according to the Bureau of Labor Statistics. “A year ago, the average duration of unemployment was 17.3 weeks,” said Chandan. “The share of the unemployed who have been out of work for six months or more increased to 33.8% in July, up from 29% in June and 19.3% a year ago.”

What’s more, the number of long-term unemployed — those jobless for 27 weeks or more — rose by 584,000 during July to 5 million, according to the Bureau of Labor Statistics.

Gazing into its crystal ball

“More than two-thirds of new apartment buildings opened their doors in the first half of 2009 fifty percent vacant or higher,” said Calanog. Effective rents nationally are projected to fall by 2.6% by the end of 2009 and not begin to see positive growth until 2011 when they are projected to rise a tepid 1.3%.

The outlook for the nation’s office market isn’t any rosier in the near term. The national office vacancy rate is forecast to hit 16.9% by year’s end, according to Reis, before peaking at 17.9% in 2010. Meanwhile, office effective rents nationally on average are projected to decline 8.6% by the end of 2009, and continue falling, albeit at a slower pace, until 2012 when they will see modest growth of 1%.

The U.S. industrial vacancy rate should begin to tighten in 2011, assuming that an economic recovery begins in early 2010 and global demand picks up. In the meantime, negative net absorption is projected to peak at 65.8 million sq. ft. by the end of 2009, while the national vacancy rate is expected to reach 11.4%, up from 10.2% in 2008. Nationally, effective rents are projected to contract by 3.7% on average during the same period.

While second-quarter numbers were dismal, they were expected, Calanog maintains. On the flip side, no good news has yet to unexpectedly emerge to give the commercial real estate industry hope for a faster or easier recovery.