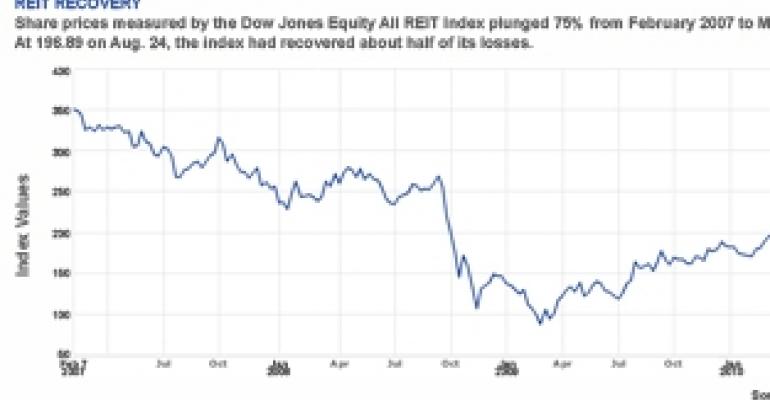 REIT Employees Get a Raise, But Pay Still Lags 2007 Levels

Real estate investment trust (REIT) employees saw their total compensation increase by as much as 15% in 2009, according to a study published this week by real estate adviser FTI Schonbraun McCann Group (SMG). The increase occurred as commercial real estate companies began to stabilize following one of the most turbulent years in the industry’s history.

At the chief executive officer (CEO) level, total compensation including salary, cash bonuses and long-term incentives such as stock shares averaged $3.3 million. The average climbed to $4.8 million for CEOs at the top-paying 25% of surveyed REITs, with the top CEOs at office and industrial REITs leading the pack with an average of nearly $6 million for the year.

While SMG doesn’t disclose information on individual responses, executive pay is no secret among publicly traded REITs and is published in SEC filings. For example, a proxy statement filed this year by office REIT SL Green Realty Corp. shows that CEO Marc Holliday received total compensation of $6.3 million in 2009, up nearly 14% from the nearly $5.6 million he received in 2008. A proxy filed by AMB Property Corp. shows CEO Hamid Moghadam took a 38% cut from the previous year in his $4.1 million in total compensation for 2009.

Median increases ranged from 3% to 15% depending on seniority levels, outpacing a negligible rate of inflation. Yet for companies that on average grew investor returns by more than 100% over the course of a year when other commercial real estate owners struggled to maintain occupancy levels in a recession, REIT compensation increases seem remarkably modest.

The reason compensation growth is slow is partly because REITs have worked hard to increase their own liquidity without flooding the market with REIT shares, which would dilute the value of existing investors’ stock. That limits the amount of shares available to award employees.

“Our study revealed significant swings in compensation levels from 2007 through 2009,” says Larry Portal, senior managing director at SMG. “Many real estate companies have been trying to balance liquidity and dilution concerns while also trying to retain employees and keep them motivated during these difficult economic times.”

The recent gains contrast sharply with the trend in 2008, when REITs cut compensation for executives and senior managers by 10% to 15% and pay remained flat for other REIT employee levels, according to Anthony Saitta, a managing director at SMG. “Depending on the level of people,” Saitta says, “we’re still probably 5% to 7% below where we were in 2007.”

REIT returns up
Those ups and downs pale in comparison with the extremes REIT investors have experienced in their annual returns over the past three years, according to Victor Calanog, chief economist at New York-based research firm Reis. Share prices tracked by the Dow Jones Equity All REIT Index fell to 86.46 on March 6, 2009, down more than 75% from a peak of 356.85 on February 7, 2007.

REITs have recovered about half of that lost ground in the 18 months since the index bottomed, however. The closing price on Aug. 24 was $197.96 – up 129% from the March 2009 low. To put that in context, Calanog points out that the All REIT Equity Index is up 8.6% year to date, compared with a 3.8% loss in the Dow Jones Industrial Average for the same period.

“Not just executives per se but folks who work in these REITs were partly or wholly responsible for these results for their shareholders,” says Calanog. “It certainly seems that they deserve at least a bit of an increase, especially since there is probably competitive pressure for them to retain top talent.”

The real estate advisory practice of New York-based FTI Consulting Inc., SMG has conducted its survey in each of the past three years and based its latest report on responses from 45 public and private real estate companies surveyed in August 2010. Those companies comprise a work force of roughly 37,000 employees.

The 2010 Compensation of Management and Professionals Survey reflects bonuses and equity awards for employee performance in 2009, along with base salaries that were in place as of April 2010.

Cash vs. equity
For mid-level managers and the many professionals at REITs who receive most of their compensation in the form of base pay and bonuses, increases in 2009 ranged from 3% to 6%, according to Saitta. Larger raises of approximately 10% to 15% went to upper-level executives who receive a large portion of their income through performance-based equity programs.

While REIT share prices more than doubled over the course of 2009, REITs scaled back on the number of shares awarded to executives. That probably reflects a conscious decision to keep overall compensation increases at a conservative level, says Saitta. Similarly, REITs cut executive pay in 2008, but to a lesser degree than share prices were falling at the time.

Restrictions limit how soon, or under what conditions, an executive can sell shares. Tying compensation to REIT performance is a good way to keep executives and other employees focused on driving up share prices, according to Barry Vinocur, editor of REIT Wrap, an online industry publication based in Novato, Calif.

“The best way to get everyone’s interests aligned is to get them all focused on the same metric,” Vinocur says. “If people are doing a good job, the stock price goes up and you get rewarded as your investors get rewarded, by your investment going up.”

Correlating compensation to REIT performance helps to guard against lavishly paying executives at times when investors are losing money. “Nobody minds rewarding people for performance,” Vinocur says. “The question is what happens when the investors don’t do well. There’s a carrot, but is there a stick?”

Looking ahead, SMG expects to see an increased reliance on performance-based shares. Average compensation increases in 2011 will range from 2.8% to 3%, SMG projects, with approximately 85% to 90% of REIT employees receiving increases.