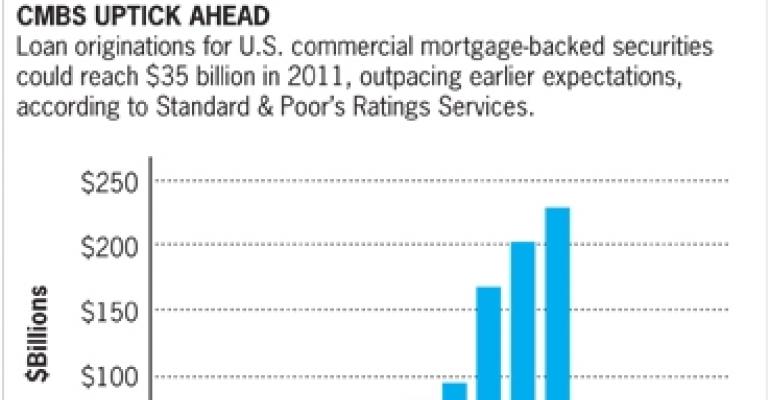 Resurgent CMBS Market Is No Cure-All for Troubled Borrowers

CMBS issuance nationally totaled $3.9 billion in the first three quarters of 2010, already putting this year’s issuance ahead of the $3.1 billion recorded in all of 2009, according to Standard & Poor’s Ratings Service.

In 2011, a surge in new loans is expected to push CMBS issuance to $35 billion for the year, the rating agency predicts in a June 30 report.

“We’re already seeing some momentum for the fourth quarter,” says James Manzi, senior director of global structured finance research at Standard & Poor’s. Issuance in the fourth quarter is projected to be $6 billion, predicts Manzi, who authored the report.

At that pace CMBS issuance would total $24 billion in 2011, but Manzi increased his projection by $11 billion based on feedback from lenders who plan to ramp up originations in the coming months.

Lenders are finding CMBS lending to be profitable again thanks to narrowing spreads, or the number of basis points added to the benchmark interest rate to compensate bondholders for risk.

Spreads widened when investors shunned risk after the onset of the financial crisis. For example, the spread on AAA-rated CMBS reached 1,400 basis points briefly in November 2008 and averaged 902 basis points in 2009.

This year the spread on AAA-rated CMBS has averaged a much tighter 332 basis points. That’s particularly good news because the benchmark 10-year Treasury yield, which stood at 2.6% on Oct. 5, is also near a historic low. That enables CMBS issuers to sell bonds at higher prices than they could a year ago.

Standard & Poor’s projection assumes that spreads and the 10-year Treasury yield will remain at today's levels through the end of 2011. The agency also notes that several new lenders have entered the CMBS arena.

And with $40 billion of fixed-rate CMBS loans maturing in 2011 and as much as $300 billion of non-CMBS commercial mortgages coming due, there may be plenty of funding opportunities for those lenders to choose from as they increase originations.

The prospect of $35 billion in CMBS loan originations is encouraging news for the commercial real estate industry, says Robert Bach, chief economist with real estate services provider Grubb & Ellis. Whether investors and other market observers will find that lending amount to be significant depends on their perspective, he says.

Borrowers vying for financing will hardly notice another $35 billion in available funding, Bach explains. That’s particularly true in light of the $1.4 trillion in commercial mortgages scheduled to mature and require new financing over the next four years. The projected CMBS issuance also pales in comparison to the peak in 2007, when originators cranked out $230 billion in loans that were rolled into CMBS transactions.

CMBS lending could fund a substantial portion of transaction volume in 2011, however. Commercial real estate sales this year through August totaled $55 billion in the United States (excluding hotels), Grubb & Ellis found. Even if sales proliferate next year, CMBS lending at or near projected levels could fund a large portion of those deals.

Bach points out that the market is unlikely to see transaction volume on a par with the last market peak for some time. A recent survey of Grubb & Ellis clients suggests that once the market recovers from its current slump, annual U.S. commercial real estate sales are projected to reach the 2004 level of $223 billion. “If that’s the new normal, then $35 billion is relevant,” says Bach.

The forecast calling for $35 billion in CMBS issuance in 2011 will have ripple effects that increase the availability of funding from other sources, according to Bill Hughes, senior vice president and managing director of Marcus & Millichap Capital Corp., a financial intermediary based in Encino, Calif.

Although Hughes is pleased with recent gains in securitized lending volume, he is waiting to see if the underwriting criteria is extended to include a wider swath of properties as collateral. And he is not alone.

New CMBS deals are backed almost exclusively by the upper crust of commercial properties, all stabilized assets that command excellent locations in prime markets. By definition that excludes investors with properties outside the major markets, or with properties operating with some level of vacancy.

“We have yet to see new origination or refinancing activity trickle down to secondary and tertiary properties from suburban locations,” says Mancuso.

The market is bifurcated between strong, healthy properties with a number of credit options to choose from, and properties that have few if any credit options because their owners are struggling with vacancy issues, loan delinquencies or defaults. “There isn’t a lot of risk-taking embodied in these (CMBS) deals,” he says.

He adds that the markets hardest hit during the downturn will take the longest to recover, including Nevada, Arizona, Ohio, Michigan, Florida and Georgia.

In the meantime, issuers may have a hard time finding enough suitable properties to place $35 billion in CMBS loans unless they alter their criteria, concludes Hughes of Marcus & Millichap.