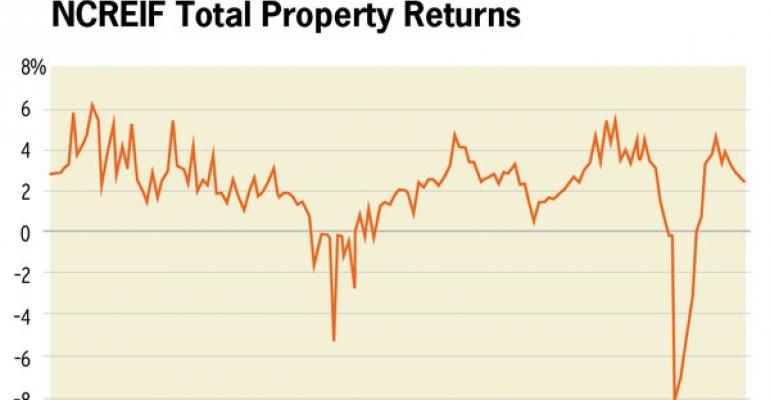 Prices keep rising for commercial real estate properties, according to indices kept by top real estate firms—but not as quickly as in the years just after the crash.

“There’s been a pause in the numbers,” said Jeffrey Havsy, director of research for the National Council of Real Estate Investment Fiduciaries (NCREIF). “People are waiting to see… We’ve had some economic uncertainty. Retail sales are sluggish.”

Top indices from NCREIF, Moody’s/Real Capital Analytics, the CoStar Group and Green Street Advisors all show a sharp, fast recovery in 2010 and 2011 from the real estate crash. However, the rise in prices is slowing for the most desirable properties in the safest markets. At the same time, some information shows that rising prices have spread to include more properties in more markets as the recovery widens.

Prices came roaring back in starting in 2010 for the institutional-quality investments tracked by NCREIF. Returns stayed above 3 percent every quarter in 2011, slipping to about 2.5 percent in the first quarter of 2012. Returns stayed in positive territory in the second quarter, but slipped again by a few basis points, according to NCREIF’s Preliminary Snapshot report on its Open-End Diversified Core Equity index.

The institutional-quality assets tracked by Green Street Advisors’ Commercial Property Price Index have also slowed their rise. “For the last year the Index has risen at a much more measured pace,” said Peter Rothemund, an analyst for Green Street. “I call it drifting upwards.”

Early in the recovery, commercial real estate price rose quickly despite uncertain economic times, recovering value lost in the crash. But to continue to rise after a two years of recovery, we need to do better than the uncertainty we have been living with, according to Havsy.

But there are some differences between different indices. The Moody’s/Real Capital Analytics Commercial Price Property Indices show a sharp crash and recovery over the same period, but the recovery is not as strong. Prices for commercial properties are still down 21.5 percent from their peak during the boom, according to Moody’s/RCA. Over the three months the ended May 12, values inched up just 0.9 percent, according to a July 2012 update to the index.

In comparison, the Green Street’s CPPI shows real estate prices just 5 to 10 percent below their peak during the boom. “Now they have recovered nearly all of that ground,” said Green Street’s Rothemund. “We are in this super low interest rate environment. That is super good for property values.”

Less prime properties in less major markets still improved, but not as strongly. “Major markets have outperformed non-major markets over the last one, three and 12 months,” according to the report. “Due to persistent economic uncertainty, the flight to quality remains unabated.”

“Recovery widens,” according to CoStar

However, a wider recovery is taking root for commercial property values, according to the CoStar Commercial Repeat Sale Indices, kept by the CoStar Group.

Both components of CoStar’s equal-weighted U.S. Composite Index show positive gains in May 2012 over the year before — both Investment Grade and General Commercial. That’s “an indication that the recovery in property pricing is reaching across all size and quality dimensions of the commercial real estate sector,” according to CoStar.