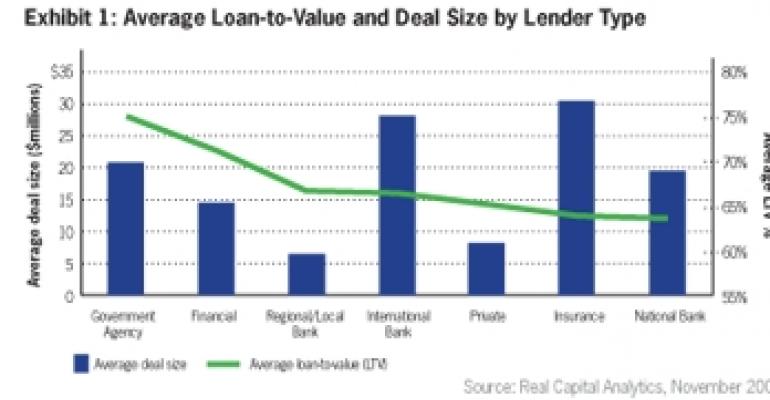 Several positive developments appear to be emerging in the real estate capital markets, providing a glimpse of optimism as investor sentiment begins to rebound.

Meanwhile, the commercial mortgage-backed securities (CMBS) market has shown signs of life and spreads have narrowed. Commercial mortgage rates have tightened up. We believe these signs are pointing to a thawing in the real estate capital markets.

As of November 2009, the average commercial mortgage rate ranged from approximately 7% to 7.2%. Spreads over the 10-year U.S. Treasury yield narrowed to a bandwidth of 370 to 430 basis points compared with 430 to 500 basis points three months ago.

Mortgage spreads for core retail, warehouse, and office contracted by about 50 basis points, while spreads for apartment and hotel properties essentially held steady during the same period.

For apartments, it can be argued that spreads were already tight. However, with delinquency rates on apartment properties rising sharply, lenders may begin to increase rates in the near term. As the riskiest sector, hotel mortgage rates remain relatively high.

On the CMBS front, all tranches have rallied appreciably. Spreads on the AAA and BBB CMBX indices have narrowed by over 130 basis points and 1,500 basis points, respectively, over the past three months.

We believe that both mortgage and CMBS spreads will continue to drift downward, albeit at a slow pace as real estate fundamentals continue to stabilize.

Though the volume of commercial mortgage originations in the third quarter of 2009 was down 54% from the same period in 2008, there are hundreds of active lenders providing mortgages, albeit at more conservative terms.

According to Real Capital Analytics, regional and national banks originated 44% of the total lending volume year-to-date through October, while international banks and insurers accounted for 10% and 13%, respectively.

Lending standards and deal size also vary noticeably among these lenders, with insurers and international banks financing the largest deals on average [Exhibit 1].

According to the Federal Reserve Senior Loan Officer Survey, more than 80% of domestic banks surveyed in the fourth quarter of 2008 indicated that they were tightening lending standards on commercial real estate loans.

The October survey showed that only about 35% of banks reported tightening standards. Although the percentage of survey respondents who are tightening commercial real estate underwriting standards remains high relative to the historic average of 17%, the improving trend is clear.

This issuance was the first transaction sold under the Federal Reserve’s Term Asset-Backed Securities Loan Facility (TALF), which aims to lower funding costs for issuers by offering investors funding for the purchase of the securities.

The deal was actually priced below existing levels for the CMBS issues. The $323 million AAA-rated five-year notes came to a yield of 3.8%, and at a premium of 140 basis points to the five-year interest rate swap benchmark.

We believe the tight spreads demonstrate that the market has a strong appetite for well-structured and transparent CMBS products of this nature.

Several REITs, including Vornado Realty Trust and Inland Western Retail Real Estate Trust, are expected to request funding through the TALF program for the origination of new funding.

There is an estimated $2.1 billion of new and legacy CMBS in the pipeline under the TALF program. Still, the amount is only a small fraction of the market need.

We believe that this success could signal the beginning of the recovery for the private CMBS securitization market, which has been essentially non-existent since June 2008.

In a nutshell, despite some improvements in the capital markets, commercial mortgage debt remains both expensive and difficult to obtain.

We believe that the lending environment will continue to improve over the next year, including an increasing volume of CMBS originations.

Those improvements will not, however, likely be enough to fully address the $1.1 trillion of commercial real estate debt that will mature over the next three years (2010-2012).

With underwriting requirements remaining tight, traditional balance sheet lenders under stress and reluctant to lend, and regional bank failures rising, we expect a continuing financing gap in the market.