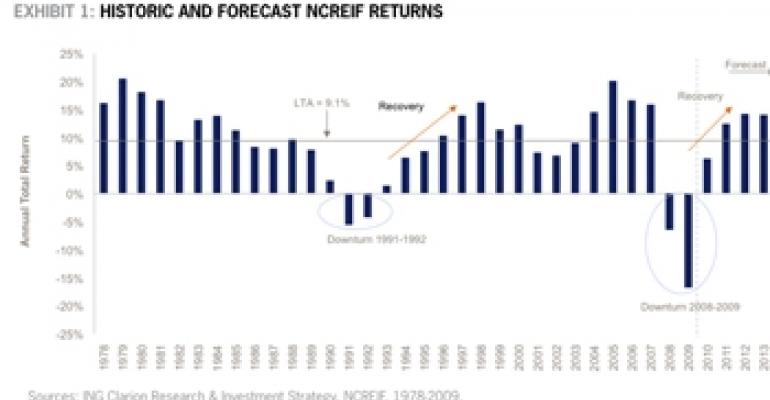 The unraveling of the global economy has led to dramatic losses in commercial property values. Through 2009, the benchmark NCREIF Property Index (NPI) has declined by approximately 30%, the sharpest and deepest downturn in the 30-year history of the index.

Limited financing options and stricter underwriting standards are adding to the market distress, as more than $1.1 trillion in real estate debt is scheduled to mature from 2010 through 2012. Refinancing pressures will likely continue to result in distressed sales, putting additional downward pressure on property values.

While we believe the operating environment for real estate will remain difficult through 2010, we also believe that the worst of the value declines are likely behind us. As the economy recovers, we expect property market fundamentals to start to improve in late 2010.

We believe the NPI total return for 2010 is likely to be positive as a minor depreciation in property values is offset by stronger income return. We expect total returns to recover to near the long-term average in 2011, and to exceed that average over the following few years [Exhibit 1].

Therefore, we believe the market environment over the next 12 to 18 months may present excellent opportunities to purchase properties at significant discounts to both the previous market peak and asset replacement costs. Purchasing near the bottom of this cycle should position new investments to capture strong income and appreciation returns during the recovery phase, potentially exceeding historic averages.

In order to take advantage of the coming recovery, we explored the performance of the five major property sectors in previous market cycles. Looking back, different property sectors behaved differently through the expansion and contraction cycles.

We believe these distinctions make sense based on the volatility (beta) of the property sectors. The retail sector, for example, has the lowest beta over the past 20 years, while office and hotel have the highest. However, high-beta property sectors such as office and hotel tend to outperform the benchmark, sometimes by a large margin, during expansion periods.

What’s an investor to do?

Based on this analysis, an investment strategy for core real estate would likely focus on holding apartment, industrial and retail as long-term core assets (five to 10 years), while overweighting or underweighting the more volatile office and hotel sectors for shorter periods (two to four years). The higher-beta sectors would ideally be acquired during the early stages of a real estate recovery cycle and sold near the cyclical peak.

As the real estate markets begin to stabilize, we expect to see increasing activity in the office and hotel sectors as investors seek to capture the historic benefits of these property types during the recovery.