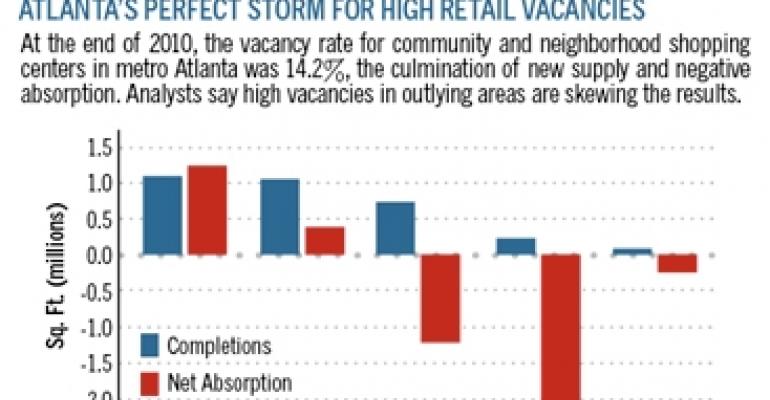 Southeast Is Sweet Spot for Owner of Grocery-Anchored Centers

Joe Dykstra works in what he calls the “scalpel business.” As executive vice president of Westwood Financial Corp., Dykstra scours the retail landscape in major metros for mature, grocery-anchored shopping centers to acquire and add value. Westwood has acquired more than 30 properties over the past three years in Florida, Georgia, Texas, Colorado, Arizona and Kansas. The Los Angeles-based firm increased its portfolio in 2010 to more than 100 shopping centers and retail properties in 23 markets.

Westwood now plans to sell off $100 million in retail properties in the Western states, particularly some properties in Phoenix, and reinvest the capital in the Southeast, including Atlanta, Charlotte, Raleigh and Florida. That’s because the Southeast is projected to be in the path of significant job and population growth over the next 20 years.

“Maybe retirees will move to the Southwest, but the educated workforce and where a lot of the job growth is going to be is in the Carolinas and here in Atlanta,” said Dykstra during a recent stay at the InterContinental Hotel in Buckhead.

Unlike Phoenix, where 10 to 15 grocers have come and gone over the last several years, said Dykstra, the Atlanta market is less fragmented. The July 2010 edition of The Shelby Report listed Publix with 143 stores in metro Atlanta and a 27% market share; followed by Kroger, 131 stores and 25.5% market share; and Wal-Mart, 58 stores and 23% market share.

“Here in Atlanta you’ve only had really the Big Two [Publix and Kroger], and so you haven’t had that oversupply of grocery-anchored retail that has been developed in Phoenix, or even in Las Vegas,” said Dykstra.

Despite the pullback, Tesco still operates 28 Fresh & Easy stores in the Phoenix area. “You’ve got competition on all sides, from convenience-oriented grocery to the traditional ones that are there,” said Bernie Haddigan, principal of Atlanta-based Haddigan Capital, a real estate advisory firm.

Haddigan also is a retail owner in Phoenix, which is struggling to recover from the housing bust. “A lot of the retailers in Phoenix were chasing [new developments]. But with the overall economy collapsing, that’s all dead. It’s going to be a long, slow recovery for Phoenix.”

In Raleigh, Westwood last year bought the 86,662 sq. ft. Lynwood Collection Shopping Center for $11.2 million. Anchored by Kroger, the center’s tenants include L.A. Boxing, Vincent’s Fred Astaire Dance Studio, Jenny Craig, The UPS Store, Great Clips, Enterprise and Verizon. Built in 1988, the center traded at a 7.5% cap rate. “The older the property the better,” said Dykstra, “because you have confidence the rents have found their happy medium.

Appearances can be deceiving

The retail vacancy rate in Atlanta stood at an eye-popping 14.2% at the end of 2010, according to New York-based real estate research firm Reis. But much of that unoccupied space was concentrated in peripheral areas, according to Haddigan.

“The closer you get to the center of the metropolitan statistical area (MSA), which would likely be Midtown or Buckhead, the more efficient and effective the properties are operating.”

Development has returned on a select basis. Edens & Avant is building a Publix as part of the $42 million Moores Mill Village shopping center in northwest Atlanta. Groundbreaking on the supermarket and more than 30,000 sq. ft. of shops and restaurants will be this fall. The project is within a tax allocation district. A CVS drugstore is already open on the site.

Quality properties always get leased up, said Dykstra. The downturn spooked a lot of investors, but they’ve come to realize how resilient bread-and-butter retail assets can be. “You want to buy a grocery-anchored shopping center because people still have to eat. They still need to get their hair done, or get their nails done at the salon.”

I’ll stick to the haircut.