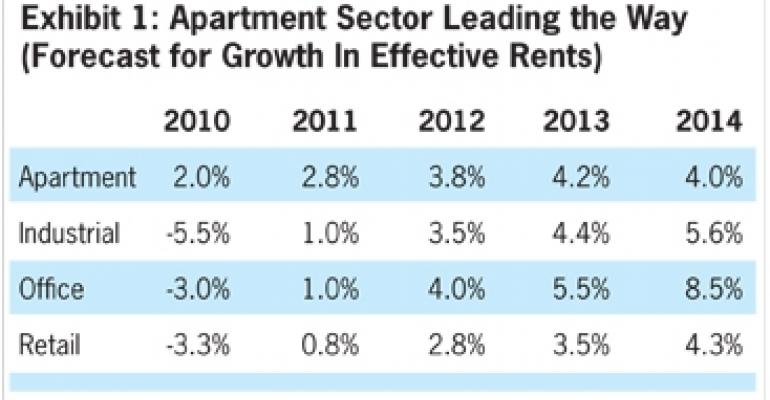 Commercial real estate performance generally lags economic growth by about four to six quarters. As our firm, ING Clarion Partners, suggested earlier this year, 2010 appears to be a transition year, moving from the steep downturn of 2009 toward a sustainable recovery in 2011.

Real estate market values fell by about 32% from the peak in mid-2007 to the first quarter of 2010. The price decline was steep and quick, in contrast to previous recessions when write-downs dragged on for several years. Although we cannot predict an exact recovery timeline, we believe we are in the early stage of the next upturn for well-leased core properties in primary markets.

The National Council of Real Estate Investment Fiduciaries (NCREIF) has been tracking returns for properties owned by institutional investors such as pension funds for more than 30 years. The NCREIF Property Index (NPI) tracks the performance of returns for more than 6,000 properties, breaking down returns by property sector, market and region. The NPI also provides returns data broken into income and appreciation components.

In the second quarter of 2010, the NPI registered an increase in the overall appreciation return for the first time since mid-2008. We believe that additional declines in value for the types of properties tracked by NCREIF are now largely behind us. Pricing for the highest-quality assets in primary markets has clearly begun to increase in recent months. Pricing for Class B and C properties in secondary and tertiary markets continues to decline, but at a much slower rate than previously.

Despite the slow and uneven progress in the general economy, real estate capital markets have improved remarkably over the past year. Lenders, especially life insurers and foreign banks, have re-entered the commercial mortgage market. Increasing competition among lenders is leading to lower mortgage rates and higher loan-to-value (LTV) ratios. This added liquidity has helped to fuel increased transaction volumes for core properties.

With vacancy rates high, construction financing limited, and rents below levels necessary to justify new construction, supply pipelines are far below long-term averages. The next three years should see a limited amount of new deliveries.

We expect to see modest growth in effective rents during late 2010 or 2011 for most property sectors and markets, though increases in asking rents will be slower to emerge [Exhibit 1]. Among the four major property types, the apartment sector is expected to continue to lead the recovery, while we expect retail to lag the other sectors over the next few years.

The NPI total return for the first half of 2010 was 4.1%, much stronger than most observers were predicting after the 16.8% decline in 2009. Looking ahead, our firm is forecasting a 10.2% total return for the NPI index in 2010, driven by the return of positive capital appreciation and a modest improvement in income.

As more investment capital flows into the commercial real estate sector, we expect capitalization rates — the initial returns to investors based on purchase prices and net operating income — to drift downward over the next few years. With rising net operating income and cap-rate compression, it is possible that the NPI index could achieve annual total returns well above the long-term average over the next several years [Exhibit 2].

While operating fundamentals remain weak in 2010, especially for the industrial, office, and retail sectors, investors are beginning to adjust their outlook regarding the risks associated with U.S. core real estate. In fact, the global search for yield is already putting rapid downward pressure on the cap rates of higher-quality properties.

We expect the delivery of new supply to remain at very low levels for at least the next three years, setting the stage for a potentially rapid recovery in commercial property fundamentals when we experience sustained growth in demand.