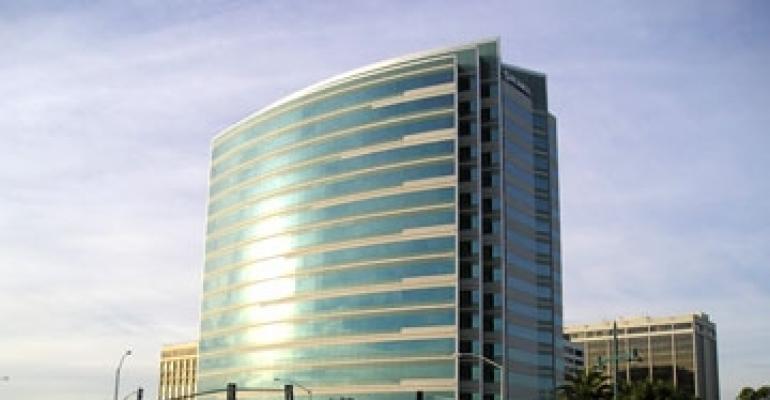 Public pension funds are under enormous pressure to claw back a seemingly endless decline in the value of their real estate investments. The extent of the damage is revealed in the release of a few of the larger funds’ annual reports.

The bellwether institutional investor reported that the value of total assets under management at the end of June was $180.9 billion, down from $237 billion a year earlier, or a drop of 23.6%.

Real estate values accounted for the biggest chunk of the decline, falling 35.8% during the period, followed by private equity with a 31.4% decline.

In July, CalPERS’ joint venture with Houston-based Hines defaulted on a $152 million mortgage secured by three office buildings in Emeryville, Calif. The buildings, totaling 814,000 sq. ft., are part of the 1.2 million sq. ft. Watergate office complex. A fourth building on the site is owned by a separate entity, Hines REIT, and is not part of the default.

NOP Watergate LLC, the joint venture that defaulted on the buildings, paid $335 million for the buildings and a separate restaurant in late 2006, at what most observers consider to be the height of the market. Now it is surrendering the property to the lender, Pacific National Bank. It is unclear what strategy the bank intends to pursue.

In another stinging and unprecedented move, New York-based rating agency Moody’s Investors Service placed its AAA-rating on CalPERS under review.

Despite its multitude of travails, CalPERS is certainly not alone in the “falling values” department. The California State Teachers’ Retirement System (CalSTRS), another institutional bellwether, reported that its total asset values fell by 25% in the fiscal year ended June 30, to $118.8 billion.

The value of CalSTRS’ real estate assets fell by an astounding 43% during the year, due largely to the fund taking a large write-down on its assets for 2008 rather than spread out the pain over a few years.

Farther east, the Ohio Public Employees Retirement System saw its total assets grow by 3% to $50.2 billion year-to-date through June 30, but real estate was a big drag on its results. The fund’s real estate assets, which account for about 8% of the fund’s total assets, dropped 12.2% during the same period to approximately $4.2 billion. The decline was beat only by the drop in private equity holdings, which declined 18.22% for the year.

Optimism is growing that a turnaround is on the doorstep. In recent months, the stock market has recovered much of losses notched over the past year. In early August, New York-based rating agency Standard & Poor’s issued an encouraging report on the recovery of stock prices for publicly traded real estate firms. In the second quarter, the S&P property and REIT indices saw sharp rises, following a drop of nearly 20% in the first quarter.

But many industry experts believe that more pain is ahead. According to Robert White, president of New York-based researcher Real Capital Analytics, some $2.2 trillion of properties acquired or refinanced after June 2004 have lost value since their transaction date.

Given that prices have declined 25% on properties purchased or refinanced from 2006 through 2008, “the equity in $1.3 trillion of properties is at great risk, if not already wiped out,” says White.

Both institutional and private owners alike see no signs of an immediate rebound in the property sales market to help stem the tide of dwindling values. Commercial property sales through the first six months of 2009 amounted to only 7% of the volume reached at the peak of the frothy sale market in the first half of 2007, according to Real Capital Analytics.

But White also notes that the number of office property sales in June was 24% higher than in May. “The jump in activity in June may be an early signal that buyers are returning, lured by lower prices,” he says.

Still, June was one of the worst months to date for new distress, with $13.6 billion worth of properties falling into default, foreclosure or bankruptcy. According to White, by the end of June the total value of distressed commercial properties nationwide was nearly $115 billion.