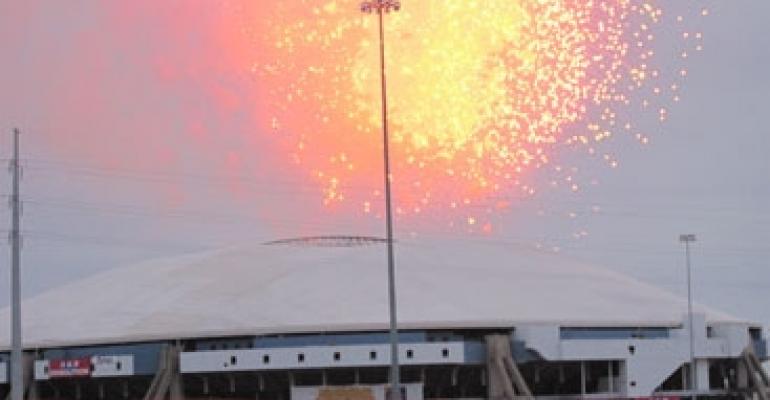 Texas Stadium Ends with a Bang, But the Site’s Future Remains a Mystery

IRVING, TEXAS — With helicopters buzzing overhead, firemen standing watch and a loyal crowd lining the highway, Texas Stadium, home of the Dallas Cowboys for 38 years, was blown to bits on Sunday.

Just 750 feet from the implosion, the ground shook like an earthquake as blasts pulsed underfoot every half-second, 55 in all. Fireworks preceded the initial blast, and in only a minute, it was over. The stadium, built for $35 million in 1971, lay in ruins under a swirling cloud of dust.

Texas Stadium is only one of many arenas to reach the end of a lifespan in recent years. Shea Stadium in Queens, N.Y., was home to the New York Mets baseball team for 44 years before it was demolished in 2008. At Capital Centre arena in Maryland near Washington, D.C., crowds of more than 18,000 watched hockey and basketball games and enjoyed performances by Elvis Presley, The Rolling Stones and Michael Jackson over the years. The arena was dynamited in 2002. In February 2010, Giants Stadium in East Rutherford, N.J., was demolished after 34 years of service.

These iconic sports structures worked their way into the cultural fabric of their communities over just a few decades and garnered an intensely loyal following. That was evident on Sunday. As the deafening booms stopped and Texas Stadium fell, tears rolled down the cheeks of Dean Smith, 14, of Prosper, Texas. The stadium meant time spent with his father and grandfather at a place he never can revisit. “I’m sad to see it go,” he said. “It’s kind of overwhelming.”

Nearby, Kara Moody, 18, also was transfixed by the destruction. “I spent many times here with family members — my grandparents and my cousins,” she said.

“It’s an end of an era,” said Jerry Jones Jr., president and CEO of the Dallas Cowboys, as he strode through a group of onlookers. The newer $1.2 billion stadium in Arlington, Texas where the Cowboys moved after the 2008 season is “wonderful,” said Jones. “But we had a lot of good memories here, too.” The Cowboys’ 33-acre corporate home and practice facility remains in Irving, a flat-roofed, single-story building in a residential neighborhood.

“The memories of 38 years won’t disappear just because the building’s going to disappear,” said ESPN sportscaster Chris Berman, serving as master of ceremonies.

The theme echoed at a farewell luncheon two days before the implosion, when former Dallas Cowboys reminisced about their years at the stadium with the late Pro Football Hall of Fame coach Tom Landry.

They talked of the team’s five Super Bowl victories and former quarterback Roger Staubach, also former chairman and CEO of tenant rep firm The Staubach Co., which was sold to brokerage Jones Lang LaSalle in 2008 for more than $500 million.

Retired Cowboys safety Vince Albritton, 47, recalled the glory days of 1984 through 1991. He made the team his rookie year and wound up in Texas Stadium. “I was concentrating on not blowing assignments,” he said. “A lot of history. Something that can be remembered all our lifetimes.” Today, Albritton is a licensed plumber.

Michael Downs, 50, was a free safety with the Cowboys from 1981 to 1988. Now he sells real estate, but the applause of two decades ago still rings in his ears. “The roar of the crowd, when you’re in the moment, you really miss a lot of it. But some of my most exciting times were just being introduced at the beginning of the game, coming out of the tunnel and having your name called, everybody in Texas Stadium cheering for you as you run out on the field. You don’t get that in ordinary life. But you get that in Texas Stadium.’”

On Oct. 27, 2002, in Texas Stadium, Emmitt Smith broke Walter Payton’s record of 16,726 yards to become the NFL’s all-time leading rusher. Along with Staubach, former quarterback Troy Aikman, and running back Tony Dorsett, Smith became a member of the Pro Football Hall of Fame. Many other stars lit up the stadium and joined the Hall of Fame.

Alicia Landry, widow of the coach, recalled athletes with nicknames like “Butch Cassidy,” “The World’s Fastest Human,” “Buzz” and “The Thrill.” She added, “It was a special time and a special place for the team and the fans.”

Throughout Saturday, cars pulled up to the fenced-off stadium and visitors hopped out for one last snapshot. On Sunday, the gates opened at 2 a.m., and long before dawn, more than 5,000 cars snaked into the lots before police halted traffic on highways leading to the implosion site. In all, about 20,000 onlookers gathered.

Destroying the 65,000-seat stadium cost nearly $6 million. It required 1.5 tons of explosives, and crews drilled some 2,700 holes in columns so they would fall like dominoes.

At last, 11-year-old Casey Rogers of Terrell, Texas, pushed the detonation button. He is a former foster child who founded “Casey’s Heart,” an organization that provides food and clothing to the homeless. The crowd came to its feet and surged forward to the police line as the columns toppled.

Updating the stadium wasn’t an option, says Irving Mayor Herbert Gears. Retrofitting the stadium to meet federal standards for the Americans with Disabilities Act would have cost $100 million, and the city simply couldn’t afford it. “It didn’t make a lot of economic sense, and we felt like this is what we had to do.”

What’s next for the 80-acre stadium site? Eventually, the City of Irving, which owns the land, plans to develop it, but no plan has been selected. Cleveland-based Forest City Enterprises proposed an ambitious, 382-acre development for the stadium site and adjoining properties, but that was before the recession intervened.

The city has leased the acreage for up to 10 years to the Texas Department of Transportation for about $16 million annually for use as a construction-staging site. “That piece of property is right in the center of the fastest-growing metropolitan area in the country,” said Mayor Gears.

Tanger Factory Outlet Centers, based in Greensboro, N.C., also has considered developing the acreage. “Tanger has leased a site across from the stadium and maintains that option. It’s about 50 acres,” says Gears. But developers know that nothing can be built until a new rapid transit station is completed in late 2011, and the highways are finished. “It’ll be six or seven years of construction.”

Completing the station will create an opportunity to build transit-oriented development, the mayor notes. People could live in high-rise units and take the train to work. Developers also could create retail and office space for workers. Such a project could add $2 billion to the city’s tax base, says Gears.

But that will take time, and the city is in no hurry. “We just don’t want to put out unreasonable expectations that we’re going to see something replace Texas Stadium as soon as it comes down,” the mayor adds.

But one thing is certain: The landscape has changed. Soon no trace of the glory days will remain where the rubble now lies. Says Gears, “The footprint of the stadium will be cleared by the end of June.”