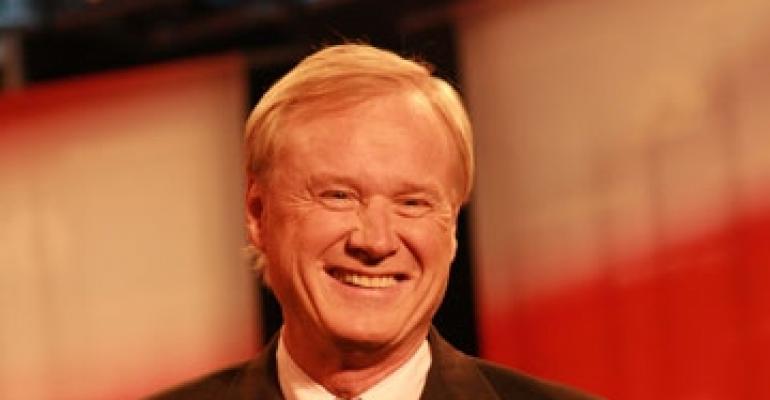 NEW YORK — Chris Matthews, host of “Hardball” on MSNBC, has some advice for President Barack Obama on how he can get back in the good graces of the hotel and meetings industry. “I do think that he has to start saying, ‘Don’t be afraid to travel this summer and get out there and visit your country,’” Matthews told Jonathan Tisch, chairman and CEO of Loews Hotels, in a one-on-one interview Tuesday at the Waldorf-Astoria.

The dogged and energetic political talk show host played the role of guest during the International Hospitality Industry Investment Conference hosted by New York University. The 31st annual event attracted hundreds of professionals from a cross-section of lodging disciplines.

The television journalist’s advice for Obama comes after the president early this year fired a salvo at financial institutions that received bailout money from the government. "You can't get corporate jets. You can't go take a trip to Las Vegas or go down to the Super Bowl on the taxpayers' dime. There’s got to be some accountability and some responsibility,” Obama remarked in February during a town hall meeting in Elkhart, Ind.

The president’s comments drew the ire of city leaders in Las Vegas, whose economy has been battered by a rash of home foreclosures and a sharp downturn in the gaming industry. The message to the general public, they feared, was don’t come to Vegas.

“Mistakes were made. There was too much of this beating up on corporate executives, too much of this sackcloth and ashes approach to recovery. Penance won’t work,” said Matthews, referring to Team Obama’s scolding of Corporate America.

The administration faces a much bigger challenge, he believes. “We have to reflate this economy. We’re actually reflating it right now. Bernanke is running the presses,” added Matthews, referring to U.S. Federal Reserve Chairman Ben Bernanke. (The Fed has purchased $450 billion in mortgage-backed securities to keep credit flowing to the U.S. housing market. It's also purchased $79 billion in bonds issued by government-sponsored enterprises Fannie Mae and Freddie Mac.)

Fed policy is of crucial importance right now, he emphasized. “We’re trying to reflate an economy, which is still in a deflating mode. Commercial real estate is still going down. We have to keep spending money. Investment and consumption and everything have to keep going. And the consumer is heavily holding back.”

Matthews, who is married to Kathleen Matthews, executive vice president of global communications and public affairs at Marriott International, lamented the divisiveness and pettiness that’s pervasive in national politics today. He took particular issue with the Republican Party leadership for its sharp criticism of the President and First Lady’s jaunt to New York last weekend for dinner and a Broadway show. The presidential couple’s mode of transportation was a small jet that departed from Andrews Air Force Base.

The president said he was fulfilling a campaign promise to his wife, but the GOP chastised him for spending a night on the town while the rest of the country continues to grapple with a deep recession. The White House has not released the cost of the trip.

“This is the cheapest, most pathetic, most jealous piece of … I can’t call that leadership,” said Matthews of the press release put out by the Republican Party’s top brass. “I am so proud to finally have a president, an upper middle class president in his manner, who thinks it’s neat to bring his wife to New York to see a play.”