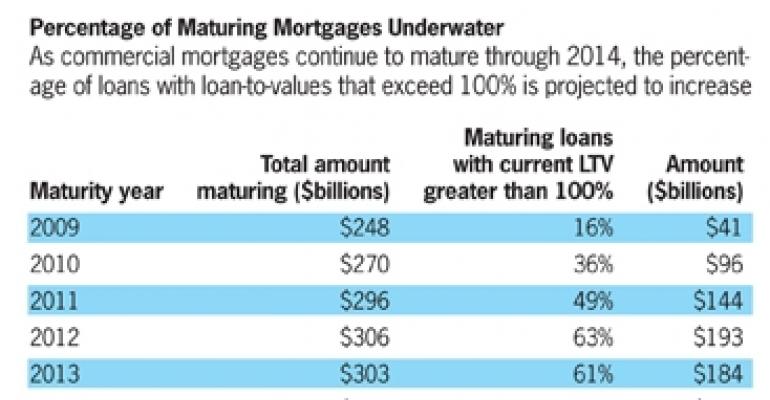 More than 36% of the $270 billion in commercial real estate loans maturing in 2010 are under water, meaning the mortgage balance is greater than the value of underlying property, according to data from Oakland, Calif.-based research firm Foresight Analytics. And the worst is yet to come.

“The mortgage maturity issue was problematic for lenders already in 2009, so it’s really just going to get worse in 2010 — and it looks like beyond — unless you expect a meaningful rebound in prices,” says Matthew Anderson, a partner at Foresight Analytics. “The issue of the rising dollar volume of maturities that is more and more under water will become a greater problem for lenders of all types with the passing of each year.”

By contrast, only 16% of commercial mortgages that matured in 2009 were under water, Anderson estimates.

This year’s maturity issues may prove worse than Foresight’s figures suggest, because the projection of upside-down loans maturing, at 36%, doesn’t include loans that would have matured in 2009 and were simply extended for one year. That could add substantially to the volume of underwater maturities this year, based on Anderson’s estimate that 60% of mortgages with 2009 maturities were granted one-year extensions. “That’s obviously is just going to add to that [36%] figure.”

Kicking the can down the road

Banks hold the greatest number of the maturing loans through 2014, a total of $785 billion. Of that amount, 68%, or $535 billion, are projected to be under water over the same period. With little liquidity in the marketplace (yet no real pressure from the federal government to write down the problem debt), how will banks deal with their underwater loans?

According to Anderson, there are two likely scenarios. The rosiest picture entails banks extending the loans, adding to the next year’s already growing volume of underwater maturing loans.

The Armageddon scenario could go something like this: An unforeseen panic or event pressures banks and other lenders to unload problematic loans, taking hefty losses on maturing mortgages that are under water or otherwise unable to qualify for refinancing.

The longest commercial mortgage-backed securities (CMBS) loan extension to date has carried a two-year term. As of Dec. 8, the volume of all CMBS loans sent to special servicing for resolution had climbed to 9%, an all-time high, according to commercial real estate data and analytics firm Trepp LLC, which is based in New York.

Special servicers face a growing number of loans backed by properties with multiple problems, which may include a value that is under water, or insufficient cash flow to cover debt service or the special servicer’s mounting fees.

“For those loans headed into default, where the cash flow is insufficient and the value is low, it can be pretty costly for the special servicer to maintain payments on those loans,” notes Anderson. “I suspect what we’ll start to see with CMBS is an acceleration in resolving defaulted loans one way or another.”

A special servicer faced with the cost of air conditioning an empty building may opt to keep the AC off, even though that choice could result in a $30 million mold issue down the road. Without needed maintenance, experts predict that many of the properties piling on fees in special servicing will decline.

The $93 billion of commercial real estate loans held by the life companies slated to mature through 2014 is predominantly backed by institutional, Class-A properties that have few issues with cash flow.

“Life companies are not immune, but they’re in a somewhat different spot than most of the rest of the market,” Anderson explains. “Traditionally life company underwriting would be more conservative. The loan-to-values in the first place would be lower so the underwater loan proportion would be noticeably lower for the life companies.”

There’s one caveat to the above scenario. Unless life company loans were written to 60% loan-to-value ratios, the roughly 40% decline in commercial real estate valuations across the board may have those LTVs approaching the 100% mark.

The upshot of the problem? “As much as the regulators would like to press the banks even harder and force everyone to clean up their balance sheets and move on, they recognize that if they did that they would create much bigger losses in the near term and exacerbate the whole capital problem — or lack of capital — for banks.”