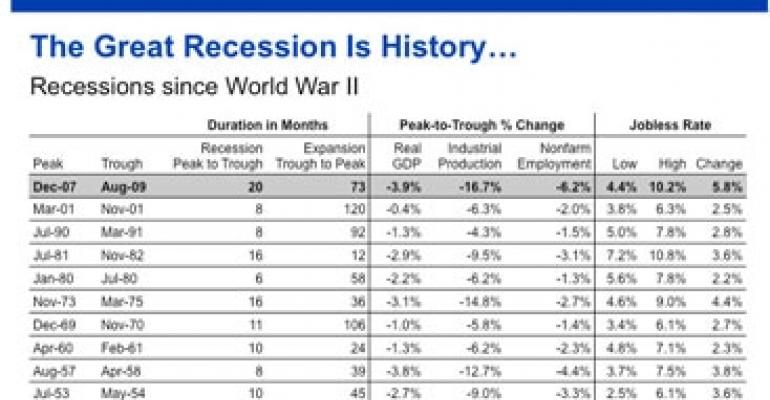 “The downturn that we went through was the worst since the Great Depression, and it’s been about double the typical recession,” said Augustine Faucher, director of macroeconomics for Moody’s Economy.com, during the opening session of the Urban Land Institute’s Spring Council Forum in Boston. The three-day conference has attracted about 3,000 attendees.

“The Great Recession was 20 months peak to trough — December 2007 to August 2009. The typical post-World War II recession has lasted 10 months. We’re talking about twice the length,” pointed out Faucher during a presentation at the Hynes Convention Center early Wednesday afternoon.

Moody’s Economy.com says that the severity of the recession that is now giving way to slow but steady recovery can be measured on many fronts [see chart].

The national unemployment rate had bottomed out at 4.4% prior to the start of the recession that began in December 2007. “By the time it’s all said and done, it’s going to peak later this year at around 10.2%,” said Faucher. “That’s an increase in the unemployment rate of 5.8 percentage points.”

Why is the unemployment rate expected to continue rising despite the fact that the economy is showing clear signs of growth? After all, payroll employment rose by 162,000 in March, and that trend is expected to hold steady, or even accelerate, in the months ahead.

The fact is that a lot of people have left the labor force, said Faucher. “These are people who have lost their jobs. They’ve become discouraged because they’ve been looking for a job and can’t find it.”

To be counted as unemployed, a person has to be actively looking for a job. “There are a lot of people out there who have given up, but will return to the labor market as the job market picks up,” said Faucher.

The economy needs to generate 200,000 to 250,000 jobs per month to make a dent in the unemployment rate, and that won’t happen until next year, he predicts.

Faucher gives high marks to policy makers in Washington for stabilizing the banking system by taking a number of extraordinary steps, including conducting bank stress tests and implementing the Troubled Asset Relief Program.

That stabilization is reflected in the TED spread, the difference between the interest rates on interbank loans and short-term U.S. government debt (three month LIBOR versus three-month Treasury yields). The TED spread widens during periods of unrest in the financial system, explained Faucher [see chart].

In the fall of 2008, the TED spread widened to almost five percentage points due to a confluence of events: the collapse of Lehman Brothers, the federal government takeover of Fannie Mae and Freddie Mac and the uncertainty over whether the Troubled Asset Relief Program (TARP) program would win congressional approval.

“The TED spread was about 10 times greater at the worst point of the financial crisis than it was in [early] 2007,” said Faucher.

Nod to the administration

The economy also is getting a boost from the massive federal stimulus package approved a little over a year go, emphasized the economist. In the fourth quarter of 2009, GDP grew at almost a 6% annualized rate.

“We estimate that the stimulus package, the tax cuts, the extended unemployment insurance benefits, the aid to state and local governments, the infrastructure spending all taken together added about two percentage points of growth to the economy in the fourth quarter,” said Faucher.

In another words, about one-third of the economic growth that the U.S. economy experienced in the fourth quarter of 2009 came from the stimulus package.

In the third quarter of 2009, the U.S. economy grew at about a 3% annualized rate, with the stimulus also serving as the catalyst, according to Faucher. “We think if Congress hadn’t passed that stimulus, the recession would have extended into the fall of 2009, instead of ending in August.

While the stimulus package has been a big plus for economic growth, its impact is going to shrink in the quarters ahead, emphasized Faucher. “In fact the stimulus is going to be a drag by the time we get into 2011.”