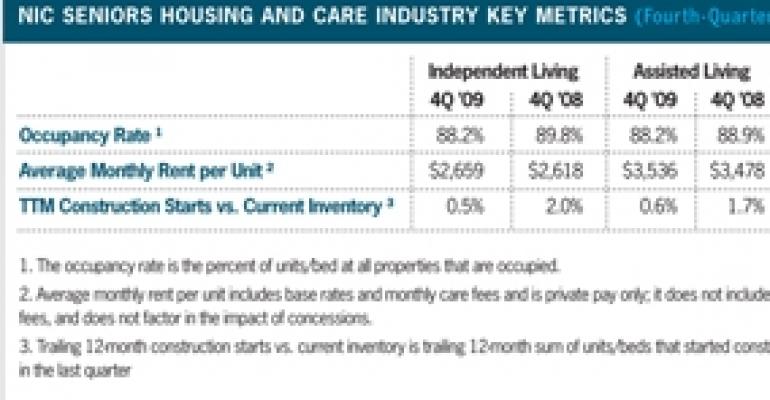 Is the seniors housing market stabilizing? The latest data offers conflicting signals as occupancies continue to decline but rents cling to slightly positive gains, according to newly released data from the National Investment Center for the Seniors Housing & Care Industry (NIC).

Construction activity continues to slow, which could mean higher occupancies ahead. Still, it may take several more quarters to burn off excess inventory. And a big supply of new buildings in some major metros could be a drag on those markets for the remainder of the year.

Occupancies at seniors housing properties had mostly been falling since the first quarter of 2007. But occupancies turned up unexpectedly in the third quarter of 2009, hitting 88.5% across the top 31 markets tracked by NIC and raising hopes that a recovery was under way. Then occupancies fell again in the fourth quarter to 88.2%, according to the latest NIC report.

All property types suffered an occupancy decline in the fourth quarter. Occupancies at independent living buildings fell to 88.2% compared with 88.5% in the third quarter. Assisted living occupancies fell by 10 basis points to 88.2%. Nursing homes saw the biggest fourth-quarter decline to 88.7% from 89.1% in the previous quarter.

The occupancy dip came with a slowdown in demand. Some 950 units were absorbed in the quarter, about average for the sector. But in the third quarter, 3,978 units were absorbed. “That’s huge,” says Hargrave. The big number could be due to pent-up demand from seniors who no longer could put off a move, he adds. But that doesn’t explain why demand dropped in the fourth quarter and, Hargrave says, it’s up for debate how strong demand will be in the months ahead.

The construction pipeline is emptying, however, which should help boost occupancies going forward. There are about 8,700 new units under way, equal to about 1.8% of the existing inventory. By comparison, in the first quarter of 2008, there were 20,000 units under way or 4.2% of the existing inventory. “Supply will not be as much of a challenge this year as it was in the last few years,” says Hargrave.

But some markets will struggle with too much seniors housing, including Denver, Atlanta, Dallas, Boston and Portland, Ore. Developers typically target cities with high population growth rates and few barriers to entry.

In Denver, the percentage of new construction to existing inventory hit a high of 31.7% in the first quarter of 2008. Denver’s current occupancy rate at independent living buildings is 83.5%. Markets with a lot of new construction may not hit bottom until the third or fourth quarter. “It’s clear that some markets are under more stress,” says Hargrave.

About 47% of building operators did not raise rents in the fourth quarter, but asking rents overall are up slightly. Year-over-year asking rents at independent buildings rose 1.6% to $2,659 a month. Assisted living rents are up 1.7% to $3,536. Nursing home rents rose 3.0% to an average of $7,830 a month. “The good news is that rents are growing,” says Hargrave.

According to a third-quarter 2009 report by the National Council of Real Estate Investment Fiduciaries (NCREIF), its database of seniors housing properties has outperformed the NCREIF Property Index (NPI) of all property types both for income and appreciation for more than five years. The total return for seniors housing over the last six years is 14.43% compared with 7.18% for the NPI.

Seniors housing has been resilient during the recession because older people who need help often must move into a building with services, notes Hargrave. “Seniors housing could turn out to be a defensive investment in tough times.”