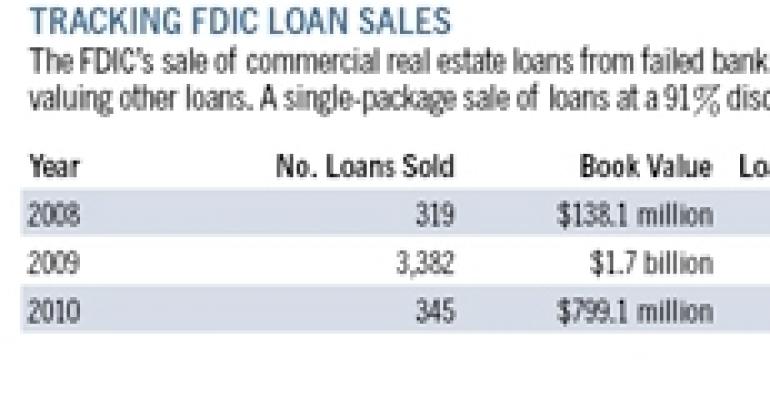 After the onset of a global financial crisis that crippled the mortgage-backed lending business, the Federal Deposit Insurance Corp. (FDIC) made a big splash by successfully selling what many called “toxic debt” into the open market.

The sale of toxic real estate debt by the FDIC began in earnest in September 2009. These poorly underwritten loans were originated — and in some cases securitized — between 2005 and 2008.

Since then the bank insurance fund has set the pace for loan sale activity and establishing price points. The FDIC’s single-package sale at a stunning 91% discount in 2010 has been the only anomaly to date.

The FDIC has taken control of more than 380 banks and has sold more than $2.6 billion of individual or pooled commercial real estate loans since 2008.

Now industry experts are looking at prices the agency fetches to determine just how their own loans should be valued. Traders also are looking to the FDIC’s sales of partial interests in the giant insurer’s portfolios to price new conduit loans and CMBS 2.0 bonds.

The first public-private investment transaction hit loan trading desks about a year ago. Traders scrutinized details of the deal for months. Colony Capital and investment partner Cogsville Group eventually paid the FDIC 59% of par value for two mixed pools. Half the loans were current, and half were delinquent.

The market believed then that delinquent commercial real estate loans were worth about 40% of par value and that loans current on payments were worth 80% of par value. That price point has held steady, and is reflected in published prices from traders like DebtX, a clearinghouse for many private loan sales.

Since the FDIC began selling loans, prices have rarely traded below those levels and liquidity has returned. This rebound has even driven investors to venture back into the business of unsecured financing.

A mezzanine loan from First Potomac Realty Trust was included in the structured deal to minimize leverage of the asset while providing maximum proceeds.

Opportunistic funds, managers that make or buy high-risk loans such as mezzanine loans and distressed debt, generated an average return of 24.3% to their investors in 2010, according to the National Council of Real Estate Investment Fiduciaries and the Townsend Group.

In the first quarter of 2011, Blackstone Group’s earnings jumped 58% over the same period in 2010. It was Blackstone’s best quarterly earnings since going public in 2007. Surprisingly, its big profits for the period came not from its traditional leveraged buyout business, but rather from its real estate division.

According to Blackstone, the traditional leveraged buyout business currently isn’t as attractive as the real estate business. Real estate is among the areas the firm is vigorously pursuing.

Blackstone recently teamed up with Square Mile Capital Management to acquire a $385 million portfolio of first-mortgage loans from the FDIC that were originated by the failed Silverton Bank in Atlanta and secured by 45 hotels.

Analysts said the Blackstone and its partner paid about 80 cents on the dollar for the portfolio, a figure strikingly close to what performing loans fetched in the FDIC’s first sale transaction after the financial meltdown. In this case, however, Square Mile and Blackstone bought the entire loan portfolio rather than a 40% or 50% stake that was more typical of earlier FDIC transactions.

What is sparking this wave of optimism among investors? The most recent commercial real estate delinquency report on collateralized debt obligations from Fitch Ratings offers some insight.

Fitch reported that mezzanine loan payoffs contributed to a decline in CDO delinquencies for the month of March, with a drop of 50 basis points in its index to 14.1% from 14.6% in February. The rating agency credited the drop in large part to two defaulted mezzanine loans being paid off as part of a larger debt restructuring package.
Ironically, the very lending structure that led to froth in real estate in the first place — unsecured supplemental financing — may at least be at the core of this leg of the recovery.