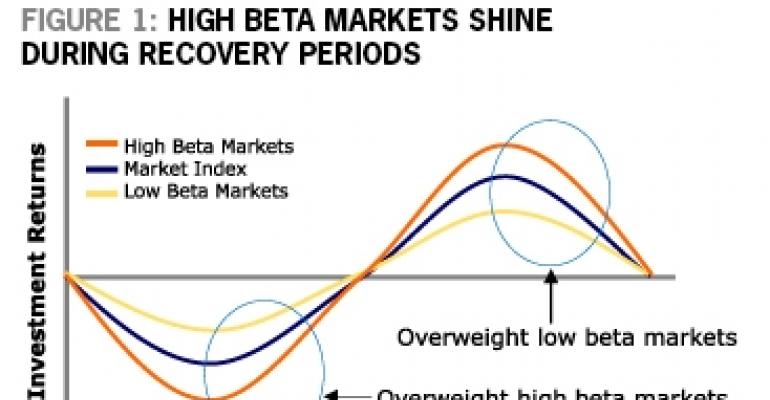 Where Should Investors Place Their Real Estate Bets in 2011?

To capture the market trough, investors began to return to commercial real estate. Well-leased, cash-flow-generating assets in primary markets were particularly in demand.

The average capitalization rate per transaction for all properties more than $5 million declined 30 basis points to 7.4% during 2010. The NCREIF Property Index (NPI) reported a strong total return of 13.1% for 2010, rebounding from a dismal negative return of 16.8% in 2009.

Based on brokerage pipelines, we expect to see many more transactions over the next several months as lenders begin to put their assets on the market and investors feel more comfortable about the improving fundamentals of the property market.

We believe that we are in the early stage of the next real estate up cycle. In 2010, the global search for yield put rapid downward movement on the cap rates of institutional-quality properties in primary markets.

With improving fundamentals, we believe that the commercial real estate market will attract significantly more investor interest and new capital in 2011.

Historically, the different property sectors exhibit different behaviors during expansion and contraction cycles. During contraction periods, the better-performing sectors have been retail, apartment, and to a lesser extent industrial. Office and hotels tend to perform poorly during the down cycle.

Conversely, during periods of expansion, office, hotel, and to a lesser extent industrial, tend to be better-performing sectors, while apartment and retail generally lag.

In anticipation of the coming real estate recovery, we believe that a portfolio that is overweighted in high-beta sectors and markets is likely to outperform the benchmark NPI index over the next few years.

An investment strategy focused on beta would seek higher returns by timing the real estate market cycle and taking on calculated market risk, with the goal of outperforming the market benchmark NPI index [Figure 1]. The strategy requires a thorough understanding of market fundamentals and an estimate of future market performance.

We believe the market environment over the next 24 months may present a favorable time to acquire quality assets at a discount to replacement cost and below historic valuations, which will result in attractive risk-adjusted returns.

Purchasing near the bottom of this cycle should position new investments to capture strong income and appreciation returns during the recovery phase, exceeding historic averages.

As capital markets continue to improve and become increasingly attractive for real estate financing, we expect primary markets and several selected high-growth secondary markets to outperform during the next cycle. In particular, we prefer high-growth, supply-constrained primary markets in coastal areas, including:

These markets have well-established large economies with vital economic drivers. They are concentrated with financial and professional services and technology-related industries and Fortune 500 companies.

Economic forecasts suggest that these metros will experience relatively strong job and population growth in absolute terms over the next few years. These markets have attracted talented and highly educated workers. As a result, the average incomes are much higher compared with the rest of the country.

In addition, these coastal cities tend to be 24-hour international gateway cities, offering cultural diversity and serving key connections with the rest of the world. International visitors and foreign purchasing of U.S. goods and real estate are fairly common in these cities, fuelling additional growth.

Based on our analysis, the above markets exhibit another key characteristic: They are relatively supply-constrained due to limited space and a challenging entitlement process. Because of these attractive investment qualities, these markets are relatively liquid with significant inventory of investment-grade real estate and substantial exposure by institutional investors.

Historic data suggest that these markets tend to bounce back more quickly after a recession than the rest of the country. We expect that pattern to hold in this recovery. Consequently, for core investments, we suggest that a focus on these markets at the early stage of the recovery cycle could achieve a solid return while minimizing potential risks.

In particular, we expect certain property types in these primary markets to outperform the overall NPI based on their identification as high beta markets. For example, the office sector in New York is a high beta-performing sector.

Similarly, San Jose, with its concentration in the technology industry, has shown greater volatility than the overall NPI industrial sector performance. Like the New York office market, total returns in the San Jose industrial market were much lower than the NPI industrial sub-index during the last two downturns, but significantly higher during the upturn.