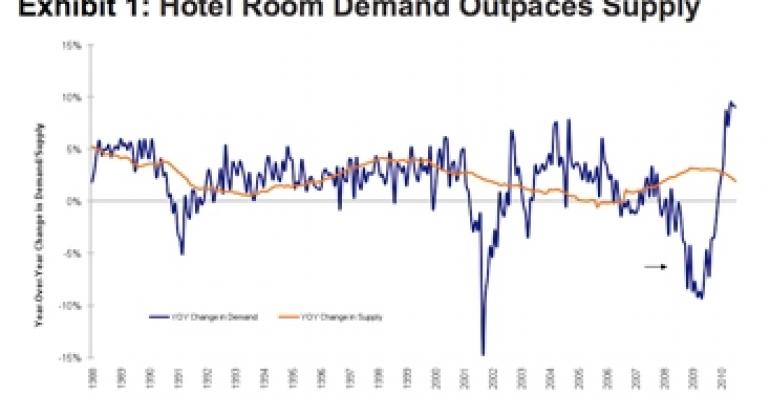 Why the U.S. Hotel Market Is Poised for Recovery

The U.S. hotel industry has emerged from one of the worst downturns in its history, and we believe the lodging sector is entering a strong cyclical recovery as demand growth accelerates.

We expect occupancy rates to continue to rise steadily as the economic recovery gains additional strength. Hotel operators have begun raising their average daily rate and should be able to hike rates in 2011 as a result of the increase in demand. New acquisitions seem especially well positioned to benefit from rising asset values and the recovering capital markets.

Hotel investments are considered to be both a real estate business as well as an operating business. The hotel sector exhibits relatively greater volatility than other property types. The peaks and valleys are due primarily to short leases, as hotel rooms are essentially leased on a daily basis.

Hotel revenues have historically been highly correlated with gross domestic product (GDP). Because there are no long-term leases and hotel room rates may be adjusted quickly, hotel investments can also be an effective hedge against potential inflation.

Hotels are becoming an increasingly attractive asset class for institutional investors. The number of hotel assets in the NCREIF Property Index (NPI) has been steadily increasing from six in 1982 to 70 in the second quarter of 2010.

However, the hotel sector is still substantially underweighted in the NPI index with only $4.6 billion, or 1.9%, in market value as of Sept. 30, 2010.

Hotels can potentially be used to both enhance investment returns and reduce portfolio risk. Over the past 20 years (1990-2009), the annual total return for the hotel sector has averaged 8.4%, which is the highest among all property sectors, according to NCREIF.

From a portfolio strategy perspective, overweighting hotels in a recovery cycle may greatly enhance total returns and position portfolios to outperform the benchmark performance index (NPI). In addition, because hotels exhibit a relatively low correlation to other property types, they may provide diversification benefits within a real estate portfolio.

During the recession of 2008 and 2009, U.S. hotel demand collapsed as businesses significantly reduced corporate travel and consumers sharply curtailed leisure travel. As the economy recovers, demand for hotel rooms is rebounding. The return of business travel, in particular, has fueled the recovery for business-oriented hotels.

Demand growth has surpassed supply growth since February 2010, and this divergence is expected to continue over the next few years. Since May 2010, monthly demand for U.S. hotel rooms has risen by 9% or more, with the strongest growth in the luxury, upper upscale and upscale hotel classes, according to NCREIF and Smith Travel Research.

That’s the highest growth rate in the industry during the past 20 years. With the increase in demand, hotels are gaining pricing power, especially during the mid-week period. As a result, the average daily rate, which was under pressure through the first half of 2010, has been rising steadily since June.

Historically, hotel supply responds rather slowly to changes in demand. When demand hits a bottom, supply will trend down four to five years later.

The increase in new hotel supply in 2008 and 2009 contributed to the woes of hotel revenues during the recession. After a 3% year-over-year increase in new supply in 2009, the supply pipeline has been on a sharp decline due to the downturn in hotel fundamentals and the difficult lending environment.

As the global economy recovers, travel and tourism are on the rebound. Because of the global recession, the total number of international visitors to the United States declined by approximately 15% in 2009. While that decrease was sharp, the number of visitors was still roughly 25% higher than in 2004.

According to the U.S. Office of Travel and Tourism Industries, the total number of international visitors to the U.S. rose by approximately 8% through the first half of 2010. As global growth strengthens, international tourism as well as business travel should continue to expand over the next few years, boosting demand for U.S. hotel rooms, especially in international gateway cities.

Hotel financing has improved considerably over the past year with both mortgage rates coming down and loan-to-values going up. Despite the recent spike in mortgage rates in December, rates are still well below where they started 2010.

Even non-recourse loans are returning after a two-year absence in the marketplace. Hotel loans are being considered for new commercial mortgage-backed securities, which suggests a better financing environment ahead. Recognizing the improving fundamentals, investors are increasingly enthusiastic about the outlook of the U.S. hotel market.

Hotel transaction volume for transactions valued at $5 million and above totaled $12.1 billion through November 2010, more than four times the volume during the same period in 2009. According to Real Capital Analytics, the increase in transaction activity has primarily occurred in full-service hotels since these assets are generally considered to be of institutional quality.

Investors have been able to secure attractive financing to complete transactions. Market data suggests that the average capitalization rate — the initial return to an investor based on the purchase price and net operating income in place — have begun trending downward in recent transactions of high-quality assets in anticipation of improving fundamentals.

Based upon ING Clarion’s market observations and industry surveys, hotel values have declined by as much as 60% during this downturn, depending on asset quality and location. We believe that we are at the early stage of the next upturn in the real estate cycle.

Occupancy and average daily rate should recover as the economy improves over the next few years, suggesting that now may be a great opportunity to buy. In general, we prefer high-quality hotel assets in relatively supply-constrained urban locations that are attractive to business travelers.