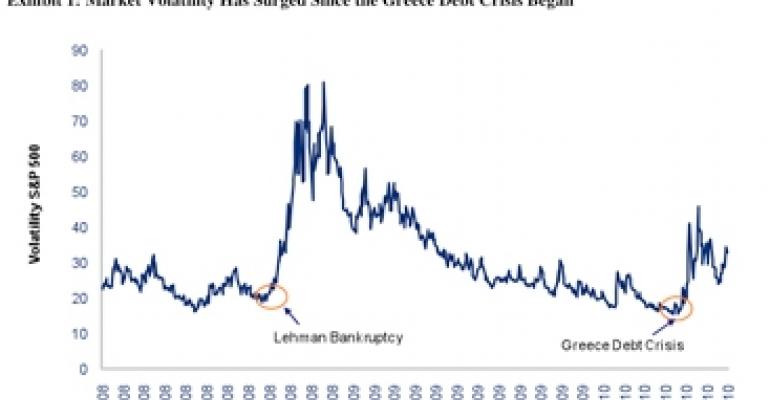 Since mid-April, fears of a European sovereign debt crisis have sent another round of shockwaves through the global financial system. Bond yields and credit default swaps for countries with increasing default risk, including Greece, Italy, Spain, Hungary, and Portugal, have widened significantly.

Investor confidence, meanwhile, clearly has been shaken. The Dow Jones Industrial Average declined by more than 20% from June 21 through July 2.

On May 9, in an emergency meeting, European Union (EU) finance ministers approved a rescue package that will provide a nearly $1 trillion bailout package for the few weaker EU members to ensure financial stability across the EU zone. At the same time, several EU countries have proposed or approved severe austerity measures aimed at reducing debt levels.

Many economists are worried that Europe could fall into a double-dip recession. At a minimum, most economists believe that economic growth in the EU zone is likely to be weak over the next few years.

Unlike the subprime mortgage fallout, the credit exposure of U.S. financial institutions in this crisis is relatively small, with only an estimated $165.9 billion direct sovereign debt exposure in the implicated countries. While more difficult to quantify, there were an estimated $4.6 trillion in subprime and Alt-A mortgages outstanding in June 2008, with a significant portion held by US institutions.

Beyond those direct financial implications, however, we believe that the European debt crisis may affect the U.S. economy and commercial real estate investment on several fronts.

The daily headlines about new budget issues, demonstrations, and even riots have certainly led investors to become more cautious. Market volatility surged to the highest level since the Lehman Brothers bankruptcy in September 2008 [Exhibit 1].

More importantly, the crisis could affect consumer spending as well as business decisions. U.S. retail sales in May dropped 1.2%, the largest decline over the past eight months.

In the same month, the U.S. private sector created only 41,000 jobs, a dramatic scale back from 218,000 in April and the fewest since January.

It is possible that concerns related to the EU are making some firms more risk-averse today, taking a wait-and-see approach. Should the crisis deepen, we believe it is likely that Greece could be forced to leave the EU.

Under both political and financial turmoil, there is also the remote possibility of a breakup of the EU altogether. These scenarios could cause severe psychological setbacks in investor confidence.

After the Federal Reserve announced that it would stop its quantitative easing program, the 10-year Treasury yield rose to 4% in early April, reflecting expectations of rising interest rates [Exhibit 2]. Then, Greece’s financial situation worsened rapidly and its debt was downgraded to junk status.

The flight to safety and quality has driven the U.S. 10-year Treasury yield down sharply, dropping below 3% in recent days. Lower interest rates are positive to both residential and commercial real estate as lending should be less expensive.

Indeed, the 30-year fixed residential mortgage rate hit 4.58% during the first week of July, the lowest rate since Freddie Mac began tracking the rate in 1971. While these low rates reflect the fragility of the economic recovery, they may offer some potential benefits for property investors.

Falling mortgage rates might allow investors to more easily refinance their commercial real estate investment, potentially leading to fewer distressed assets in the marketplace. Amid these various concerns, we believe the Federal Reserve is likely to postpone raising interest rates from late 2010 to mid-2011.

The euro has depreciated by approximately 18% against the U.S. dollar since the beginning of 2010, with most of the decline occurring over the past two months. This trend is significant because the EU is the largest economy in the world and generates an annual gross domestic product (GDP) of $16.2 trillion compared with $14.2 trillion GDP in the U.S.

The falling value of the euro will influence trade flows between the two largest economies, especially for exports. The EU share of total U.S. exports is about 20%. Rising exports have been one of the driving forces so far in the ongoing U.S. economic recovery.

We believe that going forward European demand for U.S. products and services will slow as U.S. goods become more expensive for European consumers. Budget cuts by EU countries will further reduce spending. In addition, there will be fewer travelers from Europe heading for U.S. destinations.

Although weakened U.S. exports could slow hiring and production output, this trend will not likely cause major damage to the U.S. economic recovery, as U.S. exports to the EU account for only 3% of total U.S. GDP.

In 2009, the average debt-to-GDP ratio for EU countries was 84%, with Greece having the highest ratio among the 16 members. Ironically, more than half of these countries exceeded the required limit established by the EU of a 60% debt-to-GDP ratio, with a few by a large margin.

Two years of severe recession have helped push Greece to the verge of default, and a few other countries face mounting pressure. On June 7, the German government made a swift decision to cut $12 billion a year in the federal budget and opened the door for further spending reductions.

Another strong EU member, France, has vowed to follow suit. This is a dramatic shift from “government is the solution” to “government is part of the problem”.

This shift also reflects the ongoing dialogue in U.S. policy, with the two sides arguing between the benefits of additional government stimulus and the need to shift focus to deficit and debt reduction.

The current U.S. debt-to-GDP ratio is close to 90%, a level that is increasingly alarming. While we believe that government stimulus has been a critical tool in our economic recovery, the risk of a continued rise in national debt is significant.

This coming November election will fuel more public debate about our swelling budget deficits and could potentially lead to major changes in fiscal policy going forward.

Fortunately, economic activity has gained some momentum in the U.S. over the past several months. Although risk levels have elevated lately, we do not believe that this crisis will derail the economic recovery and lead to another downturn in the near term.

In fact, over the next few years we believe the global economic growth will likely be driven by Asia (except for Japan), the U.S., and parts of Latin America.

As a result, we expect more capital to flow to the U.S., especially from Asia and the Middle East. This is welcome news for U.S. investments, including the commercial real estate sector.