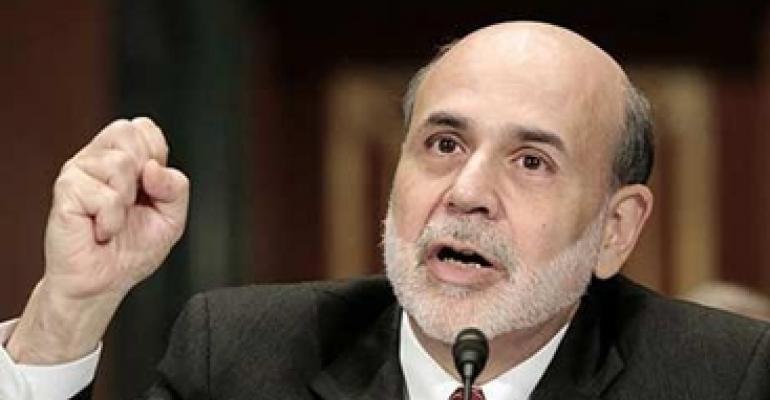 The threat of an imminent rise in interest and capitalization rates abated Tuesday, courtesy of the Federal Reserve’s plan to suppress short-term interest rates for the next two years. The measure helps to stabilize the economic outlook, but observers warn commercial real estate investors to be prepared in case capital costs rise despite the Fed’s efforts.

“The Federal Open Market Committee (FOMC) has provided some buoyancy for asset values,” says Sam Chandan, president and chief economist at New York-based Chandan Economics. “While the impact of easing is most readily observable in stock market volatility, low short- and long-term interest rates also relieve some of the upward pressure on cap rates and mortgage financing costs.”

The FOMC meets several times a year to take action aimed at keeping the economy on track, chiefly by manipulating the federal funds rate. Banks use the fed funds rate in overnight lending, and it is an important benchmark that influences short-, mid- and long-term interest rates.

Generally, the FOMC lowers the federal funds rate to stimulate borrowing and boost the economy. When growth becomes overheated, the committee raises its rate to dampen borrowing, slow the economy, and fight inflation.

On Tuesday, the FOMC made an uncharacteristically long-term policy commitment by making clear that it expects to keep the federal funds rate between zero and 0.25% until mid-2013. But it was not a unanimous decision. The panel adopted its statement in a 7-3 vote. The three dissenters were hesitant to commit to such a lengthy period of low interest rates.

The dissenters would have preferred to word the Fed’s decision as “likely to warrant exceptionally low levels for the federal funds rate for an extended period,” the Fed stated in a news release.

Prior to the Fed’s announcement, Chandan and other forecasters were predicting a gradual increase in interest rates and borrowing costs that would force sellers to lower the price of real estate assets, weighing down all commercial property values in the process.

Those concerns were amplified Aug. 5, when rating agency Standard & Poor’s downgraded U.S. government debt from AAA to AA+, a move that may force benchmark Treasury yields up over time.

Yields on 10-year Treasuries plunged to an all-time low of 2.04% on Tuesday following the Fed’s announcement, however, before recovering to close at 2.19%.

The Fed’s surprise move tempers inflation expectations, even though market forces could still drive up interest rates, according to Victor Calanog, chief economist at real estate research firm Reis. Prior to Tuesday, most forecasters had expected the Fed to begin raising interest rates by mid-2012, if not sooner, he says.

“Short of going into another large-scale bond-buying program, this is perhaps the best move the Fed could make to encourage economic stabilization,” says Calanog. “If the Fed keeps policy interest rates low, that means less pressure for cap rates to climb in response to higher risk-free rates.”

Commercial real estate finance veteran William Hughes expresses greater confidence in the Fed’s outlook. “The fact that the government is talking in terms of 2013 indicates that there is very little fear of inflation,” says Hughes, who is senior vice president and managing director at Marcus & Millichap Capital Corp. “Without the cost of inflation, nothing is going to drive longer-term rates up.”

The Fed’s message that interest rates will remain stable for some time bodes well for property investors, contends Hughes. Economic realities of job creation, manufacturing output and consumer confidence will drive real estate fundamentals, he acknowledges, but other forces may drive capital to the sector.

“The recent volatility in the stock market will ultimately drive dollars into more secure investments, such as commercial real estate,” he says. “With property fundamentals improving and stability assured, we are going to see more investors putting their money into the commercial real estate arena, which will further solidify values.”

And, says Hughes, lower prices at the gas pump will soon boost consumer spending, which is good for property fundamentals. Oil prices for September delivery fell $2.01 to $79.30 per barrel on the New York Mercantile Exchange, the lowest price since Sept. 29, following the Fed’s announcement. Futures have fallen 17% so far this month and are down 13% since the beginning of the year.

“There is nothing that the Fed has come out with that would tend to be a negative on the commercial real estate arena,” Hughes concludes. “It is all positive.”

It is important to remember why the Fed made such a bold move. In its statement, FOMC members cited slower-than-expected economic growth, which suggested deteriorating employment conditions, flat household spending, weak investment in non-residential construction and a depressed housing market. While the Fed’s action may smooth the path, the economy hasn’t climbed out of the valley.

Low borrowing costs will indeed support transaction activity, says Calanog, but the Fed’s decision increases the risk that buyers will overpay for some properties, particularly in the top primary markets.

“Small asset bubbles have begun to appear in low cap rate trades, particularly for trophy assets in gateway cities. A low interest rate environment will just encourage more of this,” points out Calanog. “Still, this is one of the few remaining strategies the Fed has in order to stimulate the economy, and this latest move drastically diminishes the risk of premature tightening, at least from a monetary standpoint.”

Plenty of challenges remain for the industry and nation as a whole, Calanog notes. For one, Washington still has to make budget and reduce the nation’s debt burden without choking off economic growth.

Perhaps more worrisome, the Fed’s low interest rate policy may enable some banks to avoid realizing losses on bad loans, leaving lenders saddled with problem debt that prolongs the current, constrained lending environment. “But many of the biggest banks have written off, or made allowances, for bad debt and want to move forward,” he says.

Chandan advises investors to be prepared for higher capital costs, just in case. “It is critical for investors and lenders to consider where prices might be if monetary policy was neutral, and where [prices] will trend if policy tightens ahead of growth, as would be the case if inflationary pressures pick up.”

“We still need to see underlying fundamentals strengthen, principally in the form of absorption-driving job growth,” says Chandan. “A major risk of current monetary policy is that myopic buyers and lenders will not account for the likelihood of higher baseline rates in valuing their exit or refinancing terms.”