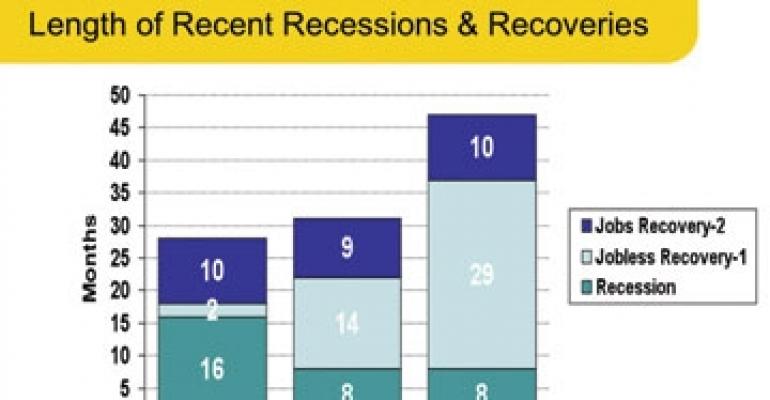 Will It Be a Jobless Recovery for the U.S. Economy Once Again?

“When will it end?” That’s the oft-repeated question Bob Bach, chief economist for Grubb & Ellis, is fielding from commercial real estate owners and investors across the country. “They are in a lot of pain right now,” says Bach. “They want to know, ‘When is it going to go away?’”

The short answer is not this year. With net operating income across the property sectors falling due to rising vacancies, loan delinquencies continue to climb sharply. The delinquent unpaid balance for commercial mortgage-backed securities (CMBS) rose by $9.87 billion in June to a trailing 12-month high of $28.65 billion, according to Realpoint. The Horsham, Pa.-based credit rating agency has been tracking CMBS delinquencies since 2001.

The spike in the delinquent unpaid balance for CMBS in June was 52% higher than in May, and it marked the 10th straight monthly increase. The problem is expected to only worsen well into early next year amid soft demand for commercial real estate space.

The good news is that real gross domestic product (GDP) — the output of goods and services in the U.S. — is expected to turn positive in the second half of this year after shrinking for four consecutive quarters. The Bureau of Economic Research reports that real GDP contracted 1% on an annualized basis in the second quarter, a dramatic improvement over the 6.4% contraction in the first quarter.

“I’m vastly more encouraged because four months ago the issue of another depression, or a really bad recession worse than we’ve seen, was still on the table,” recalls Bach. “There was massive uncertainty out there. In the last four months, a number of indicators suggest that’s not going to happen. In fact, the recession is winding down.”

But pinpointing the timeline for recovery in commercial real estate is educated guesswork at best because so much depends on the strength of the U.S. economic recovery. “Will it be another jobless recovery, and if so for how long?” That’s the big question, says Bach. Since December 2007, payroll employment has fallen by 6.7 million, according to U.S. Bureau of Labor Statistics.

Genesis of an economic phrase

The term “jobless recovery” came into use after the 1990-1991 recession, Bach explains, to describe a situation in which GDP was not growing fast enough to encourage businesses to hire. Total payroll employment languished after that recession ended, failing to rise above its end-of-recession levels for another 14 months. Employment did not surpass its pre-recession peak for an additional nine months (see chart).

The jobless recovery lasted even longer following the 2001 recession, with employment failing to rise above its end-of-recession level for 29 months. It took an additional 10 months before employment rose above its pre-recession peak (see chart).

“If we get a 29-month jobless period following the end of this recession, the pain is going to be extended for commercial real estate,” says Bach.

What are the causes of a jobless recovery? Economists cite productivity increases, offshoring of jobs and a weaker manufacturing sector as possible explanations.

The prospects for a slow recovery this time around are strong, says Bach. “If recent history is any indication, commercial real estate leasing conditions will be moribund for at least the next year and probably longer, particularly given the risk-averse credit markets.”

There could be a surprise to the upside on the labor front, however. One defining characteristic of the current recession is the swiftness with which employers cut inventories and payrolls beginning last September when Lehman Brothers collapsed and the credit markets shut down.

“Labor productivity remains unusually strong for a recession, and second-quarter profits were surprisingly resilient,” says Bach. “This raises the possibility that even a modest increase in demand could prompt employers to resume hiring, which would shorten the jobless recovery and hasten a true labor market recovery — a hopeful outcome for commercial real estate.”

No one disputes that steady job growth is critical if commercial real estate hopes to get off the mat. Hessam Nadji, managing director of research services for Marcus & Millichap, says that it will take two quarters of job growth before net absorption of space occurs. At the moment, however, employers are still shedding jobs. Nonfarm payroll employment fell 247,000 in July. “It’s easily a nine- to 12-month gap between the economy turning, jobs being created and space being [in demand].”

The second quarter of 2010 will likely be the first healthy growth in GDP of 2% to 3%, predicts Nadji, and will coincide with companies becoming more confident about the direction of the economy.

“They’ll want to take advantage of incredibly low rents, very high vacancies and lots of space options,” says the veteran researcher. “We may be in for a surprise to the upside of how much leasing activity will occur starting in the second half of 2010 as companies come out of the woodwork to take advantage of the marketplace.”

Another drag on the industry is that the lending climate for commercial real estate remains seriously problematic. The CMBS market is still shut down and commercial banks are in no shape, or mood, to aggressively lend. “The two major funding sources for the industry are seriously hampered,” admits Nadji.

All eyes in the commercial real estate finance world are now focused on Developers Diversified Realty and Vornado Realty Trust, which plan to raise up to $700 million and $550 million in CMBS financing, respectively, through the government-sponsored Term Asset-Backed Securities Loan Facility (TALF) program.

“Those deals, once they go through in the fall, will signal the return of the securitization market to the best-quality assets and best-quality net operating incomes,” says Nadji. “It’s a very limited signal. It’s not going to affect the broad commercial real estate market, especially assets averaging $10 million to $20 million in value, which make up most of the market. But it’s a start.”

One increasingly positive signal is that commercial banks are posting large profits once again. That’s primarily because of the wide spread between banks’ low cost of borrowing funds and the interest rates they’re charging on loans.

“The velocity of capital is still very limited,” says Nadji. “[The banks] still have a ton of discounted assets on their books that have to be dealt with. The banking problem has not been solved yet, but because they are profitable again it is helping to offset a lot of the pressure coming from bad loans and distressed assets on their books.”

In light of the improved financial outlook for major banks, combined with the tailwind of an improving economy and the effects of the $787 billion stimulus package that has yet to fully kick in, Nadji anticipates financing for commercial real estate will become more widely available at the end of 2009 or early 2010.

“By mid-2010, you could see a situation where the securitization market slowly starts to come back for core commercial real estate,” says Nadji. “But as far as when financing will reach a normalized status, I think that we’re looking at another nine to 12 months. It will be incremental improvement until that time.”