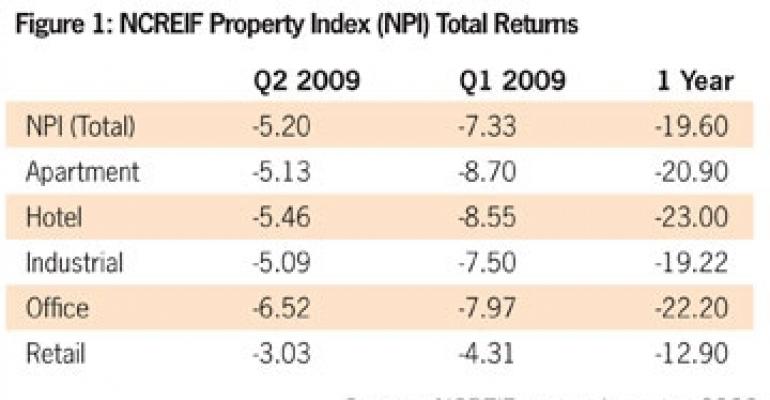 Is the Worst Behind Us?

Despite some signs of stabilization, the second quarter was another difficult one for U.S. commercial real estate. Total returns for the NCREIF Property Index (NPI) — a widely used investment performance benchmark for institutional-quality real estate assets published by the National Council of Real Estate Investment Fiduciaries— declined 5.2% in the second quarter after dipping 7.3% in the first quarter.

Retail was the best performing sector over the past quarter, benefitting from relatively strong income growth and a smaller capital decline than other sectors. The office sector was the worst performer as it struggled with a sharp drop in occupancy, steep rent declines, and considerable decompression in the capitalization rate [Figure 1].

Over the past year, the hotel sector has been the weakest performer. The total returns for all sectors did show improvement over the previous quarter, however, suggesting that value adjustments may be moderating.

Another commonly used performance benchmark is the NFI-ODCE Index, also published by the National Council of Real Estate Investment Fiduciaries, which tracks the performance of 14 open-ended core real estate funds in the U.S., gross of fees. The market capitalization of the index totaled $54.3 billion as of June 30, 2009.

In a down market like today, leverage typically has a negative impact on investment returns. Indeed, after tracking the NPI returns closely from 2007 through the third quarter of 2008, there has been a sharp divergence between the two indices as the economy has deteriorated [Figure 2].

Total returns for the NFI-ODCE for the first and second quarters of 2009 were minus 13.7% and minus 9%, respectively, substantially worse than the total returns of the NPI. Like the NPI, declines in the second quarter were less than in the first quarter.

According to Real Capital Analytics, national transaction volume across all five property sectors totaled just $9.1 billion in the second quarter of this year, down from $9.7 billion in the first quarter, suggesting that the real estate transaction market may not have bottomed yet. Bid-ask spreads remain wide in most markets as buyers and sellers disagree on property valuations.

Furthermore, the lack of available financing is hindering potential transactions. Even so, we are encouraged to see that investors showed more interest in the multifamily and industrial sectors.

Transaction volume for both sectors in the second quarter was substantially higher than in the first quarter, although still down significantly from the same period a year ago.

On the other hand, hotel and office transaction volume is down drastically, indicating that investors continue to shy away from these two sectors for now, likely because of deteriorating fundamentals and difficulty in financing.

We believe that many investors are on the sidelines, choosing a wait-and-see approach. As both the real estate capital markets and job market improve over the next few quarters, we believe that private capital will start to flow back into commercial real estate.

This year appears to be on track to become the worst year on record for real estate investment returns, as measured by the NPI. We believe that the mounting maturing commercial real estate debt is the top challenge facing our industry.

With declining net operating income, tightened underwriting standards, and limited attractive financing, we expect that commercial real estate values will continue to decline, albeit at a slower pace, over the next few quarters.

Should the current hints of economic stabilization take hold, we believe that the return of financing could provide the spark necessary to help reverse the downward trend in commercial real estate.

The expansion of the Term Asset-Backed Securities Loan Facility (TALF) program to include commercial real estate could, therefore, be particularly significant.

Many market observers are expecting to see new CMBS issuance before the end of the year through the program, and a variety of major real estate players are evaluating opportunities to participate in the program.

The Federal Reserve and the Treasury Department are evaluating whether to extend the program to beyond 2009, or even expand its current reach. We will keep a close eye on this issue, as it could be key to determining when real estate values will begin to climb again.