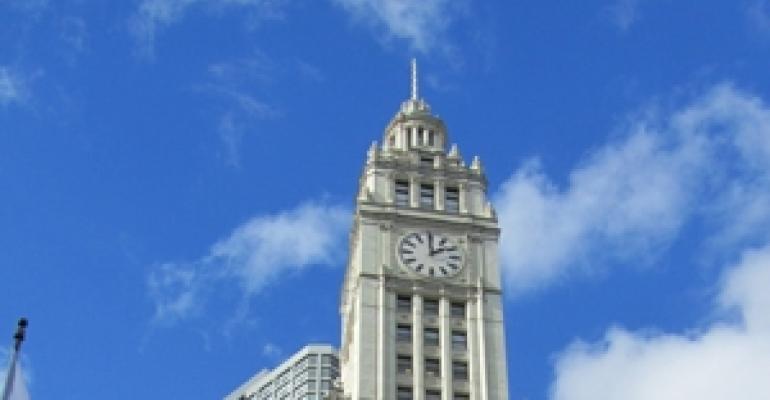 A consortium’s acquisition of the Wrigley Building earlier this week is just the latest trade involving an iconic Chicago asset and demonstrates that the city’s downtown office buildings remain hot assets for investors.

In the deal, which Chicago brokers estimate was worth $40 million, BDT Capital Partners, Zeller Realty Group and Groupon co-founders Brad Keywell and Eric Lefkofsky acquired the building from the Wm. Wrigley Jr. Co. The group plans to revitalize the 460,000-square-foot property and conduct a renovation. The group will make improvements to the plaza near the building and optimize the existing ground floor retail at the site. The Wrigley Co. will inhabit the building through the end of 2012 before relocating to its headquarters on Goose Island.

And these won’t be the last big properties to trade hands, with Willis Tower, the Chicago Board of Trade and 311 S. Wacker Drive also currently on the market.

“This is a good time to sell a big downtown building, and owners in Chicago are realizing that,” says John Przybyla, a vice president and regional manager with Marcus & Millichap Real Estate Services, noting that frustrated investors this autumn are seeking returns beyond 10-year Treasury notes yielding 2% and a stock market stuck in neutral. “There has been a flight to safety, and REITs and institutional buyers are willing to pay cap rates of 6% and more for prime buildings in quality markets like Chicago’s Loop.”

In the office sector, brokers say, it’s the best class-A buildings that are most in demand—both with tenants and investors. By one estimate, within all the downtown high-rises built in the past decade, the vacancy rate is hovering around 2% at present.

“Most of the buildings that are selling today are of institutional quality and are well leased, with limited amounts of tenant rollover in the near term,” says Joseph Learner, an executive vice-president with Studley.

He notes that the $369 million price for Three First National Plaza works out to $256 a square foot and is a marked jump from the $245 million that former owners, including a Hines Real Estate Investment Trust Fund, paid for the same building in 2005. Three First has a vacancy rate of just 8%.

“Three First National was built in the 1980s and has stood the test of time,” says Learner. “Other buildings from that era have grown to look tired and have required major face-lifts since. But Three First was constructed of first-class materials and has maintained a class-A ranking. That’s what institutional money wants in Chicago: stabilized buildings that can withstand the passage of time.”

Other first-rank 1980s-era towers have been selling in Chicago. In August, for instance, a Chicago-based firm, Hearn Co., agreed to pay $140 million for the 40-story 55 W. Monroe tower designed by the celebrated architect Helmut Jahn and opened in 1980. The price amounts to $170 a square foot for the 807,000-square-foot asset, a good price considering there is a 25% vacancy rate currently there.

Also in August, the Multi-Employer Property Trust agreed to buy the 45-story skyscraper at 200 W. Madison St. for an undetermined price. It was built in 1983 and is about 87% leased. The seller is a joint venture led by Tishman Speyer Properties LP, which paid $160 million, or $172 per square foot, for the 928,000-square-foot building a decade ago.

Some of the building investors have been new to Chicago. In early September it was revealed that the California firm Irvine Co. is buying a 50% stake in the UBS Tower, a 1.4-million-square-foot behemoth at 1 N. Wacker Dr., for a little over $300 million, valuing the building at $450 a square foot, or more than the $419 a foot that Irvine paid earlier in the year for the Hyatt Center, at 71 S. Wacker Dr., in a $625 million purchase.

John Dempsey, a senior vice-president at CBRE, believes that the spurt of selling activity is a holdover from the recession. “There was a lot of selling of office assets in Chicago in 2006 and 2007,” he recalls. “Then in 2008 to 2010 the market was cauterized by the bad economy. Investors who had planned exits couldn’t get out. Now these investors, who are driven by internal rates of return, are getting their money out.”

The conditions are also being bolstered by the fact that fundamentals have been improving. A report from CB Richard Ellis pegged the direct vacancy rate in Chicago’s central business district at 14.5% at mid-year, down from 15.0% a year ago (although much higher than the 10.9% vacancy rate that prevailed as recently as 2008). But in the suburbs the office vacancy is stuck at 23.1%, about the same as year-ago levels and significantly above the 2008 average of 20%.

In terms of rents, in the suburbs, gross asking rates on new class-A leases were running at $24.81 per foot, down 86 cents a foot in the past year and at the lowest point that rates have been since 2007. In downtown Chicago, by contrast, rental rates have risen four quarters in a row, with central Loop Class A buildings currently fetching $38.27 per foot on a gross basis, up from a low of $37.23 12 months earlier Downtown had 550,000 square feet of positive absorption in the second quarter, according to CBRE, the best stretch since 2008.

“It’s all about talent, and that is what is bringing companies downtown,” adds Kyle Kamin, a CBRE senior vice president. “It’s become very difficult to attract good young talent in the suburbs.” He notes that one of the fastest growing companies anywhere has been the Internet daily deal specialist Groupon Inc., which inked a 220,000-square-foot lease recently at 600 W. Chicago Ave. “Groupon is the kind of technology company that would never consider being in the suburbs. They have to be in the city,” Kamin says.