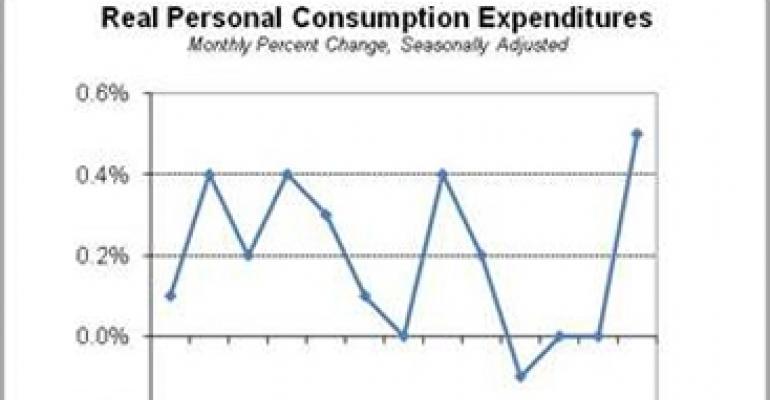 While it is impossible to sugarcoat the stagnant state of the labor market in August, Grubb & Ellis chief economist Bob Bach says that the yield curve is not signaling a recession.

The spreads between the yields on short- and long-term Treasury securities are high by historic standards, which Bach believes is an encouraging sign. Typically a flattening or negative yield curve presages a recession, and long-term inflation expectations recede, pulling long-term interest rates down with them.

Still, last Friday’s employment summary for August released by the U.S. Department of Labor felt like a kick in the gut to many Americans. The private sector added a seasonally adjusted total of 17,000 jobs in August, but that was offset by the loss of 17,000 government jobs.

The end result was no increase in non-farm payroll employment, a surprise to most analysts who had expected gains ranging from 60,000 to 80,000 jobs. Meanwhile, the national unemployment rate was unchanged at 9.1%.

Job gains by industry were most robust in education and health services (up 34,000 jobs), and professional and business services (up 28,000).

Conversely, the information sector shed 48,000 jobs, of which 45,000 were striking Verizon workers who have returned to work since the survey was conducted — “a bit of a silver lining” in Bach’s words.

Another bright spot in the report was that consumer spending spiked 0.8% in July, the strongest gain since February. Subtracting inflation, real consumer spending rose 0.5%, the best performance since December 2009.

“These numbers were inflated by the return of vehicles to dealer showrooms after supply chain disruptions from the disasters in Japan,” points out Bach. “Nevertheless, consumers are still in the game despite low confidence, anemic hiring and the never-ending housing slump. This is critical to the economy since consumer spending accounts for 70 percent of GDP.”

Some other details of the report were disappointing, including slight declines in the work week and average hourly earnings, as well as downward revisions totaling 58,000 in the June and July payroll numbers due to additional government job cuts.

“The jobs report confirms hesitation on the part of employers to expand payrolls. Blips like this are not surprising given the long slog to recovery after the last recession,” states Calanog.

Policymakers now need to walk a razor’s edge, he explains. “Any move the [Federal Reserve] makes will be subject to hazards. By confirming its belief about the daunting prospects for the economy in the near term, additional stimulus support from the Fed may affirm pessimistic fears,” states Calanog.

“On the other hand,” Calanog concludes, “if the Fed continues to do nothing it will be blamed in retrospect for standing idly before what may be the beginning of another turn in the labor market cycle.”