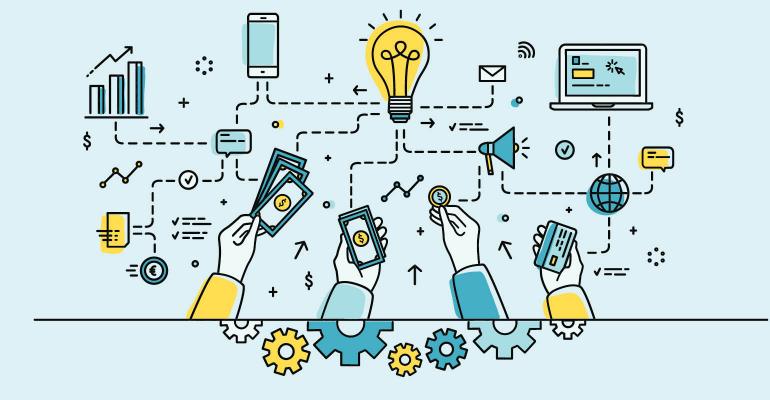 Five years after crowdfunding burst onto the commercial real estate financing scene, firms are still riding a rocket of double- and even triple-digit annual growth. Along with that growth comes continued evolution in the sector as companies reinvest in platforms and continue to hone business models.

“Early on, it was hard to differentiate who was doing what in our space, and it was hard to see which businesses were going to work and which weren’t,” says Brett Crosby, co-founder and COO at PeerStreet. The guys that really built and invested in a good tech platform and infrastructure are seeing the fruits of their labor pay off, adds Crosby. There is more separation between the strong and growing platforms and the smaller players. “I do think you are starting to see a separation in the pack, and it will be interesting to see how that continues over time,” he says.

Since it was founded in 2015, PeerStreet has funded more than $900 million in loans, mostly providing short-term bridge loans for one- to four-unit residential properties. Earlier this year, the company made a strategic move into the commercial mortgage business. Initially, PeerStreet will offer small-balance recourse loans valued at less than $5 million for multifamily properties and mixed-use properties with residential components. The company also announced in April that it had raised $29.5 million in a Series B funding that will help the company to expand.

“We have seen some fallout where people don’t have the technology or the funding to back up what they are doing,” agrees Amy Kirsch, vice president of investor services at RealtyShares. Since it was founded in 2013, RealtyShares has raised over $750 million on its platform across 1,100 different projects with investors in all 50 states.

However, RealtyShares is another firm tweaking its business model to focus on the commercial middle market space. Initially, the firm had done some residential debt and equity offerings, but has since cut that part of the business completely. “We really wanted to have laser focus on the commercial middle market space, which is our expertise,” says Kirsch. The firm provides both debt and equity for commercial property transactions with offerings that typically average about $2 million.

Crowdfunding firms have put a lot of effort into educating accredited investors on real estate crowdfunding and real estate investing in general. Those efforts are starting to pay for firms such as CrowdStreet. The firm hit a major milestone in March with more than 99,000 registered investors on its platform. CrowdStreet also is generating a high volume of repeat investors that are using crowdfunding to create diversified real estate portfolios with different sponsors, property types, geographic markets and risk profiles, notes Tore Steen, CEO, CrowdStreet.

“Except for Groundfloor, it is still an early stage game for the non-accredited investor to participate directly in these real estate loans,” says Brian Dally, co-founder and CEO of Groundfloor. Last year, Groundfloor originated $30 million in loans last year and is on pace to grow between 50 and 200 percent this year. One of the factors that will determine that growth is its own crowdfunded equity offering to raise capital that will help the company put additional infrastructure and people in place to accelerate growth.

A NREI study of on high-net worth investors' (HNWIs) commercial real estate strategies found that 11.3 percent of respondents expected HNWI allocations to include crowdfunding.

Another sign of the evolution occurring within real estate crowdfunding is that firms are succeeding in raising larger chunks of capital. Last month, RealtyShares completed its highest equity raise to date at $5.5 million. “We’re definitely seeing an increase in the raise sizes since our inception,” says Kirsch.

CrowdStreet also recorded its highest capital raise earlier this year with an offering that raised $12 million. “That is a good example of someone who could have gone to the institutional capital market, but instead went to the retail investor,” says Steen. In addition to being able to compete at an institutional level in delivering bigger financing commitments, CrowdStreet also is attracting institutions as both sponsors and customers.

The company recently worked with KBS Realty to raise capital for its KBS Growth & Income Real Estate Investment, a non-traded REIT that has a $1 billion equity goal. In October, KBS introduced its own online portal, KBS Direct that uses CrowdStreet software. And in October, the firm also put an offering on the CrowdStreet Marketplace online platform to reach additional accredited investors. That is another signal that major players are buying into the omni-channel approach of going after both institutional and retail sources of capital, adds Steen.