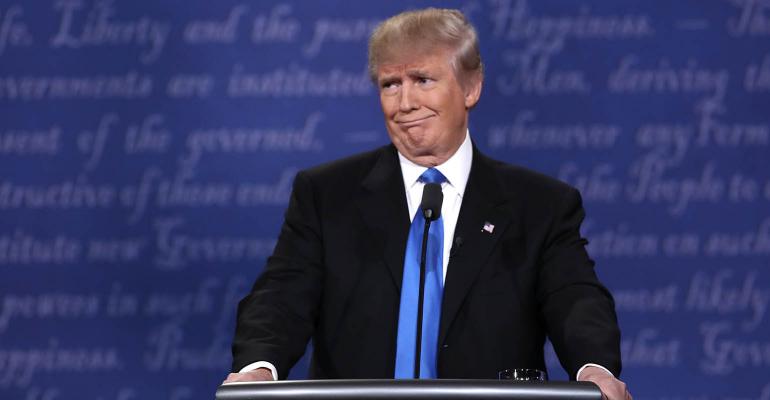 A poll of nearly 1,000 readers of NREI completed between Aug. 25 and Aug. 28 revealed that 60.4 percent of respondents disapprove of the president’s job performance.

The bad news for President Trump is that his approval ratings as measured by various polling agencies are at or near their lowest points since he took office. The worse news is that the industry he originally hailed from judges him even more harshly.

Commercial real estate insiders also felt ambivalent about Trump’s legislative agenda in terms of how it pertains to the real estate industry. Overall, 35.2 percent approved of his agenda, while 30.4 percent disapproved and 34.4 percent indicated they were neutral. (By contrast, a full 53.5 percent of NREI survey respondents disapproved of Trump’s general legislative agenda.)

The vast majority of NREI survey respondents (78.2 percent) felt that comprehensive tax reform should be the number one priority for the administration, followed by the infrastructure improvement plan (63.5 percent), healthcare reform (43.1 percent) and financial regulations reform (31.9 percent).

In open-ended responses, some readers cited balancing the budget, job growth, GSE reform and privatization, national security and climate change control as issues that should take priority. Among the more esoteric responses were calls for resignation/impeachment (16 responses) and pleas to stay off Twitter (three).

In total, 42.4 percent of respondents said they approve of the proposed changes to the Dodd-Frank regulations. On two other issues, more than half of survey respondents (54.1 percent and 51.2 percent respectively) indicated there were not enough details available on either the president’s executive orders for infrastructure improvements or potential changes to the tax code for them to gauge whether those measures would be positive or negative.

In fact, the lack of movement on the infrastructure improvement plan, something that was largely seen as an issue both Republicans and Democrats could agree on, was cited as a source of frustration by people in the industry. “He could have passed actual infrastructure legislation by now—and should have,” wrote one survey respondent. “Many in [commercial real estate] voted for him based on his business expertise related to our industry. Instead of working on low-hanging fruit like infrastructure, he's allowed his low-hanging base to dictate social policies that further divide the nation—all while demeaning the office. It's a truly lost opportunity.”

“Infrastructure spending could be important, but there is nothing to indicate he’ll be able to put the trillion-dollar package together that would move the needle for [commercial real estate],” echoed another. A third wrote that “there are a handful of policy ideas being floated that sound like they might be helpful, but who knows what it will all look like when legislated and him being a petulant man-child doesn’t give me much confidence that anything meaningful will get done. His increased infrastructure spending plan, coupled with proposed tax cuts and the associated increase in deficit spending, has had a significant impact on increasing interest rates, which has had a negative impact on most players in the [commercial real estate] space, the exceptions being non-agency lenders.”

Yet another respondent indicated he wanted the president to concentrate on his legislative agenda rather than on fighting with the media: “I wish he would start selling the tax plan, health insurance and infrastructure and quit just chasing the press…down rabbit holes they invent.”

When asked to offer their thoughts on president Trump’s overall job performance to date, a high number of respondents had negative feedback. Lack of meaningful legislation during the president’s 212 days in office was a frequent complaint, though a number of respondents blamed Congress for coming to the table unprepared to pass measures such as the healthcare bill and stalling reform. “The agenda has been severally torpedoed by the Democrats and is devoid of diligence to the task from the inept Republicans,” wrote one. The president “is doing a great job. Now Congress and the Senate need to get their act together and get something done for the president,” wrote another. A third noted that he/she was “most frustrated with the Republican Congress. They are mostly a bunch of wimps.” Yet another, noted that the president’s performance was “very good, in comparison to very poor [one] for Congress.”

More than a few comments, however, laid the blame for lack of progress with the president and his penchant for sparring with members of his own party. One respondent wrote that while he approved of the president’s legislative priorities, “he has done a very poor job managing the legislative process, communicating appropriately and representing the U.S. to the world.”

The president’s focus on Twitter came up again and again: “I believe the Democrats and Republicans have purposely stonewalled president Trump because he is an outsider. With that said, president Trump needs to grow up and stop tweeting about petty bullcrap and start running this country like a real leader!” “Needs to focus more on legislative agenda rather than tweeting and rallies,” “Has some good ideas, but doesn’t seem to have the skill set to work with Congress to implement. He seems to be intent on tweeting himself in the foot,” “Put away Twitter, grow up, quit responding to every negative comment, work with Congress, show us you can get a deal.” “There has been a general uplift in Americans’ attitude toward business and growth opportunity. That, in and of itself, has been helpful for [commercial real estate]. If we get rid of his Twitter account we would all be better off.”

A few respondents complained that a lack of cohesive messaging on the administration’s plan of action was causing uncertainty in the commercial real estate market, with investors less willing to do deals without a clear idea of potential legislative changes. The president’s performance “has been negative as he has done nothing but be in office… only causing caution for investors as they have no idea what the ramifications will be or what changes may take place,” according to one comment. The “increased uncertainty wrought by the administration has been a negative for [commercial real estate], as well as other asset classes,” according to another.

The administration’s immigration policies have also caused some concern to those in the commercial real estate industry, both in terms of potentially resulting in a shortage of skilled construction workers and discouraging foreign investors in U.S. commercial assets: “I believe his isolationist tactics and putting America first will hinder and not help foreign investment in our commercial real estate market,” wrote one of the survey respondents. Another added “He's all hot air—so not much has happened. However, very important—if foreign buyers get nervous about the U.S., that will impact [New York City real estate] negatively.”

Other comments were much more withering. “He hasn’t blown up the world yet, so I guess that’s a positive…” wrote one respondent. Another complained Trump was “giving the industry a bad name.” Yet another noted that he voted for Trump, but is now “greatly disappointed.” The word “embarrassment” came up multiple times, in reference to both Trump representing the commercial real estate sector and the U.S. as a whole. One respondent of several called the president’s performance thus far “a complete trainwreck (sic).” “He has no concept of governing, or any grasp of policy, or even any interest in either.”