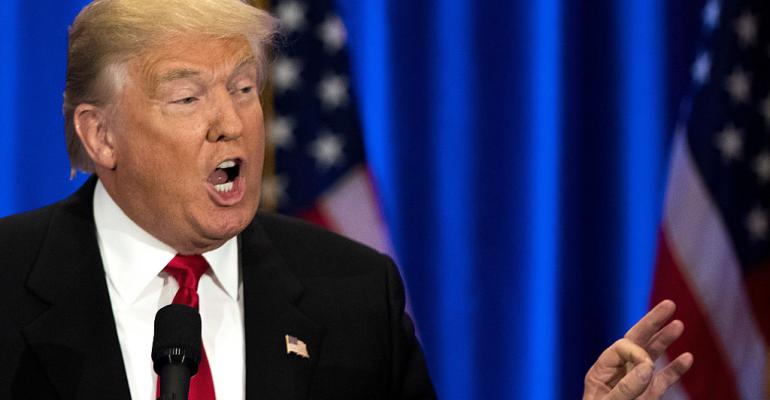 In a poll of about 900 NREI readers conducted between September 29th and October 3rd, 29.7 percent indicated they approved of the president’s performance.

The commercial real estate industry’s approval rating for president Trump has improved a bit since September. In a poll of about 900 NREI readers conducted between September 29th and October 3rd, 29.7 percent indicated they approved of the president’s performance so far, vs. 28.1 in September. On the other side of the spectrum, 56.2 percent disapproved of the president’s performance and another 14.1 percent of respondents indicated they were neutral.

In the open-ended comments section, readers’ reviews of Trump’s overall performance ranged from glowing—“Very positive. First time in eight+ years we have seen 3 percent GDP growth. This positive impacts are just showing signs. This will be a fantastic eight years,” to damning “I am sorry that I voted for him and will never do so again.”

The president’s just-released tax reform proposal received an approval rating of 36.7 percent. Slightly more of the survey’s respondents (38.5 percent) disapproved of the proposal. The remaining 24.7 percent indicated they were neutral on the proposed legislation.

However, an overwhelming majority (81.1 percent) of respondents said the proposal in its current form is not detailed enough and 76.3 percent expressed doubt the administration will be able to get tax reform passed before the end of the year. Just 23.7 percent of respondents believe the legislation will pass by that date.

In their open-ended responses a number of NREI readers expressed concern about reconciling the tax reform proposal with the need to balance the federal budget. “I am all for reducing corporate and personal taxes. But the real task of Trump’s administration and Congress will be to significantly reduce government spending,” wrote one respondent. “Since so few details have been provided, it is not possible to have an opinion,” wrote another. “My guess is that the vast majority of people will derive little or no benefit. If the federal revenue is significantly cut, it will significantly increase the deficit. If, instead, the fed budget is rapidly shrunk, it will result in a recession, not to mention many, many people and industries being hurt.” According to the third, “Certainly there are some positives, but very vague on details. When you add that it raises the deficit and without structures that truly would support job growth (like reducing the employment taxes as just one example), think it’s just another poor idea, with no thought, no policy expertise and no way it will get passed in Congress. Other than all that, I’m sure it’ll be awesome.”

The tax reform details respondents liked the most included: lowering the corporate tax rate and eliminating the estate tax. They were most concerned about the loss of 1031-exchange tax deferrals, carried interest and the elimination of deductions for state and local taxes.

Many respondents continue to feel that tax reform should be this administration’s main priority (70.5 percent), followed by infrastructure improvement (63.5 percent) and healthcare reform (50.9 percent).

To the question of which of the administration’s actions has been the most impactful on the commercial real estate industry so far, a significant number of readers pointed to the new immigration legislation.

“Deporting immigrants, even if they are illegal, will exacerbate the current shortage of construction labor, thereby raising costs and contributing to delays,” wrote one respondent. “Immigration. Can't get labor,” wrote another, while a third noted that “…the chill on immigration will be the most beneficial to CRE. And I think that a meaningful reduction in corporate tax rates will spur demand and absorption.”

The survey received a total of 906 responses. Approximately 41.2 percent of the respondents described their political affiliation as “independent,” 40.2 percent as “republican” and 18.6 percent as “democrat.” The respondents' average age was 57.