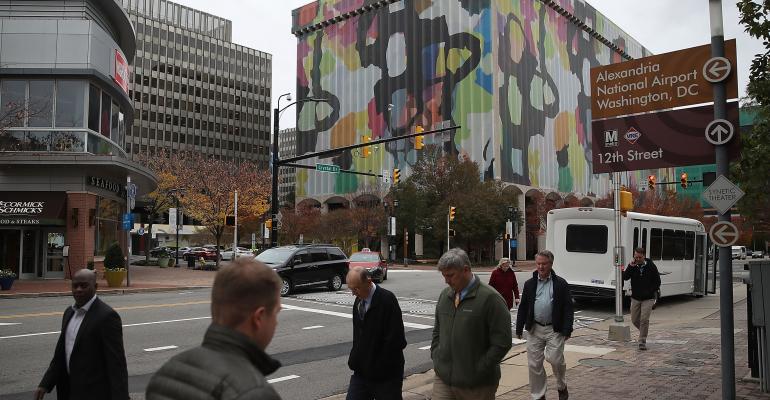 Phasing out the move-in process over 10 years should ease the strain on local office and multifamily markets, experts say.

Amazon made it official last week and picked Arlington, Va. and Queens, N.Y. as the sites of its new headquarters.

The tech giant pledged $5 billion in investment and 50,000 jobs split evenly between the two cities, in addition to agreeing to make the transition over a decade rather than all at once. In exchange, local and state officials have offered billions of dollars to Amazon in incentives.

What does this mean for these regions’ real estate markets and local economies?

Many experts believe that it was easier for Amazon to split its HQ2 campus across two metro areas—not  just to maximize the incentives the company will receive from state and local governments, but to assemble the land and employees it needs. Amazon officials said the company will utilize 4 million sq. ft. of office space in each city, with the opportunity to expand that to 8 million sq. ft. “It makes sense to split the headquarters, and there will probably be some specialization in each of them,” says Heidi Learner, chief economist at real estate services firm Savills Studley. “I wouldn’t expect the exact same business units just to be duplicated.”

Regardless, Amazon will likely dominate whichever market it occupies—as it has in Seattle. Dividing the second headquarters across two sites ensures less of a negative impact on those communities and potential pushback from neighbors who are concerned about ballooning rents, home prices and construction. “Splitting that definitely reduces that overall impact,” says Barbara Denham, senior economist at research firm Reis Inc.

Here is a closer look at how the decision will impact the Long Island City neighborhood of Queens and Arlington, Va.

Amazon has already committed to leasing 1 million sq. ft. of office space at the One Court Square tower in Long Island City, located on the western-most point of Queens and along the East River, across from Manhattan.

New York City likely will see less of an impact on its job market than the Washington, D.C.-metro area or Nashville, Tenn., which will house Amazon’s new operations center, Learner says. Twenty-five thousand workers equal about a quarter of a percent of the New York City metro area’s workforce, compared to three-quarters of a percent of the D.C.-metro area’s labor pool, she notes, citing data from the U.S. Bureau of Labor Statistics.

This increase will happen over 10 years, lessening the impact on the regions’ job markets, Learner notes. “I don’t think it will necessarily alter the backdrop that much,” she says.

For New York City overall, the addition of Amazon to its list of corporate tenants brings another plus: It no longer will be seen as mainly a global financial hub. “I certainly think this will be beneficial from a diversification perspective,” Learner says.

In Queens, there are already sites close to the ferry where Amazon could build, she notes. And there are more than 8,000 apartment units currently under construction in Long Island City. “[The growth of employees] is something the market can accommodate,” Learner says.

Queens has been undergoing gentrification already, which has led some New York Democrats to criticize Amazon’s plans to plant its next headquarters in their neighborhoods. They cited concerns like cost of living increases and state tax incentives being funneled to a large company instead of residents, CNBC reported.

For the same number of jobs, New York is offering Amazon more in incentives than Arlington. Amazon has been offered a refundable tax credit through New York State’s Excelsior Program of up to $1.2 billion over 10 years and a cash grant from the Empire State Development of $325 million; Amazon said it will apply separately for as-of-right incentives too. Meanwhile, the company will receive $573 million from Virginia and Arlington in the form of a cash grant from the commonwealth ($500 million) and a cash grant from Arlington worth $23 million. All these incentives are over time and are dependent on Amazon creating $25,000 jobs in each community.

“Amazon is receiving significantly more [from New York]. Presumably, the city stands to benefit from the commitments that Amazon is making for infrastructure and other soft offerings,” Learner says, noting that the tech giant could try to pre-empt some pushback by coming forward with community infrastructure plans. Amazon has already announced that the local community will benefit from infrastructure improvements, donated space on campus for a tech start-up incubator and a site for a new school.

Leslie Himmel, co-managing partner of Himmel + Meringoff Properties LLC, a New York-based firm that focuses on acquiring properties in emerging neighborhoods, says New Yorkers should be happy Amazon did not go to a low-tax state like Texas. “We should be delighted, because we are losing a number of private equity firms and hedge funds” since New York has become an increasingly high-tax place to live and do business in, she says.

Himmel’s firm began investing in Long Island City in 1986, when it was an area of industrial and warehouse space, with barely any residential properties. Some in the industry thought of Long Island City as a new office submarket for creative and tech professionals. “That office submarket did not take off the way a number of developers thought it was going to take off,” Himmel says.

But now, particularly over the last five years, Long Island City has seen a surge of development, with thousands of new apartment units in modern buildings coming on-line, Himmel says. And she believes that Amazon will only accelerate this growth.

The neighborhood has already been experiencing a condo-buying frenzy, the Wall Street Journal reported, and funds are being launched to focus on Queens real estate as a result of Amazon’s decision. For example, online investing platform Compound announced it is kicking off a fund to acquire and manage properties in and around Long Island City. “Developers are probably already looking at sites to buy,” Denham says.

Experts think affordability in the region will only continue to worsen. But since Amazon is looking to add workers over several years, the true impact may not be felt for some time to come. It’s also expected to spur general economic growth, as Amazon acquires equipment and uses services as it enters the market. “It’s hard to quantify all of that, but the impact is significant and it will be over time,” Denham says.

With its choice of Arlington, Amazon re-branded an outdated, previously government-focused office park called Crystal City as “National Landing,” which already has some locals scratching their heads. National Landing includes a portion of Pentagon City and a part of Potomac Yard. Crystal City is undergoing a renovation, spearheaded by office REIT JBG Smith Properties, which stands to benefit thanks to Amazon’s pick.

Should Amazon fulfill its promise to add 25,000 jobs to the region, located south of the capitol, it could also create a multiplier effect there, adding around 41,000 jobs, including indirect and induced jobs, according to an analysis by real estate services firm Transwestern and economic consulting company Sage Policy Group Inc.

And the Washington, D.C. area should be able to handle such employment growth, even if it is mainly in the technology jobs field. “Washington, D.C. does have a growing tech presence that will support the 25,000 [jobs],” says Elizabeth Norton, managing research director for the Mid-Atlantic region at Transwestern.

Transwestern and Sage’s analysis also notes that “the Washington metro area routinely adds more than twice that many jobs in a given year.”

Crystal City will see much of its office space absorbed, Norton says. But given that Amazon is aiming to make its presence a fixture over 10 years, it should also be a relatively smooth transition. “We do anticipate that rents will rise as space tightens,” Norton says. Transwestern’s and Sage’s analysis found that rents could likely grow by 4 percent to 5 percent annually as space becomes absorbed.

However, to accommodate such growth, more space will need to be constructed. There is 2.2 million sq. ft. of available office space in the Crystal City/Pentagon City submarket as of the third quarter, according to the analysis. The overall vacancy rate could drop to 7.2 percent by the end of Amazon’s plan; today it is 15.5 percent.

Crystal City is not the only place that will benefit. There will likely be a spillover effect into neighboring areas, such as the Rosslyn-Clarendon-Ballston Corridor. In this region, the office vacancy could fall to 16.1 percent by the end of Amazon’s third phase of move-in from 20.3 percent today, triggering rent increases by 2 percent to 3 percent per year, according to the analysis.

However, the region lacks a lot of single-family properties, and it’s a relatively expensive area to rent, says Brad Dillman, chief economist at Atlanta-based Cortland, a multifamily owner and operator with properties mostly in the Southeast. With the area known for its low multifamily vacancy rate, Dillman says he expects to see some speculation in the market, for rents eventually to rise and more supply to come on-line. “It’s not going to happen overnight, so there’s going to be a little bit of runway,” Dillman notes.