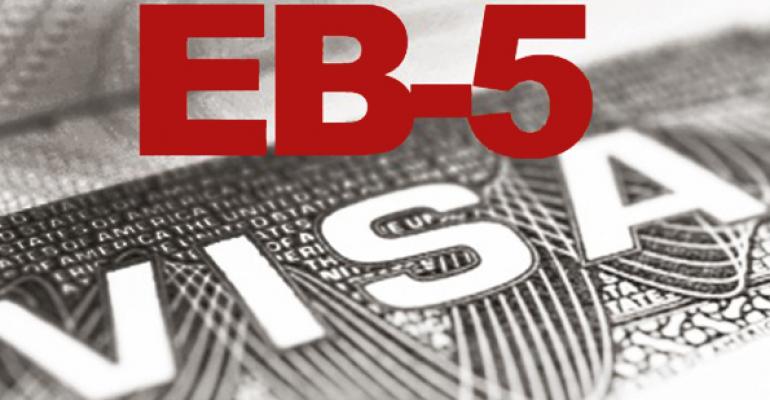 Seasoned developers who have used EB-5 previously are still very active in the market.

The discussion of the EB-5 Immigrant Investor Program has been squarely focused on gridlock on reforms that have been dragging out for the past two years. But while Congress continues to delay any concrete decisions on modifications to the program, it has been full steam ahead for developers looking to access the low-cost source of capital.

The cloud of uncertainty surrounding reforms and long-term renewal of the program is acting as a deterrent for developers who are new to the program. However, seasoned developers who have used EB-5 previously are still very active in the market, says Roy Carrasquillo, a member of the immigrant investor program services and compliance practice at Cozen O’Connor in New York City.

“Despite the challenges and despite the fact that we know this law is in a state of uncertainty, the environment for EB-5 is very healthy,” notes Julian Montero, a partner and vice chair in the Miami office of Saul Ewing Arnstein & Lehr LLP and a member of the firm’s corporate transactions & counseling practice group and immigration practice group. Saul Ewing Arnstein & Lehr currently has two developer clients that are in the process of finalizing documents for hotel projects in Southern Florida. “So there is still activity in EB-5 despite all of the noise,” he says.

First introduced as part of the 1990 Immigration Act, EB-5 is an incentive program for foreign investment into the U.S. that trades green cards for capital. Typically, EB-5 money is used to finance economic development and create jobs, especially in urban areas with high unemployment. The most recent data available for 2013-14 shows that more than 11,000 immigrant investors provided $5.8 billion in capital for 562 active EB-5 projects that produced a combined 174,000 jobs, according to a January 2017 report from the U.S. Department of Commerce.

Although potential reforms have been dominating much of the conversation about EB-5, the niche market has been adapting to other major shifts in the marketplace. The big draw for developers is that EB-5 represents a low cost source of mezzanine capital, with a cost of about 5 to 7 percent as compared to the 10 to 12 percent that is more the norm for mezzanine financing. Developers have been working harder to expand the EB-5 investor pool as interest has cooled from Chinese investors. China has been a dominant source of EB-5 capital, representing about 75 percent of the market, notes Montero.

Each country is allocated a certain number or share of EB-5 visas that its citizens can obtain. Once that maximum amount is reached, the visas go into a process of retrogression, effectively a logjam with people waiting longer to obtain their visas. China hit its retrogression in 2014. “This factor is certainly causing a chilling effect for the Chinese investor who would have to make their investment today and potentially wait seven to 10 years or more before they would get the benefit of their resident status,” says Montero. The typical wait time for investors from other countries is five to seven years.

That pullback from Chinese investors is forcing developers to expand the scope of EB-5 fundraising efforts to other countries, and it is also reducing the size of fundraising amounts. In the past, developers would market very large deals in China of $50 million to $100 million. It is taking longer to raise those larger dollar amounts. So the deal size is shrinking to $5 million to $25 million, and developers are more actively marketing deals in other countries. Regions that have become increasingly active include Latin America, such as Venezuela, Columbia and Brazil, as well as India and some countries in the Middle East.

On a positive note, one sign that the EB-5 market is maturing is that more alternative lenders are comfortable stepping into the gap to provide bridge financing for EB-money, notes Carrasquillo. EB-5 money can take more time to assemble and the bridge lenders allow a project to commence while that EB-5 money is falling into place. Raising EB-5 capital requires compliance with U.S. securities laws and it typically takes about nine to 12 months to assemble.

Since the EB-5 program officially expired in September 2015, it has received a series of short-term extensions as Congress has worked to come to terms on proposed reforms. The latest extension is set to expire on Dec. 8. It would be surprising if the program didn’t receive another short-term extension sometime in the next few weeks.

Part of the delay on reforms and a long-term renewal is simply due to the fact that Congress has had a lot on its plate with healthcare reform, the broader issue of immigration reform and now tax reform. “We all know that there are a lot of bigger issues that Congress and politicians in general are dealing with right now,” says Montero. Most legislators agree that modifications are needed, but they have yet to come to terms on specific details of those changes.

Reforms are expected to include an increase to the current investment amounts. Foreign nationals can qualify for a visa by investing a minimum of $1 million in a development, or $500,000 if it is invested in a qualifying Targeted Employment Areas (TEAs). Those minimum amounts have not changed since the program was first introduced in 1990. It is widely expected that those levels will increase, though it’s not yet clear by how much.

Another sticking point is the definition of qualifying TEAs. The whole premise behind EB-5 investment is to spur economic development and job growth in blighted or needy areas. Ninety-nine percent of EB-5 projects are located within bigger states and cities such as California and New York. “I think that EB-5 is here to stay. The benefit that brings for job creation and economic development, at no cost to taxpayers, is something that is really valuable,” says Carrasquillo. “But at the same time there is tension where different states have different interests.”

A third important piece to the reform will be more compliance and oversight. Those reforms will help a more mature EB-5 program resemble more traditional financing, which will be good for the program, adds Carrasquillo. “Particularly on that point, a lot of developers and people using EB-5 capital within their projects are already implementing those best practices and those financially sound compliance and oversight measures,” he adds.

Editor's note: The original version of this article identified Julian Montero as a partner with Arnstein & Lerh LLP. The firm recently merged with another company and is now Saul Ewing Arnstein & Lerh. The article has been updated to reflect the change.
TAGS: News
0 comments
Hide comments
Related
Sponsored