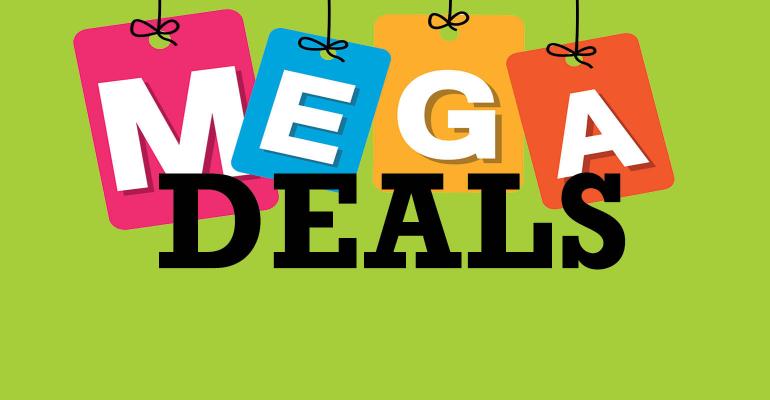 Start Slideshow ›
The flurry of investment deals is a notable shift for an industry that appeared to be bracing for a slowdown.

The year is not even at the half-way mark and it is already proving to be a big year for billion-dollar transactions. And there are likely more mega-deals on the horizon that could give transaction volume an added lift.

The flurry of investment deals is a notable shift for an industry that appeared to be bracing for a slowdown. Transaction volume has been on a gradual downward trajectory after hitting a post-recession peak of $546 billion in 2015. Annual sales dipped to $495 billion in 2016 and $468 billion in 2017 and were forecast to slide to $450 billion this year, according to the ULI Real Estate Consensus Forecast released in April.

“It’s likely that 2018 will see an uptick in investment activity as these big deals tend to add up very quickly,” notes Rene Circ, director of CoStar Portfolio Strategy. A few years ago, in 2015, the industry saw a similar spike in transaction volume due to a series of large portfolio deals. For example, Blackstone sold IndCor Properties to an affiliate of the Singapore sovereign wealth fund GIC for $8.1 billion, while Prologis and Norges Bank bought the KTR Capital portfolio for $5.9 billion.

Mega deals slowed in 2016 and 2017, but it wasn’t due to lack of interest, says Circ. It was more a situation where some large portfolios traded, and it has taken time for sellers to create new portfolios or add value to better position portfolios for sale, he notes.

Real estate is likely being swept along in a broader resurgence in M&A activity that is occurring across sectors with e-commerce, logistics and technology being some of the notable leaders. “We have waited a long time for this M&A activity to unleash again,” says K.C. Conway, chief economist for the CCIM Institute. “We have yet to get back to pre-2007 levels, but it is increasing largely due to both the Tax Act and deregulation by the Trump Administration,” he adds. Conway also serves as the director of research and corporate engagement at the Alabama Center for Real Estate at the University of Alabama.

Recent acquisition activity is another sign that companies have plenty of capital available to fuel more growth. Global private equity real estate funds had an estimated $266 billion in dry powder available for investment as of March 2018. This represents a nearly 7.0 percent increase over the dry power available at year-ed 2017, of which over 60.0 percent was focused on North America, according to consulting firm PwC. “It’s not surprising that with asset values on individual acquisitions priced fully that we’re seeing acquirers with dry powder and balance sheet capability turn to business combinations through M&A in order to find growth,” says Byron Carlock Jr., U.S. real estate leader at PwC.

PwC noted in its Q1 Deal Tracker report that real estate deals during January and February were on par with those of 2017. Deal value of $61 billion was down a slight 1.0 percent compared to the same period in 2017, while the number of deals closed—4,581—was up by 2.0 percent. However, mega deals announced in March, April and May from the likes of Brookfield Property Partners, Blackstone and Prologis will likely give deal volume a significant boost.

In addition, there is still a lot of capital in the market looking for a place to go, including foreign capital that is targeting U.S. real estate, adds Conway. Investors like tangible earning assets like real estate that perform better against inflation and rising interest rates, and geo-political issues in Iran, North Korea and the Middle East are also pushing foreign investors to look for a safe haven for capital, he says.

According to Conway, companies also have more capital available as a result of tax cuts. For example, at Berkshire Hathaway’s annual stock holders meeting in Omaha, Warren Buffet noted he is sitting on $120 billion in cash to deploy as a result of the Tax Act compared with $30 billion a year ago. Buffet also said that his biggest challenge is identifying good places to deploy the cash and he is limited in how much he can roll into companies he already owns at Berkshire. So real estate is looking quite attractive again, says Conway.

Some of the M&A deals that have occurred in the public REIT sector have been fueled by lower net asset values. Private equity firms in particular are counting on the fact that valuations in the public space may be misstated. In addition, there may be an opportunity for private buyers to realize added value by leveraging assets higher than what public REITs typically allow. Most public REITs maintain lower leverage on assets, often below 50 percent, as compared to private owners that may lever up to 65 or 70 percent.

“Even though the cost of debt has been going up, it is still relatively cheap by historical standards,” says Carlock. “So the arbitrage from higher leverage and lower public valuations gives the private equity investors potential upside through eliminating public company costs, levering up the portfolio and potentially realizing some G&A savings (general & administrative spending).”