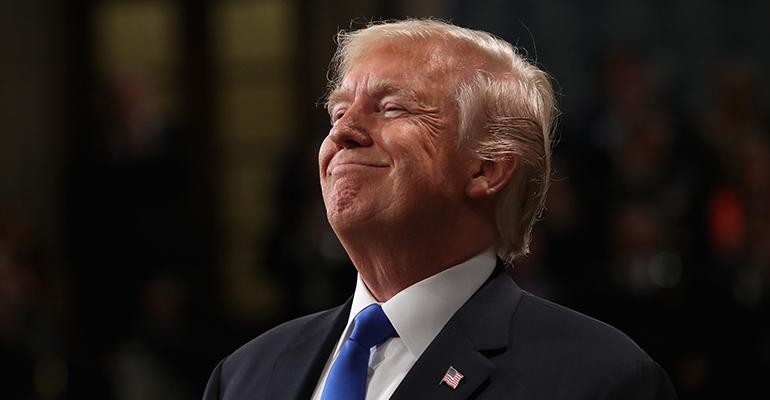 A survey of 887 NREI readers administered on Feb. 1-2 found that 52.8 percent now approve of the president’s job performance vs. 29.7 percent who approved of his performance in early October.

President Trump’s approval rating in the commercial real estate industry improved considerably since the passage of the Tax Cuts and Jobs Act of 2017, the most recent NREI poll shows.

When it came to the tax reform legislation, which was passed right before the beginning of the new year, a full 57.5 percent of survey respondents approve of the measure. Another 29.3 percent disapprove of the tax reform and 13.2 percent say they are neutral on the topic. That was a marked jump from sentiment prior to the bill’s passage. With the details available at the time, just 36.7 percent of respondents approved of the proposed tax reform in the previous survey.

In an open-ended comments section, respondents’ reactions to the tax reform legislation ranged from “amazing” to “it is great and should stimulate the economy and foster growth in all sectors” to “I don’t believe sufficient study was given to the impact of the bill on commercial real estate and the economy generally. It’s 1986 all over again.”

With tax reform passed, legislation of most urgency to commercial real estate insiders now appears to be infrastructure improvement. Overall, 65.0 percent of respondents indicated it should be the president’s main priority, ahead of any other legislation. Healthcare reform came in second, with 52.8 percent of respondents indicating it should be the administration’s top priority, followed by immigration/border control (47.8 percent). While the numbers on infrastructure and healthcare were more or less in line with previous surveys, the response on immigration was more than double the number in the October survey.

However, a majority of respondents—53.3 percent—continue to feel there are not enough details available right now to judge the president’s infrastructure improvement plan, vs. 38.6 percent who approve of the plan and 8.1 percent who disapprove of it.

Lastly, in terms of potential changes to Dodd-Frank regulations, 44.8 percent approved of Trump’s plans, while 23.6 percent disapproved and 31.6 percent said there was not enough information. Those results were consistent with the previous two surveys.

When it came to expressing their views on the president’s overall performance, many respondents continued to express frustration with Trump’s message delivery, even when they felt positive about his achievements. “Other than his inability to control his outbursts and tweets, he has done a good job,” wrote one. “Outstanding for substance, not so good on communicating things,” wrote another. “He is doing a lot of very good things. I wish he could tell us about them in a better way and refrain from sticking his foot in his mouth so often.” A third noted that “Someone needs to cancel his Twitter account.”

Overall comments ranged from “I think he has been great for every aspect of business and the economy in ways not seen since Reagan” to “He is running a chaotic, divisive presidency that is not good for long-term stability, but from a narrow view, commercial real estate has come out well so far” to “Short-term good. From any perspective, destructive long-term—racially divisive, drives up cost of labor, damaging to environment, reduces our competitive standing and ultimately our attractiveness to and demand from foreign residents.