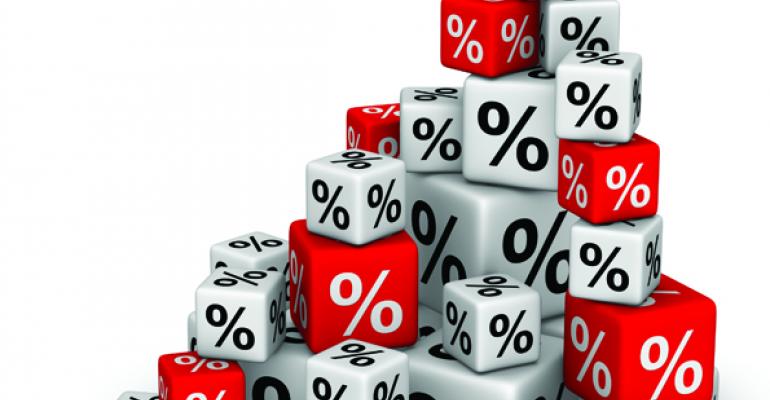 The Fed’s shift to a neutral position on rates could keep CRE transaction activity on par with 2018 levels.

The current Goldilocks economy—not too hot and not too cold—is helping to keep the bears from emerging in the commercial real estate sector. In a move aimed at holding on to that warmish balance, the Fed confirmed during its May 1 meeting that it would not change rates. That move is expected to fuel another strong year of transaction activity. At the same time, it is stirring speculation about what action the Fed might take in the fourth quarter.

The Fed has become more dovish on rates, essentially changing its policy from one where it was likely to raise rates two or three times in 2019 to a more neutral position, and capital markets have gained confidence from that shift. “December and January were tough months for the economy and the commercial real estate business, because consumer confidence tanked and business confidence tanked along with the stock market,” says Spencer Levy, chairman of Americas research and senior economic advisor at real estate services firm CBRE.

The rebound in the stock market has strengthened both consumer and business confidence. “We would expect that as rates stay low, that confidence is going to remain,” adds Levy.

The Fed would like to keep raising rates in an environment where unemployment is extremely low and wage growth is accelerating. Yet core inflation is not moving. On the other side, GDP and job growth put the economy in a strong position where the Fed doesn’t see the need to cut rates either, says Ryan Severino, chief economist at real estate services firm JLL. “So, they’re just sitting there for the time being looking for a little more clarity on either a more pronounced slowdown in the economy, or a re-acceleration in inflation,” he says.

Volatility and uncertainty on rates did weigh on investment activity during first quarter, with sales volume that dropped 11 percent, according to Real Capital Analytics, a New York City-based research firm. The latest Fed decision is giving commercial real estate investors more confidence in the economy. Underlying property fundamentals remain strong, the cost of capital remains low and investors still have a lot of capital that needs to be deployed. “So, I would expect there to be a re-acceleration of transaction activity in the back half of the year,” says David Bitner, vice president, Americas head of capital markets research for real estate services firm Cushman & Wakefield.

“I think we’re going to have about the same amount of transactions this year as we had last year, because the capital markets remain deep and liquid,” says Levy. In addition, while certain parts of the commercial real estate market may be near the peak, there is still a lot of momentum and opportunities that exist in newer markets like Nashville, Tenn., Orlando, Fla. and Kansas City, notes Levy.

One question is how the Fed position on rates and the recent decline in the 10-year Treasury could impact cap rates. Overall, cap rates have been on a plateau for the past couple of years, moving only about 20 basis points. Even with the recent dip in the 10-year Treasury, there is not a lot of room for cap rates to move lower, notes Bitner. People generally don’t have the risk tolerance that would be needed for rates to compress further, he adds.

Will the Fed cut rates?

JLL’s outlook for this year is that the Fed will likely remain neutral on rates through 2019. Core inflation could accelerate a little as the year progresses, but likely not enough to trigger a rate increase, notes Severino. “At the same time, I don’t see the economy deteriorating enough where the Fed would have to cut rates,” he says.

GDP growth improved to 3.2 percent in the first quarter and JLL is predicting that growth will slow throughout the year as stimulus from tax reform starts to fade to end the year at GDP growth around 2.0 percent. However, there are some factors that could push the Fed out of that neutral position, such as acceleration in core inflation, wage growth and other signs of overheating in the job market.

What is interesting is that the Fed Funds Futures market and the equity market both reacted negatively to the recent Fed decision as both expected the Fed to cut rates. Those expectations to cut rates don’t appear to make a lot of sense when the economy is growing at a rate that is above trend and unemployment is at a 50-year low, notes Severino.

“I think the Fed has been very dovish, but at the same time, they have been careful to make sure the market understands they are not immediately planning to cut rates,” says Bitner. However, that has not deterred growing sentiment that a rate cut may be in the cards for later in the year. According to CME FedWatch, expectations for a Fed rate cut rise to 26 percent for the September meeting, 42.2 percent for October and 60.1 percent for the December meeting. Growing sentiment in favor of a rate cut is due to concerns about trade tariffs and elevated recession risk.

Looking out over the 12- to 18-month horizon, Severino believes it is more likely that the Fed will raise rates again before they make any moves to cut rates. “I’m not saying they will raise rates necessarily; I just don’t see as much risk to the downside of the economy as I see a chance that the Fed think rates need to be higher going into the next downturn,” he says. Either way, the Fed is likely close to the end of its tightening cycle, he adds.