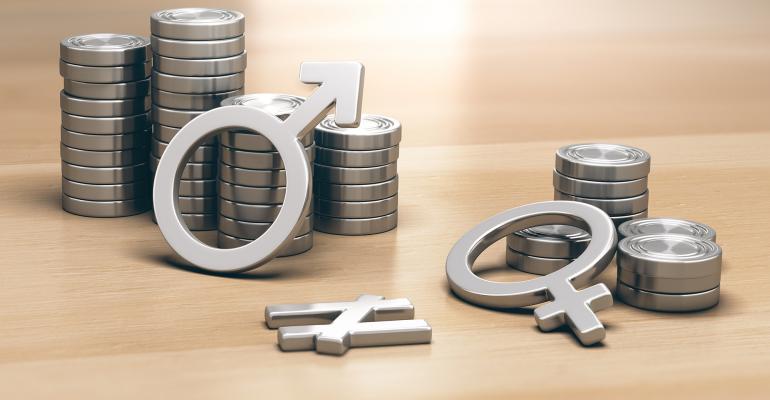 While there has been some progress, there is a long way to go to close the gender pay gap in commercial real estate, according to a new white paper that takes a broad look at gender and pay in the industry.

The paper, from the Commercial Real Estate Women Network (CREW), a professional association for women in the industry, found that women are still being paid less than men in commercial real estate, a divide that begins when women reach mid-level positions and continues at the executive level.

“Even after all of these years studying the gap, it hasn’t closed significantly and … we still have a lot of work to do,” says Julie Sorensen, industry research committee co-chair at CREW and director at GRS Group.

The paper cites data from its 2015 benchmark study on pay in commercial real estate, which found that men in the commercial real estate C-suite positions earn 29.8 percent more than women in the same roles, with the median total income disparity at 23.3 percent. But the pay gap starts earlier, when a woman reaches the mid-level of her career, in her late 20s to 30s, when she may be getting married or starting a family, the report states. “Even if a woman and a man start out at roughly the same pay level at the outset of their careers, it just seems to continue to widen,” says Sorensen.

The research supports the findings of another recent study by commercial real estate recruiting firm RETS Associates, wrote Jana Turner, a principal at the firm, in an email. RETS’ survey of more than 618 women in the industry found that 87 percent agree the biggest issue facing female professionals in the space is equal pay. A lack of promotion opportunities and feeling that female opinions aren’t valued as much as those of men followed close behind.

These issues were highlighted last week when a former Cushman & Wakefield executive filed a complaint against the real estate firm, alleging that gender and racial discrimination led to roadblocks in her career advancement and eventual termination. (Cushman & Wakefield said it does not comment on litigation.)

“Equal pay and opportunity discrimination are important issues that should be reviewed by industry leaders with the intent to make significant progress in 2019 and beyond,” Turner wrote. “Unfortunately, commercial real estate lacks some fundamental progress made in other industries. With that said, it’s up to our leaders to address these issues immediately.”

While much of the CREW paper’s data focuses on its 2015 research results, the paper notes that there is a new factor at play in the fight for pay parity: the groundswell of social movements that aim to raise awareness of sexual harassment, abuse and inequality in workplaces across the corporate spectrum. And some governments are adopting legislation to address pay parity; the United Kingdom, for example, last year mandated that companies with 250 employees or more disclose their gender pay data annually.

“Commercial real estate, like all other industries, we believe [is] under greater pressure to address it now,” says Laura Lewis, chief marketing officer at CREW.

Shannan Morgan, chief development officer at female-run Shelborne Development in Michigan, says as she advanced through her career in the development field, which is heavily male-dominated, it was hard to have a voice and, often, get credit. “It was really hard to command respect,” she adds.

In her 23 years of development experience, she has seen “quite a disparity of pay.” But Morgan notes she sees that gap closing and more women seeking leadership positions. “I think there’s been a lot of forward progress,” says Morgan, who also serves as co-chair of the Urban Land Institute Michigan Women’s Leadership Initiative.

The CREW white paper lists a range of actions that company leaders, human resources departments and women professionals can do to help achieve pay parity.

For leaders, this includes promoting more women to corporate leadership and board roles; tying bonus incentives to gender equity goals; and partnering with pay equity consultants to remediate pay issues quickly and objectively.

Human resources professions can develop gender-neutral benefits packages that allow for paid parental and caregiver leave; create training programs to build awareness around unconscious biases; and determine starting pay based on skills, abilities and experience, among other actions.

And women can, among other things, engage in negotiation training and mentoring through professional associations; influence employers and legislators through activism and advocacy; and research the market rate of compensation for their positions and negotiate assertively for that compensation.

The CREW report also underscores how gender equality helps businesses perform better, says Megan Abraham, executive director of The Goldie Initiative, an organization that provides scholarships, executive mentoring and networking to women in commercial real estate. She adds, however, that the report could go even further in providing actionable suggestions specific to commercial real estate. This could include, for example, focusing more on educating women that commercial real estate is a viable career path—as many women tend to fall into the business without planning to—and the importance of networking in an industry that relies heavily on connections. “If women knew what to expect when going after a career in commercial real estate, then they could very well succeed,” she says.

Morgan’s key advice to young women looking for a career in commercial real estate is to be persistent and seek out peer groups and networks. “Make sure you have a voice in the conversation,” she says. “There are a lot of strong women in real estate right now that are providing leadership and mentorship, and that’s a tremendous resource.”