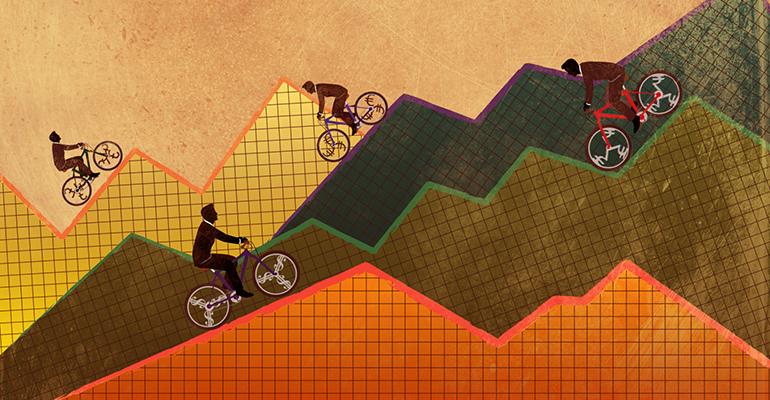 If implemented, Trump’s tax plans will leave “some winners and some losers,” according to Philip A. Marra, the U.S. real estate funds leader for KPMG. Trump’s policies might also impact the strength of the dollar. That could, in turn, have a negative effect on capital flows to U.S. real estate from foreign investors, making it more expensive to invest stateside, but less expensive for U.S. investors to invest abroad, he says.

Changes in property values this year, whether they trend up or down, will be moderate from a macro market perspective, according to Marra. If pricing remains strong, an additional 25 basis points increase in interest rates should not cause major dislocation in the market.

A majority of survey respondents view the real estate market favorably in 2017, but say deals are hard to find, according to KPMG.

Respondents appear confident in the strength of their markets and U.S. commercial real estate as a whole, but see macroeconomic issues (and inability to find investments that can deliver desired returns) as threats to their business growth in 2017. As a result, many organizations are looking to scale back on risky strategies and are underwriting lower yields, KPMG asserts, but they are by no means slowing investment.

Real estate executives are also beginning to embrace new technologies to streamline their businesses. Nevertheless, cyber threats and disruption only account for 10 percent of their worries. “Commercial real estate is a little bit behind on the curve when it comes to this,” according to Marra.

On the technology front:

Capital availability is expected to grow in 2017. This year will mark high growth in the open-ended fund and debt fund space, KPMG anticipates.

Among tips to “sustain the boom,” KPMG advises commercial real estate firms to maintain a robust compliance program, strengthen cybersecurity capabilities, diversify talent and grow networks of private lenders to improve financing prospects. “Real estate developers should consider private lenders as a potential source of financing, as they may be more willing to meet capital needs, especially funding for riskier projects and to less-established borrowers,” the firm says in its report.